Please ensure Javascript is enabled for purposes of website accessibility
Log In Help Join The Motley Fool
Free Article Join Over 1 Million Premium Members And Get More In-Depth Stock Guidance and Research
By Alex Carchidi - Apr 24, 2021 at 8:15AM

With one regulatory hurdle cleared and one to go, the company is closer to success than ever before.

The ambitious Nano-X Imaging (NNOX -1.68%) is angling to disrupt the X-ray imaging market with its low-cost X-ray hardware and a business model based on charging for each scan rather than each machine. And, since a live demonstration of the device at a conference several months ago, investors have hard proof that the company's product can actually perform X-rays. Now, the growth story is poised to begin with gusto, and Nano-X's current shareholders should be practically salivating.

In particular, there are three positive things that could be highly lucrative for investors. Let's dive in and examine each one. 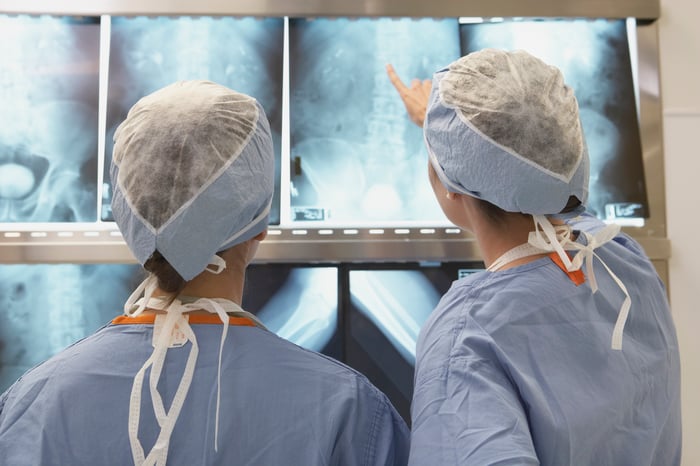 1. The Nanox.ARC just cleared a key regulatory hurdle in the U.S.

On April 2, the U.S. Food and Drug Administration (FDA) gave Nano-X a 501(k) premarket notification clearance. This means that regulators agree that a prototype version of the company's X-ray device, the Nanox.ARC, can provide medical imagery that is equivalent to other devices with a single X-ray tube that are already on the market. It also means that the FDA assents to the Nanox.ARC's commercialization for X-rays performed with a single tube, which is a big deal.

In short, this clearance means that Nano-X is on the right track to proceed with shipping the first of its Nanox.ARC devices in the fourth quarter of this year. But there is still one important complication. The version of the Nanox.ARC that is intended for mass production has more than one X-ray tube, so it still needs to be approved as being equivalent to other multi-tube devices. So, later in the year, the company will submit a similar 501(k) application. Given the recent approval, it's hard to see how the FDA would turn the application down.

2. Investors won't need to wait much longer for the first post-launch revenue report

For the moment, Nano-X is still a company without any form of revenue. But if things continue on their current trajectory, by this time next year, it will have reported its first quarter of revenue from use of the Nanox.ARC. The first shipments will start at the end of this year, and manufacturing capacity is already scaling up. And, by the middle or end of 2022, investors will finally be able to see how much the company's customers are using the device.

While a wait of more than a year may seem substantial, consider it an opportunity to practice your buy-and-hold investing skills. The market can't react to information that it doesn't have, so those who invest right now could make significantly more money by being willing to take the risk that the market's expectations don't play out.

3. Management may be underestimating the magnitude of future recurring revenue

By 2024, management expects that there will be at least 15,000 devices deployed worldwide, which assumes about 10,000 new orders beyond the deals that are already on the books. Each installed device is a long-term stream of recurring revenue, given that customers will pay for each X-ray they perform. That could eventually total as much as $397 million per year, by management's estimation.

But that estimate assumes that on average, customers will only use their Nanox.ARC devices for 20 X-ray scans per day, and also that there won't be any scans on weekends. Plus, the estimated global average number of X-ray scans per machine per day is actually 60, not 20. Why would Nano-X's customers use their brand-new devices only one-third as much as existing systems?

The ultimate answer could have something to do with the fact that the company is aiming to expand the market for X-ray devices to include customers who can't currently justify the high up-front costs of an older model. Still, it's entirely possible that revenue from scans could be better than expected when the Nanox.ARC hits the real world.