Please ensure Javascript is enabled for purposes of website accessibility
Log In Help Join The Motley Fool
Free Article Join Over 1 Million Premium Members And Get More In-Depth Stock Guidance and Research
By Lou Whiteman - Apr 27, 2021 at 10:39AM

Jeff Bezos' space start-up claims NASA changed the rules in the middle of the competition.

Jeff Bezos' Blue Origin has filed a protest with the Government Accountability Office (GAO) against NASA's decision to award a nearly $3 billion contract to rival SpaceX, arguing NASA "moved the goalposts" and made a "high risk" decision with the award.

NASA earlier this week awarded SpaceX $2.9 billion to develop the human landing system for the space agency's Artemis program, its plan to return to the moon in the coming years. SpaceX beat out competing designs from Leidos Holdings (LDOS 1.71%) subsidiary Dynetics and Blue Origin. 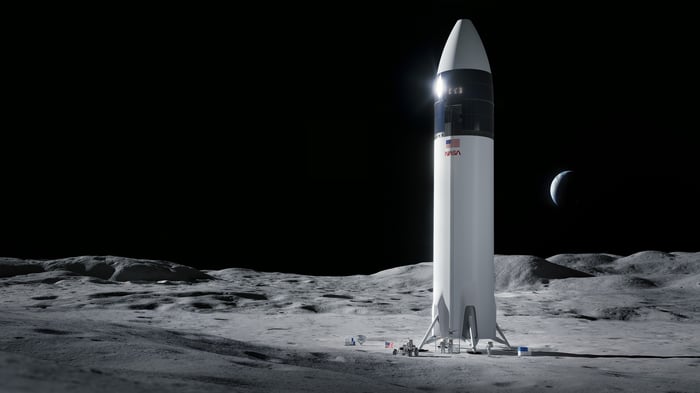 A rendering of the SpaceX StarShip on the moon. Image source: SpaceX.

The award was a surprise, as NASA had originally planned to pick two finalists to ensure redundancy. But the agency said it ended up as a winner-take-all contest because it didn't have the funding to support multiple contractors.

In its protest, Blue Origin said its bid was $5.99 billion, which is indeed significantly above the SpaceX total. But the company, which was working with Lockheed Martin (LMT 2.56%) and Northrop Grumman (NOC 3.77%), said that NASA changed what it was looking for midstream, and failed to tell it ahead of time.

"Blue Origin was plainly prejudiced by the Agency's failure to communicate this change in requirements," the company said in its protest. "Blue Origin could have and would have taken several actions to revise its proposed approach, reduce its price to more closely align with funding available to the Agency, and/or propose schedule alternatives" had it been aware of NASA's constraints.

In a statement to the media, the company also criticized NASA's decision to go with one vendor, saying it could put the entire Artemis project in jeopardy.

"In NASA's own words, it has made a 'high risk' selection," Blue Origin said. "Their decision eliminates opportunities for competition, significantly narrows the supply base, and not only delays, but also endangers America's return to the Moon. Because of that, we've filed a protest with the GAO."

Protests of major government awards are common, and some are overturned. But given the difference between the bids, the GAO would likely have to determine the entire process needs to be overhauled and restarted to reverse NASA's decision.