Please ensure Javascript is enabled for purposes of website accessibility
Log In Help Join The Motley Fool
Free Article Join Over 1 Million Premium Members And Get More In-Depth Stock Guidance and Research
By Keith Speights - Apr 28, 2021 at 6:01AM

Amgen (AMGN -0.60%) has taken investors on a roller coaster ride over the last 12 months. The stock has experienced multiple swings -- up and down -- of 10% or more. And now it looks like another downturn could be on the way.

The company announced its first-quarter results after the market closed on Tuesday. Investors weren't happy with Amgen's report, and the biotech stock fell nearly 4% in after-hours trading. Here are the highlights from Amgen's first-quarter update. 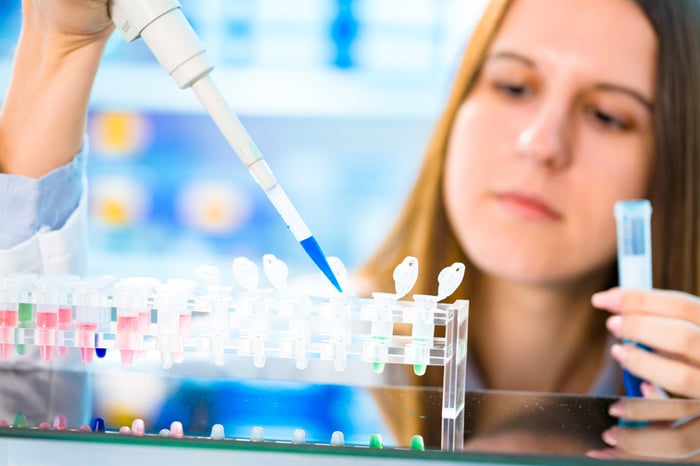 Amgen reported revenue in the first quarter of $5.9 billion, a 4% year-over-year decline. This result fell short of the average analysts' revenue estimate of $6.25 billion.

The company announced net income for the quarter of $1.6 billion, or $2.83 per share, based on generally accepted accounting principles (GAAP). In the prior-year period, Amgen generated GAAP earnings of $1.8 billion, or $3.07 per share.

Amgen continued to feel a negative impact from the COVID-19 pandemic in the first quarter, especially in January and February. This showed up in the sales results for several of the company's drugs. Of its five top-selling products, four experienced year-over-year sales declines.

Enbrel remained Amgen's best-selling product. However, sales for the autoimmune disease drug plunged 20% year over year to $924 million. Sales for bone marrow stimulant Neulasta sank 21% to $482 million due to increased biosimilar competition. Autoimmune disease drug Otezla, which has been a growth driver in the past, generated sales of $476 million, down 1% year over year. Sales for bone health drug Xgeva slipped 3% to $468 million.

The big biotech maintained its previous full-year 2021 revenue guidance of between $25.8 billion and $26.6 billion. It also left its adjusted earnings outlook unchanged at $16 to $17 per share. However, Amgen lowered its full-year GAAP earnings guidance. The company now expects GAAP earnings per share will be between $9.11 to $10.71, down from its previous outlook of $12.12 to $13.17.

Amgen stated that it anticipates "continuing disruption from COVID-19 in the second quarter and, to a lesser degree, in the second half of the year." The company thinks, though, that the widespread availability of vaccines could lead to improving conditions.

It won't be surprising for Amgen to use its hefty cash stockpile of $10.6 billion to bolster its pipeline. The company completed the acquisition of Five Prime Therapeutics earlier this month for $1.9 billion. The company also recently announced that it's buying start-up Rodeo Therapeutics for $55 million.