Please ensure Javascript is enabled for purposes of website accessibility
Log In Help Join The Motley Fool
Free Article Join Over 1 Million Premium Members And Get More In-Depth Stock Guidance and Research
By Rekha Khandelwal - Apr 29, 2021 at 8:06AM

Investors are optimistic about the company's lithium operations.

Although Albemarle (ALB -1.83%) has been producing lithium for over a century, investors' excitement for the stock has only recently begun to really heat up. Expectations of rapid growth in the electric vehicle market have been pushing the company's shares higher, lithium being a key component of those vehicle's rechargeable batteries.

Albemarle stock has risen 162% in the past 12 months, as of this writing. However, it's now roughly 10% below the peak it touched early this year. Does that make it a buy?

A growing market for lithium

Largely due to soaring electric vehicle production and sales, annual lithium demand is expected to nearly quadruple to more than 1.1 million tons of lithium carbonate equivalents (LCE) by 2025 from roughly 300,000 tons in 2020. According to company management, around 68% of total lithium output is consumed by batteries right now. Lithium demand for batteries is expected to account for 85% of that 1.1 million tons in 2025. And by 2030, batteries are expected to account for 92% of lithium being used. 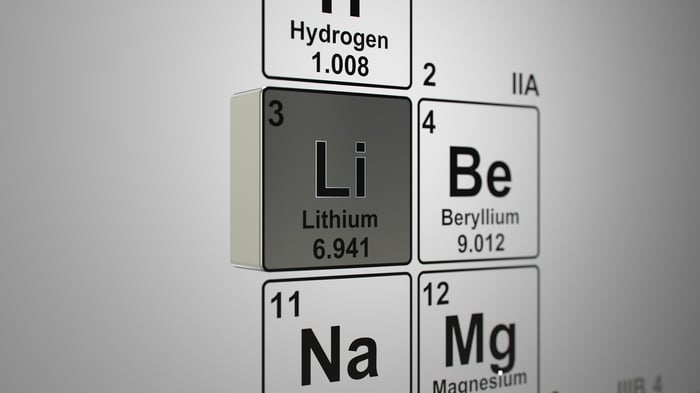 As a top lithium producer, Albemarle stands to gain from this demand growth. However, investors should also consider the supply side of the equation. There is no dearth of lithium. In fact, an oversupply caused prices to tumble between 2018 and 2020, resulting in significant declines in producers' profits and their stock prices.

As a result, suppliers cut production and deferred projects. This brought demand and supply more into sync, strengthening lithium prices so far in early 2021. The long-term prospects for the commodity look bright because the demand for lithium is likely to continue growing at a healthy rate over next several years and demand-supply imbalances will be short-term. A longer-term growing market for the commodity should bode well for lithium producers in the long run.

Albemarle expects lithium demand to rise significantly in the next few years and is expanding production to take advantage. The company expects to spend around $1.5 billion over the next five years on lithium projects in Nevada, Australia, and China. Its lithium segment earns an EBITDA margin of 34% for the company, which is high compared to some of its other businesses. So, a growing lithium business can boost the company's margins.

What sets Albemarle apart from some of the more-focused lithium producers is the diversity in its operations. Lithium currently accounts for 37% of its revenue and 46% of its adjusted EBITDA. Its bromine specialties business provides products for fire safety solutions as well as other specialty chemicals. These are used in wide-ranging applications including in consumer electronics, textiles, oil field industries, and in products such as electrical connectors, disinfectants, etc. Bromine specialties account for 31% of Albemarle's revenue and 38% of its EBITDA. Finally, the company's catalysts business, which accounts for roughly 26% of its revenue, provides a variety of products used in oil refining. This earns a lower margin and generates just 15% of Albemarle's EBITDA.

Albemarle's operations are also geographically diversified. North America accounts for 26% of its revenue, Asia provides 48%, and the Europe/Middle East/Africa region accounts for 24%.

This diversification provides it with some cushion when lithium prices are unfavorable or one region is experiencing weakness.

Albemarle has a strong track record of revenue growth. Its revenue has grown steadily over more than two and a half decades. 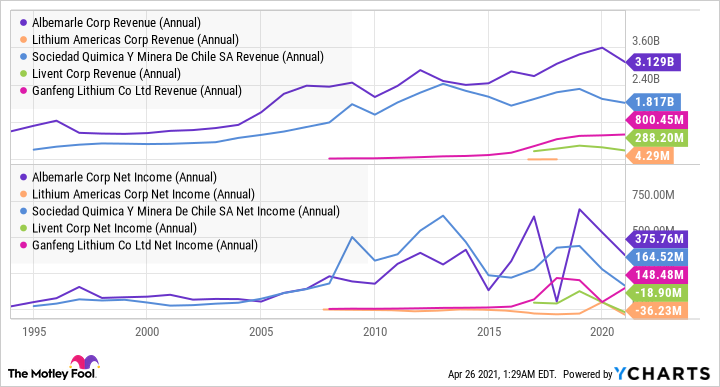 Albemarle also generates loads of cash from its operations. 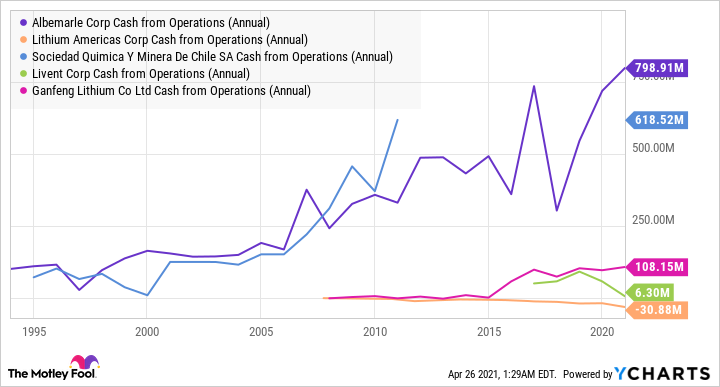 Based on its peer-leading performance, its valuation looks attractive. 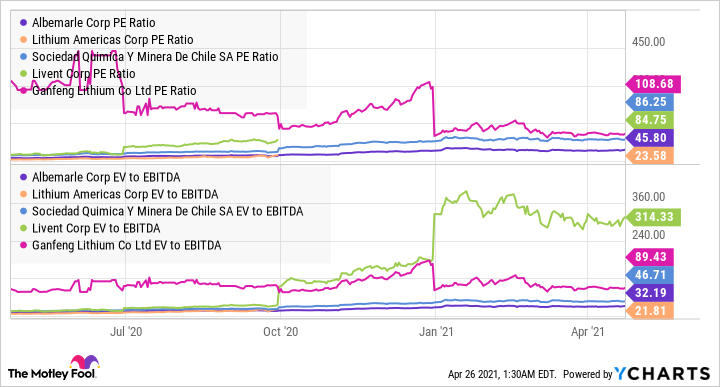 The company's price-to-earnings (P/E) and EV-to-EBITDA (enterprise value to earnings before interest, taxes, depreciation, and amortization) ratios are lower than those of its top peers. Note that Lithium Americas generated losses and negative EBITDA last year, so its P/E and EV-to-EBITDA ratios are not meaningful. 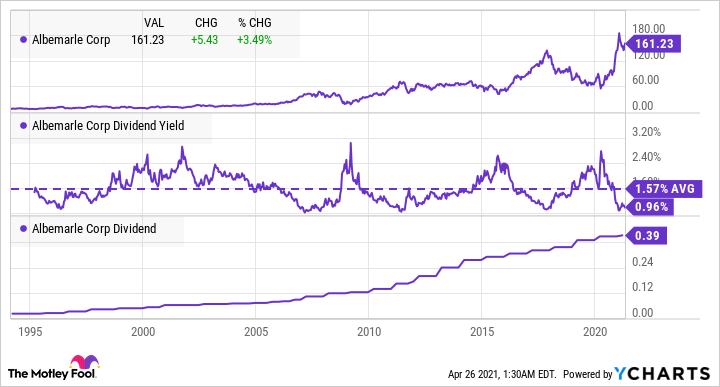 Albemarle also pays a modest dividend that at current share prices yields nearly 1%, and has consistently increased its payouts over the years. The recent rise in the stock price has pushed the yield below its historical average level.

The outlook is bright, but volatile

Though Albemarle's performance looks impressive, it's worth noting that if the company expands its lithium operations -- and its plans on that front are a key reason why the stock price has surged -- its results might change. Specifically, growing its lithium business makes the company more exposed to lithium prices. Another risk factor is its newer strategy of linking its contracts to lithium prices to some extent. Earlier, its contracts were more fixed-price in nature. Management is betting that this shift will allow it to capture more of the upside in lithium prices, which it sees as likely to rise from their 2020 levels.

In the long term, stronger demand should support higher lithium prices, so this looks like a sound strategy. However, it may increase the company's earnings variability a bit. So, if you are willing to accept those oscillations and want to ride the lithium wave, Albemarle looks like a top stock to bet on.