Please ensure Javascript is enabled for purposes of website accessibility
Log In Help Join The Motley Fool
Free Article Join Over 1 Million Premium Members And Get More In-Depth Stock Guidance and Research
By Zhiyuan Sun - Apr 29, 2021 at 5:12AM

Now might be the time to invest in Canada's No. 2 cannabis operator.

Canopy Growth (CGC -3.56%) has been a popular cannabis stock over the past year. Investors have enjoyed a return of 60% over the past twelve months, outpacing the S&P 500 and its gains of 45%. It was a sweeter rise for some than others, however. Many investors who didn't cash out at its peak in February were out of luck; the stock has fallen by nearly 50% since then.

The wind at Canopy Growth's back is a CA$5.8 billion investment for 38% of the company by beverage titan Constellation Brands (STZ 0.54%). But despite the huge influx of capital, the company is taking much longer than expected to turn that into bottom-line profits. Can you count on Canopy Growth to head higher if you buy it today? 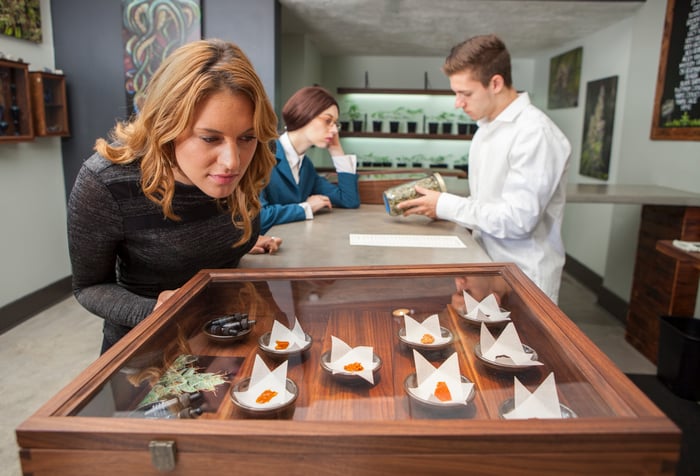 Over the next two years, Canopy Growth projects it can improve its sales by 45% per year. It also anticipates that it can save up to CA$200 million within the next 18 months due to restructuring and cost-cutting efforts.

Although that's very impressive, the outlook has already been baked into its stock price. Canopy Growth shares are trading at over 16 times price-to-sales (P/S) going forward. That's significantly higher than Aphria (APHA), Tilray (TLRY), and Aurora Cannabis (ACB 0.74%), which are trading at 10, 11, and 8 times forward sales, respectively.

Supreme is the firm behind 7ACRES, the most popular premium flower brand in Canada, and generates about CA$13 million per quarter in sales. The two pot growers expect to create CA$30 million in cost savings synergies over the next two years. After the deal closes, Canopy Growth and Supreme will hold a combined 13.6% market share in the Canadian cannabis industry, ranking No. 2 after the soon-to-be-joined Aphria and Tilray.

The company's revenue streams are well diversified. About 14% of its sales come from international medical cannabis in Germany, where it holds No. 2 in market share behind Aphria. 16%, 7%, and 2% of its sales come from Stroz + Vapes, This Works skin solutions, and beverages, respectively. What's more, the company is also seeing rapid growth in its Martha Stewart CBD segment. Four months after its launch, the subsidiary is already outselling 94% of CBD brands in the U.S.

Capital-wise, the company has close to CA$2.5 billion in cash, which is more than enough to offset its CA$600 million in liabilities. It does need some of that cash under an agreement to acquire U.S. cannabis operator Acreage Holdings (ACRGF) once marijuana becomes legal at the federal level.

The biggest problem with Canopy Growth is its lack of exposure to the lucrative U.S. THC market until the Acreage deal closes. In addition, provincial and federal lockdowns in Canada and Germany have returned as the two countries struggle to deal with the third wave of the COVID-19 pandemic. I think Canopy Growth is a great long-term buy due to its size and diversification. However, the pot grower will probably run into problems achieving its short-term financial targets.