Please ensure Javascript is enabled for purposes of website accessibility
Log In Help Join The Motley Fool
Free Article Join Over 1 Million Premium Members And Get More In-Depth Stock Guidance and Research
By Neil Patel - Apr 30, 2021 at 8:33AM

This will satisfy investor and consumer appetites.

Chipotle Mexican Grill (CMG -1.50%) reported first-quarter results on April 21, and it's clear the restaurant chain is getting stronger in what has otherwise been a difficult time for the broader industry over the past year.

The fast-casual pioneer generated sales of $1.7 billion in the quarter, a 23.4% increase year over year. Same-store sales (comps), which is a key metric for any retail operation, soared 17.2%.

These impressive numbers indicate the pandemic-fueled surge is showing no signs of slowing down. There is one very important lever, however, that the company will continue to pull in order to whet investors' (and consumers') appetites in the years ahead, and that's new product introductions. It hints that Chipotle's growth is here to stay. 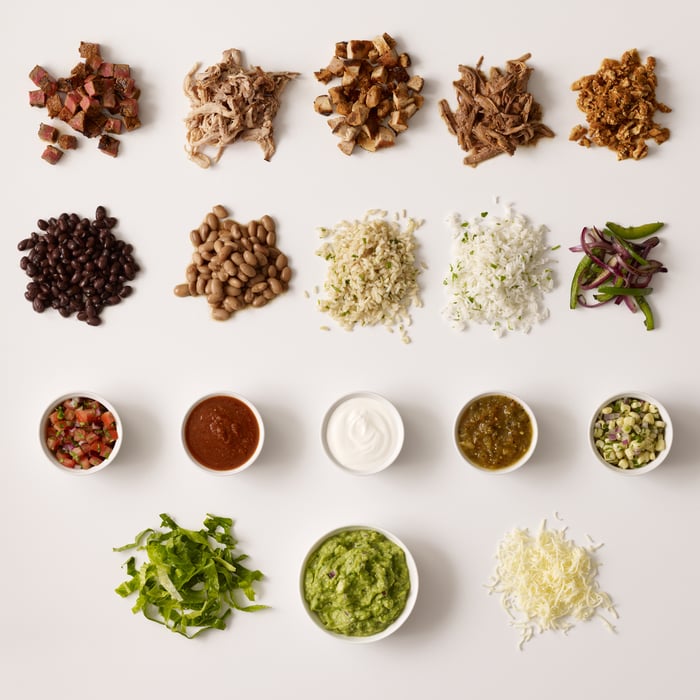 Innovation on the menu

If you're a Chipotle customer, you've probably noticed some recent additions to the menu. In addition to cauliflower rice, which was launched in January, the business started selling quesadillas as a digital-only offering in the U.S. and Canada in March.

The quesadilla was the most requested item, and it's Chipotle's first new customizable entrée in 17 years. In the first quarter, 10% of customers ordered one, highlighting its early success thus far.

This development is noteworthy for three reasons.

First, it demonstrates how Chipotle can lean heavily on its technological prowess to spur interest. The quesadilla can only be ordered ahead of time, incentivizing people to download its app. The company now has 21 million rewards members, which is closing in on the number Starbucks reported in its most recent quarter.

Even more impressive, digital sales more than doubled in the first quarter, leaping 133.9% year over year, and this channel now accounts for half of all Chipotle revenue.

Second, the prevalence of second-make lines in its restaurants allows Chipotle to add items (like the quesadilla) that take longer to prepare without disrupting the speedy flow of the normal, in-person order line. Quesadillas take a few minutes to get that crispy outside, which could slow throughput and upset hungry customers.

"The worst-case scenario is the person in front of you orders a quesadilla," Niccol mentioned in an interview three years ago when discussing potential menu upgrades. Ordering ahead and using the back kitchen to prepare such items solves this problem.

And finally, while Chipotle is not new to product introductions, it's clear just how versatile the ingredients in Tex-Mex food are. There are a number of different items the company could realistically introduce that would be easy to add, such as nachos, tostadas, and even new salsas.

"We have several market tests of new items scheduled later this year that have shown promise in early stage consumer testing," Niccol pointed out during the earnings call.

This forward-thinking culture, focused on product innovation, will keep customers coming back for more. And it will certainly support strong growth in the years ahead.

While Chipotle's management doesn't feel comfortable giving financial guidance for the full year, they're confident the company can grow comps as high as 30% in the second quarter. This is due to an easy comparison in the prior-year period when the coronavirus pandemic dented business abruptly.

Furthermore, 200 new restaurants are expected to open this year, which will get the company to 3,000. The CEO is hopeful Chipotle can one day reach its target of 6,000 total locations, indicating a large growth opportunity ahead.

Regardless of all this positive momentum, Chipotle stock is expensive today -- investors have to pay 61 times this year's estimated earnings. For me, that price is just too steep.