Please ensure Javascript is enabled for purposes of website accessibility
Log In Help Join The Motley Fool
Free Article Join Over 1 Million Premium Members And Get More In-Depth Stock Guidance and Research
By Eric Volkman - May 3, 2021 at 6:09PM

It's making a move in a state that recently legalized recreational weed.

The shares of marijuana company Green Thumb Industries (GTBIF -0.38%) saw an early pop on Monday, on news that the company is buying into the Virginia market. That investor euphoria didn't last, however, and ultimately the stock closed the day 1.1% lower.

Green Thumb has signed a deal to acquire privately held Dharma Pharmaceuticals, one of only four operating dispensaries in the state. Green Thumb didn't disclose the price of the acquisition. 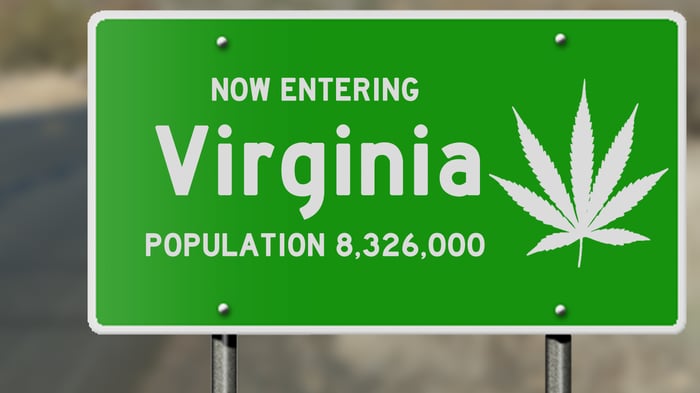 Normally, the purchase of a single dispensary wouldn't get investors excited. What's exceptional about this one is that Virginia just legalized recreational marijuana, following a general trend that has seen other U.S. states flip that switch (New York, New Jersey, Arizona, etc.). So investors were likely reacting to Green Thumb's early-mover purchase.

There's a very big caveat, however -- Virginia's new law won't take effect until 2024. So what Green Thumb is buying will, for the next few years, remain a local operator allowed to sell product only to customers with valid, state-issued medical marijuana cards.

Yet most marijuana stock investors are in this game for the long haul. The recreational legalization wave hasn't crested yet, in my view, and once key Democratic lawmakers get done with their big economic support initiatives, they're sure to push for decriminalization at the federal level. So, assuming it didn't overpay wildly for Dharma, Green Thumb planting its stake in Virginia is a smart move. It's just that it'll take some time to produce meaningful results.