Please ensure Javascript is enabled for purposes of website accessibility
Log In Help Join The Motley Fool
Free Article Join Over 1 Million Premium Members And Get More In-Depth Stock Guidance and Research
By Alex Carchidi - May 4, 2021 at 6:33AM

Bad news can be good news if you're an investor with a long time horizon and guts of steel. Every time a stock takes a body blow from an ugly reveal, there's an opportunity to buy at a discount.

That's the logic that might lead someone to consider picking up a few shares of Emergent BioSolutions (EBS 2.04%) right now. In the course of its work as a contract manufacturer for Johnson & Johnson (JNJ -1.10%), failures at an Emergent facility led to millions of contaminated coronavirus vaccine doses being discarded during a time of desperate need.

Now, the company's competence is in question, and the negative headlines just won't stop coming. Are Emergent's troubles a buying opportunity of a lifetime, or should investors stay far away from the stock? 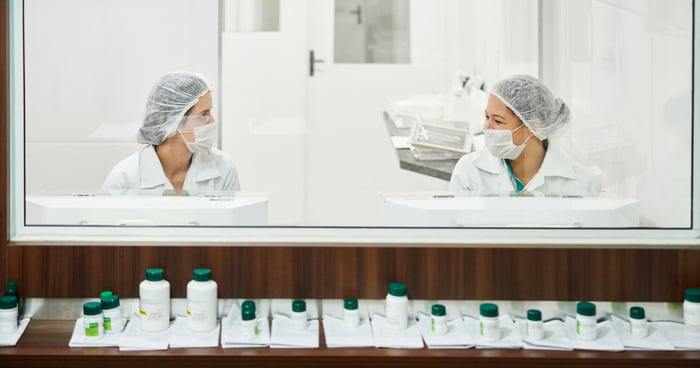 Johnson & Johnson had contracted Emergent to manufacture doses of its coronavirus vaccine, which Emergent was fulfilling at its Baltimore facility. During a routine quality control check conducted by Johnson & Johnson staff, a batch of the vaccine was found to be contaminated. Fifteen million doses were spoiled and needed to be discarded. While that sounds like a lot, it's important to note that Emergent had already produced around 115 million doses without incident.

Nonetheless, after the issue was reported to the U.S. Food and Drug Administration (FDA), a subsequent investigation found a bevy of poor conditions at the facility, ranging from open bags of biohazard waste to mold in sterile areas. Production ground to a halt, and it has yet to resume.

These problems were only the latest of many, however. Going back to October, the company had been forced to discard five batches of AstraZeneca's (AZN 3.08%) vaccine, too. Now, Emergent is facing a slew of class action lawsuits from shareholders, not to mention a collapsing stock price and a major hit to its reputation.

To make matters worse, earlier this week, the company stumbled into even more scrutiny when it was revealed that its CEO sold $11.1 million in stock in the months leading up to the spoiled doses incident. And a congressional investigation into the company's political ties with the Trump administration is now under way.

Why now might be a good time to buy

As of April 21, the FDA maintains that Emergent still hasn't taken action to sufficiently account for its manufacturing problems. In their latest inspection report, regulators identified a slew of loose ends that the company's initial investigation of the spoiled batch failed to address. In addition, regulators criticized the company for its lack of contamination control procedures and the subpar training of employees working at the problematic facility.

Like wealth, reputation takes a long time to build, but it's easy to lose. Emergent's stock is falling more and more as unglamorous details emerge, and it seems like management's preliminary attempts at stemming the losses have failed to even acknowledge the depth of the problems. Eventually, there won't be any bad findings left to report, and the news cycle will move on. At that point, the stock will likely be at its nadir, and it's reasonable to suspect that it will stay near there for some time.

Still, today's dumpster-diving buyers of the stock could easily become the brilliant investing visionaries of tomorrow if Emergent can recover from its tailspin in the coming years. It remains to be seen what kind of negative revenue effects the saga will have, if any. In its latest earnings report from December, the company reported quarterly revenue growth of 61.8% year over year. That means it can lose a handful of revenue-bearing manufacturing contracts and still keep growing at a fair clip, so it could still be a growth stock despite a lot of bad press.

As someone with firsthand experience working in a pharmaceutical manufacturing environment, I couldn't possibly imagine investing in Emergent right now. The issues documented by the FDA's report are so poor that it's actually quite hard to believe the company was ever genuinely up to the task of vaccine manufacturing. Overall, my impression is that management is so disengaged from daily operations that the working culture is severely compromised.

Speculative bargain-hunters could still try to make a buck by buying the stock now, down over 30% year to date, and holding it for a few years. But I get the feeling that decision-makers in the pharmaceutical industry are likely to eschew Emergent for better-run competitors moving forward.