Please ensure Javascript is enabled for purposes of website accessibility
Log In Help Join The Motley Fool
Free Article Join Over 1 Million Premium Members And Get More In-Depth Stock Guidance and Research
By Adam Levine-Weinberg - Updated May 4, 2021 at 4:39PM

The budget airline is starting to unwind some of the costly financing maneuvers it was forced into last year.

U.S. airlines that entered 2020 with strong balance sheets didn't have trouble issuing new debt to supplement the government aid they received during the height of the COVID-19 pandemic. By contrast, those that came into the crisis with greater liabilities and less collateral to borrow against had to pay high interest rates to raise new debt. In many cases, they also had to issue stock at prices well below pre-pandemic levels, diluting their existing shareholders.

Spirit Airlines (SAVE -0.45%) definitely fell into the latter category. Management had to make some hard choices as the pandemic abruptly halted the budget airline's explosive growth. Last week, Spirit completed a series of transactions to blunt the impact of its costly 2020 financing moves. Let's take a look.

Spirit's weak balance sheet comes back to bite it

Spirit Airlines ended 2019 with about $3.6 billion of debt and lease liabilities, equal to nearly four times its earnings before interest, taxes, depreciation, amortization, and rent. Management assumed that Spirit's $1.1 billion of cash and investments provided an adequate buffer in the event of a downturn. Normally, that would have been true -- but it was wholly insufficient for last year's unprecedented air travel downturn.

As a result, Spirit Airlines had to take several painful steps to shore up its balance sheet last year. It issued over 29 million shares of stock, raising $349 million after issuance costs. This diluted shareholders by about 30% at a net price of roughly $12 per share: well below Spirit Airlines stock's pre-pandemic price (and well below where it trades today). 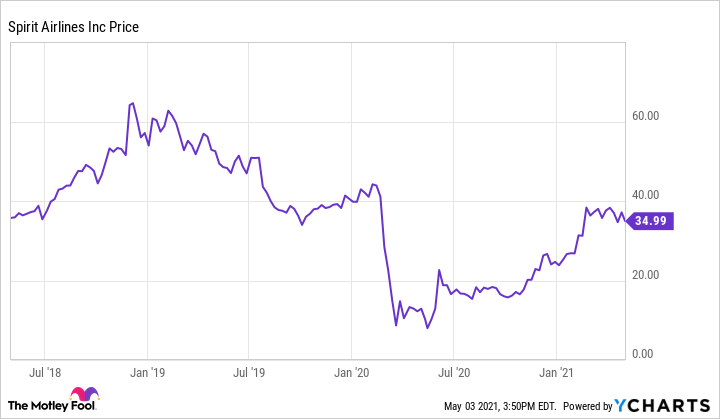 Spirit Airlines also issued over $1 billion of new debt last year. Most notably, it issued $175 million of convertible debt with a 4.75% coupon (and a conversion price of $12.75 per share) and $850 million of secured debt (backed by its loyalty program) at an 8% interest rate. These debt offerings increased Spirit's annual interest expense by $76 million. For reference, its total interest expense in 2019 came to $101 million.

Spirit's secured debt offering gave the company the right to use the proceeds of future equity offerings to repurchase up to 40% of the original principal amount at an 8% premium to par. The company recently found a clever way to capitalize on that option. It sold stock to holders of its convertible notes -- allowing it to repurchase some of its high-cost debt -- while simultaneously buying back most of its convertible debt with the proceeds of a new convertible debt offering on much better terms.

These actions will reduce Spirit's annual interest expense by around $30 million. They will also modestly reduce its future share count, provided the company's share price remains below the $49.07 conversion price over the next five years. And even if the share price does surpass that level, the potential dilution will be very modest compared to what shareholders experienced last year. Following last week's share issuance, Spirit Airlines has about 108.4 million shares outstanding: up 58% compared to the end of 2019. Additionally, the remaining portion of the convertible debt issued last year will eventually convert into 2.2 million shares (unless Spirit is able to repurchase it or settle in cash).

This dilution will make Spirit Airlines shares worth considerably less than would have been the case otherwise. However, it's a sunk cost at this point.

Looking ahead, Spirit Airlines is likely to be a winner in the post-pandemic era. Revenue is already rebounding rapidly. Once the airline can get its fleet utilization back to normal levels, earnings should bounce back, too. That won't take long, as Spirit mainly caters to leisure travelers on routes within the U.S. and to nearby international destinations: a market segment that could fully recover by 2022.

Even at today's share count, Spirit Airlines' 2019 adjusted profit of $349 million would translate to more than $3 per share. That makes the company's current stock price of around $35 seem very reasonable. Meanwhile, Spirit's fleet is on track to reach 221 aircraft by the end of 2023: up from 145 four years earlier. If it can capitalize on that massive organic growth potential while maintaining or expanding its profit margin, Spirit Airlines stock will fly a lot higher.