Please ensure Javascript is enabled for purposes of website accessibility
Log In Help Join The Motley Fool
Free Article Join Over 1 Million Premium Members And Get More In-Depth Stock Guidance and Research
By David Jagielski - May 6, 2021 at 6:18AM

And that's just the start -- these stocks are even better buys for the long term.

With vaccination rates continuing to climb across the country, the end of the pandemic seems to be in sight. And according a recent IPSOS poll, roughly two-thirds of Americans are optimistic that the country is going in the right direction. For investors, now may be a great time to load up on growth stocks that could do well as the economy continues to recover from COVID-19.

Three stocks you will want to put on your radar are Walgreens Boots Alliance (WBA 1.30%), DraftKings (DKNG 11.49%), and Starbucks (SBUX 1.19%). All three of these businesses are coming off strong quarters, and things are going so well that they even upgraded their forecasts for the remainder of the year. 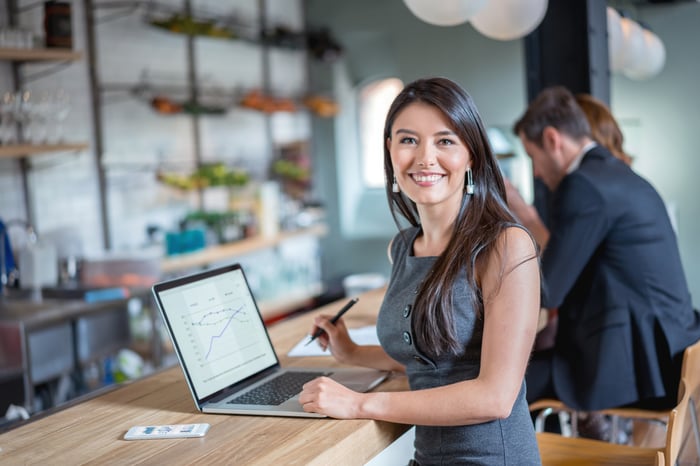 Walgreens released its second-quarter results on March 31 for the period ending Feb. 28. The company delivered better-than-expected results, with sales for the period rising 4.6% year over year to $32.8 billion. And its earnings per share (EPS) from continuing operations rose 8.7% to $1.06. The company is encouraged by its results, and now projects that for fiscal 2021 its constant-currency adjusted EPS will generate growth in the mid-to-high single digits. That is up from the low-single-digit growth it forecasted when it released its first-quarter results back in January.

Although investors may be concerned about Amazon announcing the launch of its own pharmacy in November 2020, Walgreens has been making moves of its own to stay competitive with the online retail giant. In February it announced it would partner with Instacart and offer same-day delivery across the country, potentially eliminating the need for customers to buy from Amazon solely for speed or convenience. It has also expanded its Find Care platform which helps connect people with digital healthcare services. Customers can virtually try on glasses, schedule tests, and book telehealth visits, along with many other services.

Walgreens isn't resting on its laurels, however. It is looking for ways to deliver more comprehensive offerings for its customers, and act as more of a one-stop shop that they trust. And that's why the business still looks to be in great shape. Shares of the healthcare stock are up more than 36% year to date, soundly outperforming the S&P 500, which has risen by just 10%.

DraftKings is a fast-growing gambling stock that has been adapting to a sports betting market that is only getting bigger. More than two dozen states permit some form of sports betting right now, and several more could pass legislation this year.

When it released its fourth-quarter results on Feb. 26, DraftKings said that it offered mobile sports betting in 12 states, reaching one-quarter of the U.S. population.  In Q4, its sales of $322 million for the period ending Dec. 31, 2020 represented an increase of an incredible 146% year-over-year. And while that kind of growth isn't likely going to be sustainable, the company still projects impressive numbers ahead. For fiscal 2021, it now expects to bring in as much as $1 billion -- an 18% upgrade from $850 million, which was the top end of its previous forecast. If it hits those numbers, its revenue growth rate for 2021 will be 63%.

Although DraftKings isn't profitable right now, the growth in the sector is what has investors excited. And investors are often more patient (when it comes to profits) with stocks in such high-growth stages. Shares of DraftKings are up 16% year to date, but over the past year the stock has climbed 167%, compared to S&P 500 gains of 46% over that same period.

Sports leagues have been operating at reduced levels amid the pandemic. As full seasons resume -- with fans -- there will likely be a lot more interaction, and even more demand for sports betting. That, combined with more markets legalizing sports betting, makes DraftKings look like a great long-term investment.

Coffee shop giant Starbucks posted its second-quarter results on April 27, and its numbers were encouraging. Sales for the period ending March 28 totaled $6.7 billion, growing 11% year-over-year. Global comparable store sales rose 15% even though transactions were down, as consumers were spending much more -- the average ticket value was 19% higher than a year ago. Starbucks CEO Kevin Johnson is anticipating strong performance in 2021, banking on what he calls "the inevitable great human reconnection" due to take place as restrictions relating to the pandemic ease and more face-to-face interactions take place.

For fiscal 2021 the company upgraded its guidance for consolidated revenue, and now expects to generate between $28.5 billion and $29.3 billion in sales. It was previously projecting between $28 billion and $29 billion in sales. Both forecasts include a $500 million benefit from having a 53rd week in the current fiscal year. Starbucks also bumped up its expectations for the bottom line, and now sees EPS of up to $2.75, versus an earlier forecast of $2.62.

Those are great numbers to see given that Starbucks is in the midst of a transition in its business. In June 2020, the company announced it would be focusing more on convenience, and adding stores that offer pickup and drive-thru options, while getting rid of others. The news could be great for investors: As the company shifts to a leaner model and away from larger restaurant spaces, that could drive a better bottom line. That's why in Q2 the company had just five net new store openings, as the company shut down hundreds of stores as part of this new strategy.

Starbucks was already looking like a good stock to buy as things get back to normal and people resume normal interactions. But by focusing on a more efficient model that will likely drive profits up, it will become an even better investment over the long haul. The stock is up 6% year to date.