Please ensure Javascript is enabled for purposes of website accessibility
Log In Help Join The Motley Fool
Free Article Join Over 1 Million Premium Members And Get More In-Depth Stock Guidance and Research
By Ryan Downie - Updated May 6, 2021 at 9:08AM

These lesser-known Google facts show how the stock became a tech giant and why it is primed to keep growing in the future.

Everybody knows the name Google. You probably interact with Google products and services every single day. And most people know the company is big. Founded 23 years ago, Google (part of parent company Alphabet (GOOGL 2.39%) (GOOG 2.36%)) has become one of the largest companies in the world. It's also one of the most popular stocks to own.

Despite its notoriety and large size, there are still some under-the-radar bits of information about Alphabet and Google that current and potential investors might find very relevant. Let's look at five things you may not know about Alphabet.

1. Alphabet is a major player in several global markets

Google rose to fame as a search engine, but Alphabet has become a leader in several different business sectors. Google claims 92% global search engine market share, processing more than 3.5 billion queries every day. That astounding traffic was parlayed by Alphabet into leadership of the digital advertising market, of which Alphabet controls 30%. 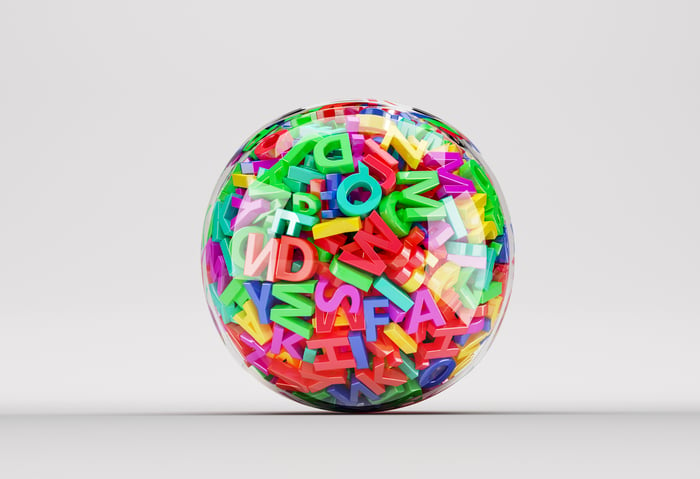 It may come as a surprise to some in the U.S., but Alphabet also dominates mobile device operating systems at a global level. Seventy-three percent of mobile devices around the world run an Android operating system. And though the company lags behind rivals Microsoft and Amazon when it comes to cloud services, Alphabet still commands a respectable 7% share of that emerging growth market.

Alphabet plays a major role in several core tech industries, allowing it to collect an enormous amount of data from individuals and businesses. That's why the company will play an important role in shaping the global economy for years to come.

2. Alphabet spends a ton on R&D

The tech giant's $28 billion research and development budget was one of the world's largest last year. Among the big U.S. tech stocks, it was only surpassed on a dollar basis by Amazon and on a percent-of-sales basis by Facebook. Nearly 20% of Alphabet's expenses were allocated to R&D. This demonstrates a commitment to innovation, which should enthuse investors. This company should continue to improve its existing products and create new ones to spur future growth in competitive markets. 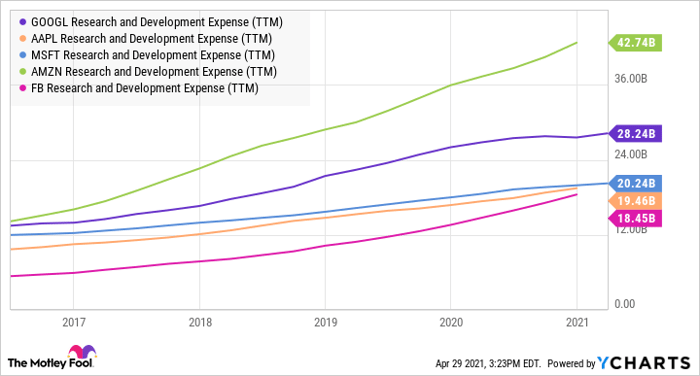 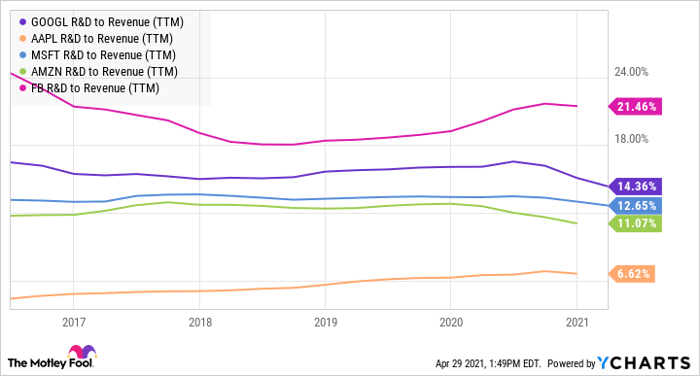 3. Alphabet is an acquisitions engine

Some might be surprised to learn that Alphabet has acquired 161 companies over the past 10 years, which averages out to more than one per month. Annual spending on acquired businesses ranged from $738 million to $2.5 billion over the past three years, so these are clearly an important aspect of its growth strategy. That's not an enormous sum for a company that eclipsed $40 billion in free cash flow last year, but it still echoes the company's commitment to innovation and product portfolio expansion. Alphabet's acquisitions of Motorola Mobility, YouTube, and DoubleClick have been essential to its dominant market positions.

While its juggernaut status can be confirmed in several verticals, 82% of Alphabet's revenue is still attributed to advertising services. That's also the only business segment that is currently profitable. In many ways, the Alphabet universe functions to enable and optimize its core marketing operations, which benefits from data collection and user interactions.

Still, the company is also making bets on the future of AI, data analytics, health tech, and other disruptive forces that will shape daily life and corporate activities following digital transformation. Along with the other technology giants, Alphabet has positioned itself as a premier partner for enterprises to modernize and grow their businesses. That's a strong case for building long-term shareholder value.

5. Alphabet has a following among ESG investors

Environmental, social, and governance (ESG) investing has become a very popular theme. People are embracing the idea that their financial returns should coincide with ethical standards, and many corporations are explicitly building these standards into their operating mission. Alphabet management has said the company aims to be a leader on the ESG front, in stark contrast to fears by some that the company has questionable practices in user data collection and the selective presentation of news or search results.

Alphabet is very focused on the "E" in ESG investing as it works to minimize its environmental impact. Management claims the company has been carbon neutral since 2007 and it aims to be fully carbon-free by 2030. The company has also made efforts to improve transparency about its user data practices, and it has previously weighed in on social issues. Those could be very important factors for investors who are ethically aligned, which could even translate to higher demand for Alphabet shares over the long term.