Please ensure Javascript is enabled for purposes of website accessibility
Log In Help Join The Motley Fool
Free Article Join Over 1 Million Premium Members And Get More In-Depth Stock Guidance and Research
By Jennifer Saibil - Updated May 6, 2021 at 4:31PM

The technical apparel company is making continued progress in its march back toward growth.

Many growth investors have given up on Under Armour (UA 3.08%) (UAA 3.64%) in the past few years and the underperforming athletic wear brand's stock price has been in steady decline. The economic volatility of early 2020 didn't help the situation, but its strong performance since March 2020 has helped the stock price make a bit of a comeback.

That strong performance continued into 2021 with the sports shoe and apparel manufacturer reporting a 35% year over year sales increase in the first quarter. What should investors make of this Q1 earnings beat?

Faltering sales get worse in the pandemic

In its early years, Under Armour was focused on technologically advanced activewear for serious athletes, and its rise was seen as a threat to market leaders like Nike (NKE 0.11%) and adidas (ADDYY 1.43%). But sales started to falter a few years ago due to mismanagement and a highly promotional environment, which diluted its premium branding. 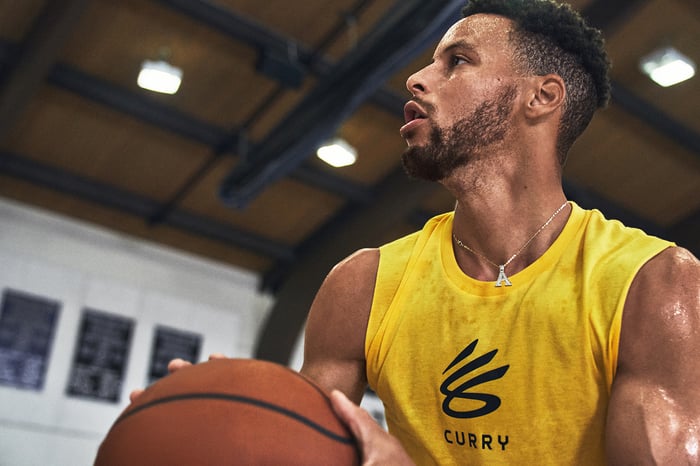 Before the pandemic, sales in the U.S., the company's main market, were a weak spot. Under Armour only managed a 1% sales increase in 2019, with a 2% decrease in the U.S. market dragging it down (including a 6% drop in just the fourth quarter).

The pandemic hampered efforts to turn things around in early 2020. Under Armour bottomed out at a 41% year-over-year sales drop in the second quarter and it ended fiscal 2020 with an overall 15% sales drop.

Under Armour is getting back in the game

Patrik Frisk took the reins as CEO in January 2020 and immediately began implementing cost-cutting initiatives, inventory management upgrades, and a new marketing plan to lift the company back up. These new efforts helped alleviate some of the pressure from the pandemic, and it positioned the company to do well as stores reopened. Those efforts appear to finally be paying off based on 2021's first-quarter earnings.

Total revenue increased 32% year over year on a currency-neutral basis, driven by a 32% increase in U.S. sales. International growth was higher, as usual, with a 58% increase, and wholesale recovered, with a 35% increase. The company also became profitable again, with $78 million in net income, or $0.17 in earnings per share.

As part of the company's restructuring plan set in place last year, Under Armour has already taken a pre-tax charge of $450 million out of the projected $550 million to $600 million. It expects to recognize another $35 million to $40 million in the second quarter, which will still pressure the bottom line.

Under Armour still has more to do

It's important to note that the jump in Q1 sales is more than a pandemic comparison. Only about two weeks of Under Armour's Q1 2020 fell within the pandemic (although it was more part of China's lockdown). Q1 2021 revenue of $1.3 billion is an increase over Q1 2019, and it's even more than revenue in Q1 2018, which previously held the record for Q1 sales. This is good news for the company, which has been struggling for a breakthrough.

"With a solid balance sheet and well-managed inventory," Frisk said, "we're confident in our ability to drive well through 2021 as we get back on offense and make measured progress to returning to sustainable, profitable growth over the long-term."

Under Armour is still projecting a loss for the full fiscal year, but if it maintains its current level of progress, that forecast will probably turn positive by 2022, if not sooner. I still wouldn't call Under Armour stock a buy, but it's definitely one to again put on the watchlist.