Please ensure Javascript is enabled for purposes of website accessibility
Log In Help Join The Motley Fool
Free Article Join Over 1 Million Premium Members And Get More In-Depth Stock Guidance and Research
By Reuben Gregg Brewer - May 6, 2021 at 10:46AM

This stock's story is an example of just how important investor sentiment can be.

Shares of eXp World Holdings (EXPI -6.78%), which offers online professional real estate services, fell 25% or so in April according to data from S&P Global Market Intelligence. However, that decline needs to be put into a broader context, since, at the end of April, the stock was actually off nearly 60% from its February highs.

When eXp World Holdings reported its full-year 2020 earnings in March, they were nothing short of incredible. Revenues were up 84% year over year, adjusted EBITDA increased 357%, and net income went from $9.6 million of red ink to $31 million of black ink. Looking specifically at the fourth quarter, revenues advanced 122%, adjusted EBITDA rose by 175%, and net income rose by 885%. This helps explain why investors had been so upbeat on eXp World Holdings. The stock gained some 670% from May 2020 through April 2021, a period that includes the 60% drop noted above. 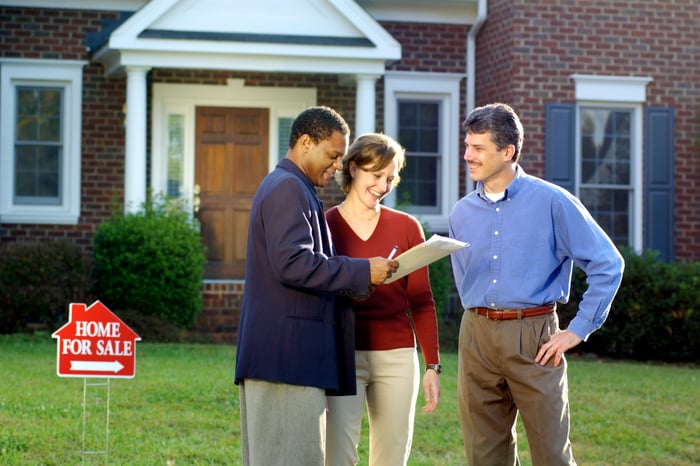 That's important because at one point during that 12-month span, it was up by as much as 1,700%. A lot of optimism was being priced into the stock. While the company lived up to the hype to some degree, it looks like investors have begun to question just how long its growth can remain this torrid. As the saying goes, "Trees don't grow to the sky." Indeed, growth tends to slow as a company gains scale. So, after such a large advance, it isn't too shocking that investors were questioning whether or not eXp World Holdings could live up to the expectations that were built into its stock price. In fact, fourth-quarter earnings fell short of Wall Street's consensus estimate. Such earnings misses normally leave investors with a bad taste in their mouths.

The company reported its first-quarter results in early May. They were good, overall, with revenues up 115% year over year, adjusted EBITDA higher by 159%, and net income rising 3,348%. That said, earnings per share went from breakeven last year to $0.03, which isn't quite as exciting a change. That result didn't make it into the headline bullet points.

Overall, eXp World Holdings is growing fast, but it can only keep up this pace for so long, and its revenue growth hasn't been translated into big earnings numbers. It also missed earnings estimates again, which led to further stock price declines. It probably makes some sense that investors are taking a more cautious approach to this stock after the past year's massive price gains (even taking into account the big drop that has occurred since February). Indeed, it looks like investor sentiment toward eXp World Holdings has turned in a big way.

1 Stock That Could Report Blowout Earnings

Here's Why eXp World Holdings Is Soaring on Wednesday