This company has been growing at triple-digit rates and it could do it again.

The online-based real estate broker eXp World Holdings (EXPI 8.36%) has been firing on all cylinders this year, growing its revenue by over 157% in the first half of 2021, versus the same period last year. The party doesn't seem to have ended, and eXp is looking like it could post another monstrous quarter when it reports third-quarter results tomorrow.

The company has been taking the real estate market by storm recently, growing quarterly revenue from $250 million in Q2 2019 to $1 billion in Q2 2021, helped by its strong agent growth and international expansions -- both of which are facilitated by its virtual presence. With analyst expectations low, eXp has the potential to blow Q3 out of the park if it can execute on these two core metrics. 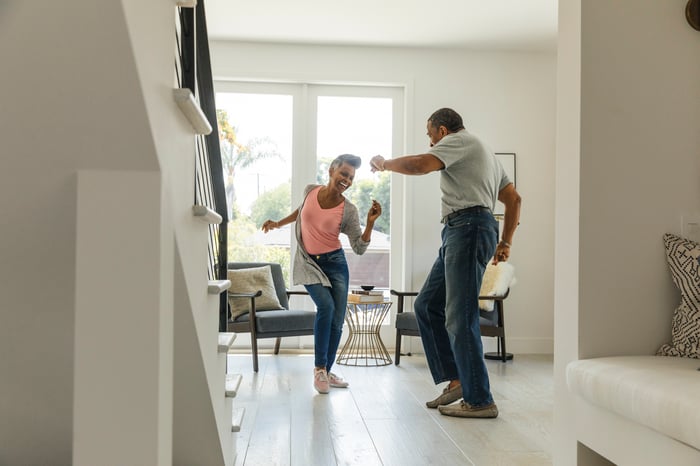 1. Agents are flocking to eXp

Agent growth is something eXp has been very successful at in its past. In Q2 2021, the company reported 87% agent growth to 58,000 agents. This resulted in the volume of transactions closed increasing 164% and revenue increasing 183% -- reaching $1 billion for the quarter. Agents have been flocking to eXp for two reasons. First is eXp's virtual platform. It is easy for a real estate agent from anywhere in the world to get started with eXp because the company does not have offices or official headquarters.

Second, eXp offers some of the best agent incentives in the market. Agents receive more commission from each sale compared to other brokerages like Keller Williams (KW -0.23%), and they receive 100% commission on anything after $80,000 compared to a $140,000 cap for Keller Williams. eXp agents can also receive up to $1,000 in stock after just their first year, along with up to $16,000 if they become a premium -- called an ICON -- agent. After the company established a $0.04 dividend last quarter ($0.16 annualized), the agents now have more incentive to become eXp shareholders -- which potentially decreases agent churn.

The company recently mentioned that it has over 67,000 agents today, which is incredible growth from just last quarter. This shows that the company is attracting agents left and right. If this can continue for many years as the company expands internationally, eXp could become one of the major brokerages across the globe.

2. In the midst of international expansion

eXp is the only major real estate broker to do this because of its virtual presence. After it acquired Virbela -- a fully online world used as eXp's workplace -- in 2018 for $11 million, Virbela has become eXp's headquarters. This means that the business has no in-person offices, so all eXp needs to become operational in a new area is one agent.

With the ability to expand into small or fast-growing companies like Panama or India -- both of which eXp currently operates in -- it allows eXp to become the main brokerage in the area. This would enable eXp to grow in line with the country's real estate market, giving eXp access to growth no other major brokerage would have. While no guidance was given about the international growth prospects for eXp's third quarter, there will likely be substantial growth considering the company announced its expansion into Germany this quarter.

How eXp could stun investors

eXp reported revenue of $1 billion and earnings of $0.24 per share last quarter, yet analysts are expecting revenue to remain flat and earning of $0.11 per share for Q3. eXp does not have a high bar to jump over with these expectations, so if the company continues to execute at the level it has so far this year, eXp could report a huge beat.

If you factor in the potential tailwinds of the hot housing boom over the past few months, it would be hard for eXp not to hit it out of the park this quarter. Despite eXp being in a strong position, it trades at just 3 times sales, much lower than competitors like Zillow (Z 3.50%) (ZG 3.23%) or Redfin (RDFN 7.51%) which trade at 6.5 and 4.5 times sales respectively.

eXp has been the underdog in the real estate market, but its immense growth has allowed it to catch up to competitors and effectively compete. Despite this, analysts have little hope for the company, leaving it severely undervalued. This undervaluation, however, leaves room for investors to reap the benefits of eXp's future success. If the company continues with its winning ways, it could blow out earnings expectations, which is why I will be watching this company very closely this week.

Warren Buffett Loves These 3 Real Estate Sectors: Should You, Too?

Here's Why eXp World Holdings Is Soaring on Wednesday
397%