Please ensure Javascript is enabled for purposes of website accessibility
Log In Help Join The Motley Fool
Free Article Join Over 1 Million Premium Members And Get More In-Depth Stock Guidance and Research
By Howard Smith - May 6, 2021 at 4:38PM

It's been quite an up-and-down year for the stock of electric truck start-up Workhorse Group (WKHS -7.80%). For the month of April, shares dropped 10%, according to data provided by S&P Global Market Intelligence. But that doesn't begin to tell the story for Workhorse stock in 2021.

The real story for shares of the company started in February when the announcement came that the U.S. Postal Service (USPS) was not awarding Workhorse its highly anticipated 10-year contract to replace its mail delivery fleet with new energy vehicles. Workhorse stock tanked 50% on the news. The stock has drifted down further since then, but not without bumps along the way. 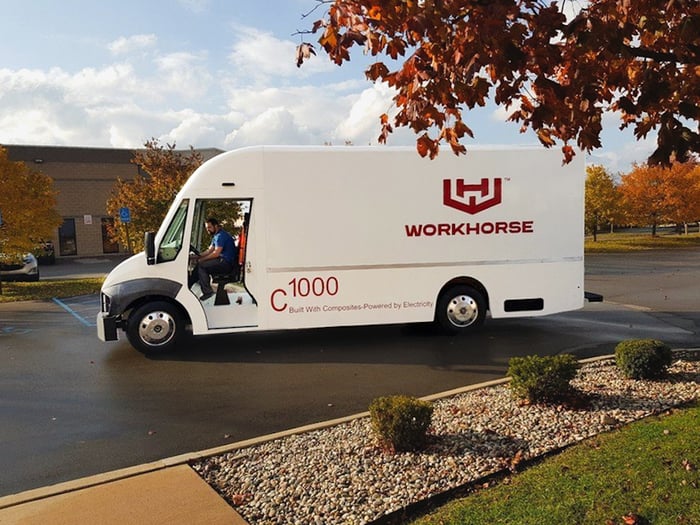 Workhorse hasn't provided investors with any updates on its response to the USPS project since early March. With the company's plans to build only 1,800 vehicles in 2021, clearly investors are valuing it around news on that program. And the valuation prior to the USPS announcement was pretty exceptional. Prior to the big drop, the company's market cap approached $5 billion. That's with 2020 sales of just $1.4 million.

Workhorse pushed back on the contract decision. Some politicians are also asking for an investigation into the process and award, including Ohio Rep. Tim Ryan, who represents the Ohio district containing electric vehicle maker Lordstown Motors (RIDE -9.80%) in which Workhorse owns a 10% stake.

One area of contention is Workhorse claiming the contract winner, Wisconsin truck maker Oshkosh (OSK -0.99%), does not have the capacity to provide all-battery electric vehicles (BEVs) for the contract, and fuel-efficient, low emission fossil fuel-powered vehicles would make up too much of the mix. But Oshkosh squashed that thought in its quarterly financial release on April 28, saying that it offers the "option of delivering any combination, up to 100 percent of either model. Our vehicle design also provides the USPS with the flexibility to convert ICE units to BEV in the future." The contract to build up to 165,000 vehicles is potentially worth billions of dollars.

That statement hasn't helped Workhorse's case. And shares have continued to fall in the first week of May. If all hope of participation in the USPS contract is lost, investors shouldn't expect a reversal in the stock until the valuation gets more in line with the business Workhorse has on the books, and there is more visibility into how sales will grow.