Please ensure Javascript is enabled for purposes of website accessibility
Log In Help Join The Motley Fool
Free Article Join Over 1 Million Premium Members And Get More In-Depth Stock Guidance and Research
By Bram Berkowitz - May 7, 2021 at 9:18AM

The bank's forecast for loan growth is better than a lot of its peers', it should have significant reserves left to release, and deposits can still reprice lower.

The $183 billion asset Citizens Financial Group (CFG 1.35%) based in Rhode Island has been enjoying a nice year thus far in 2021, with its stock currently up roughly 34% year to date. While most of the banking industry has done well, and Citizens will enjoy the same tailwinds as the rest of the sector, the bank has some unique levers that could make it a standout in the industry this year.

A lot of banks are optimistic that loan growth will pick up in the back half of the year after a sluggish start in the first quarter. But at this point, it's really just optimism. Citizens Financial seems to have some real confidence -- and perhaps even tangible proof -- that it will see loan growth in 2021. The bank projected 1% to 2% of loan growth in the second quarter, followed by an acceleration in the back half of the year. This is a pretty strong forecast, considering one of Citizens' peers, PNC Financial Services Group (PNC 1.56%), is guiding for average loan balances to drop 3% to 4% at the bank this year.

Citizens' unique consumer loan portfolio gives the bank an edge with its auto and student lending portfolios, as well as its fast-growing point-of-sale business. Auto lending has been one of the few bright spots for banks thus far, and Citizens grew its auto loan book 1% in the first quarter. Citizens' CFO John Woods said the auto market is on fire and that he thinks the bank can continue to grow the segment with a double-digit return on equity. 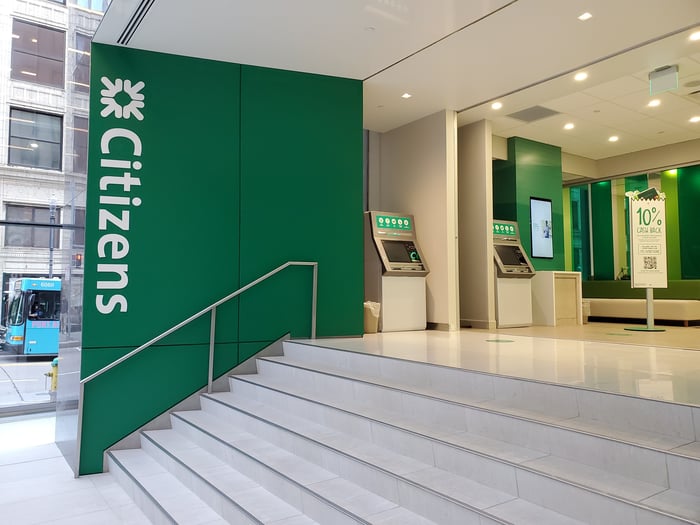 Student lending is also a unique product Citizens offers, and it too has been hot. The student lending book is up 3% from the previous quarter and 17% year over year. Management expects the growth to continue, especially in the bank's in-school business as many students that took the year off due to the pandemic return to college.

Lastly, the bank's growing national point-of-sale lending business, Citizens Pay, continues to show promise. The program essentially extends a digital line of credit that allows consumers to pay for retail products with fixed monthly payments. Citizens partners with merchants such as BJ's Wholesale Club and Apple to customize financing solutions in order to drive more sales. And customers can to use the same lines of credit for repeat purchases so they are not dealing with multiple credit applications or loans. The portfolio has grown 8% year over year, with the point-of-sale industry expected to grow 20% over the next five years.

Citizens Financial released about $140 million in reserves in the first quarter. Banks take reserves to prepare for potential loan losses, but with borrowers buoyed by lots of stimulus from the Federal Reserve, many of the initial losses banks predicted at the onset of the pandemic are not materializing. This has allowed banks to start releasing reserves back into their earnings, which juiced a lot of bank earnings in the first quarter. However, it looks like more reserve releases are coming at Citizens later this year.

Even with the release in the first quarter, Citizens' total allowance for credit losses remains at $2.37 billion, which is enough to cover losses on roughly 2.03% of its total loan book and funding commitments. Prior to the pandemic, Citizens' allowance was equivalent to 1.47% of its loan book, and Woods said the bank could get closer to that level toward the end of the year. It's tough to predict exactly how much Citizens' loan book will grow, but looking at where it is now, if Citizens were to eventually get its allowance down to say, 1.6% of total loans, that would involve releasing close to another $500 million of reserves based on its current loan portfolio.

The low-rate environment has allowed many banks to reprice their deposits down to very low levels. While most banks are now at a floor with how low they can get their deposit costs, Citizens appears to have a little bit of runway left on the repricing front. The bank's total cost of deposits is 0.14%, but the bank's interest-bearing deposits have a cost of 0.20%, and Woods said he thinks the bank can get that down into the low teens by the end of the year.

It may not sound like much, but it adds up when you consider that Citizens has $146 billion in deposits. With deposit costs continuing to decrease, and longer-term rates potentially rising as the year progresses, the bank will see wider profit margins on many of its loans.