Please ensure Javascript is enabled for purposes of website accessibility
Log In Help Join The Motley Fool
Free Article Join Over 1 Million Premium Members And Get More In-Depth Stock Guidance and Research
By Jason Hawthorne - May 7, 2021 at 6:40AM

Long before they won the 2020 Nobel Prize in Chemistry for discovering the molecular gene-editing tool known as clustered regularly interspaced short palindromic repeats (CRISPR)-Cas9, Jennifer Doudna and Emmanuelle Charpentier dreamed of Victoria Gray, a woman with sickle cell disease. Although they didn't know her, they knew that one day, a patient with a genetic disease would be cured using their discovery.

Sickle cell disease was the logical place to start since it's the most common blood disorder with a single-gene mutation. CRISPR Therapeutics (CRSP -4.92%) is one of several companies using gene editing to fight the illness. Their drug CTX001, developed with partner Vertex Pharmaceuticals, is changing the outlook for patients.

Nearly two years after receiving her first treatment, Gray is free of the excruciating episodes and hospital stays that had become the norm in her 35 years. She isn't the only one, and the company is planning to leverage that success to take on a far more prevalent disease. 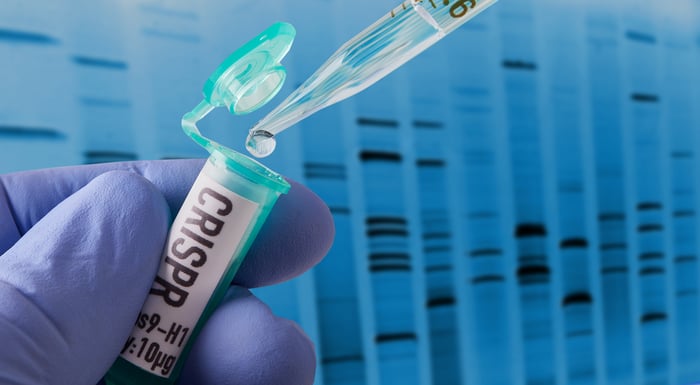 In sickle cell disease, the red blood cells become C-shaped, as well as get hard and sticky. This causes them to clog the blood flow, leading to everything from excruciating pain to infection and stroke.

To combat this, the company uses CRISPR-Cas9 to edit a gene called BCL11A. A few months after birth, that gene triggers the body to stop making a type of blood called fetal hemoglobin and begin making adult hemoglobin. It turns out the fetal hemoglobin is much more effective at carrying oxygen. By turning the gene off, the body goes back to producing high amounts of it. That elevated level prevents the patients red blood cells from sickling.

At the American Society for Hematology (ASH) conference in December, results from the first 10 patients were shared. They ranged between three and 18 months removed from the treatment. All were progressing well. The company plans to treat a total of 45 patients in the study.

CRISPR's next set of programs are cell-therapy products for immuno-oncology. These are cancer treatments that harness the body's immune system. The company is creating its own gene-edited allogeneic, or "off-the-shelf," chimeric antigen receptor (CAR-T) cells.

These cells are engineered to target a specific protein. Traditional CAR-T cells are taken from a patient and modified. Although these have proven useful in a select subset of cancers, issues such as extreme toxicity, complex manufacturing, and low potency have limited their applicability.

CRISPR's approach would improve standardization and availability of the treatment, as well as increasing the range of cancers able to be targeted. That range could include solid tumors, a category that makes up 90% of cancers in adults.

CRISPR's immuno-oncology research is focused on three targets. The first is CD19, a molecule that's targeted in about 50% of all CAR-T programs. The second target is B-cell maturation agent (BCMA) for the treatment of multiple myeloma. The final target is CD70, a more novel approach that should enable applications in both solid tumors and blood cancers. These are in clinical development under the labels CTX110, CTX120, and CTX130, respectively.

Despite its success, CRISPR is still in its early stages and will face plenty of competition. Both Editas Medicine and Intellia Therapeutics are employing CRISPR-Cas9, while Beam Therapeutics is attempting to commercialize a related base editing approach. Meanwhile, more than 100 companies across the globe continue developing CAR-T technologies.

One tailwind is familiarity. The success of COVID-19 vaccines based on messenger RNA has raised the profile of genetic medicine. That already appears to be flowing into research. In their most recent quarterly earnings calls, both Thermo Fisher Scientific and Repligen -- life sciences companies -- called out genetic sciences and gene therapy as areas of particular strength.

CRISPR Therapeutics has a head start in using gene editing to cure disease. That said, Intellia and Beam's approaches could prove easier or more effective. That's why it's a good idea to keep investments in biotechs small and spread across several companies. It's virtually impossible to predict the future, and that's even truer regarding scientific advances.

However, with an apparent cure for sickle cell disease behind it and programs to genetically enhance our immune system to kill cancer, CRISPR Therapeutics is leading the race to become the future of medicine. The stock is nearly 50% off its highs, the biggest discount since the depths of the pandemic. Now may be the perfect time to pick up shares for investors who can stomach the volatility and hold for the long term.