Please ensure Javascript is enabled for purposes of website accessibility
Log In Help Join The Motley Fool
Free Article Join Over 1 Million Premium Members And Get More In-Depth Stock Guidance and Research
By Anthony Di Pizio - May 8, 2021 at 8:01AM

The famed credit card giant has guided for a return to growth in 2022, but there's a chance it might come sooner.

Most companies faced enormous challenges in 2020, and many are still feeling the effects. Few were faced with a level of uncertainty as extreme as American Express (AXP -1.46%), given its sensitivity to consumer habits. Pandemic-driven lockdowns curbed consumer spending, hitting the company in two ways: Fewer credit products were in demand, and the stability of its loan book was of concern, as much of its lending is done on an unsecured basis.

American Express elected to tread water in 2020 and designate 2021 a "transition year," with a return to growth in 2022. However, it seems the rebound has begun in a convincing way. 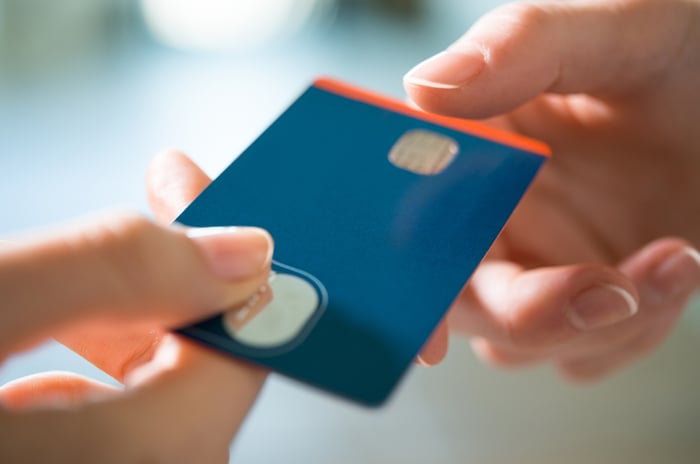 American Express offers a diverse line of consumer and business credit products, including credit and charge cards, personal loans, business loans, and working capital arrangements. The majority of these don't require security, and range in limit from $25,000 on the consumer side to $150,000 for U.S. businesses. The company recently announced its first foray into small-business loans outside the U.S., targeting market share from big banks that are tightening lending restrictions. American Express wants to fill an important gap, providing unsecured credit to businesses that are struggling to access capital.

After posting results for the first quarter of 2021, the company cited 11% growth compared to 2019 in cardmember spending, excluding travel and entertainment -- two areas of the global economy that are still suppressed. The takeaway, though, is that consumers appear to be actively spending money in the places they're able to.

Demand for new cards has rebounded sharply, particularly in Q1, with 2 million new cards issued for the first time since the beginning of the pandemic.

The company also managed costs extremely well, with every category down in Q1 year over year -- to the tune of almost $500 million -- except marketing, which was recently ramped up in anticipation of the economic recovery. In percentage terms, expenses were down the most in cardmember services, which makes sense, as customers are traveling less and calling upon their AMEX card benefits at a reduced rate. As a result, it's unlikely this figure will remain suppressed going forward.

Earnings and the way forward

American Express delivered $6.10 in earnings per share over the past 12 months, so the stock trades at a multiple of almost 26 times -- a little higher than its five-year average around 20. However, earnings estimates are up, especially for 2022, so it wouldn't take much for today's price to look a little less rich.

The company generated $2.74 in earnings per share for the first quarter versus the $1.61 expected, so the 2021 estimate looks on track. However, almost half of the result was attributable to a release of $1.05 billion of credit reserves, as the economy picked up and credit conditions improved. This windfall won't be recurring over the long term, so operating performance will need to be strong for the rest of the year to meet earnings estimates.

The rate that American Express issues cards to customers is returning to normal, and consumer spending is growing versus pre-pandemic levels, so there is a chance the company could do even better than some earnings projections suggest. It's difficult to predict how big travel and entertainment categories will be when the world fully reopens, but American Express is on the front lines to reap the rewards, should they come.

Investors would benefit from watching the progress of the company's global business lending experiment, which could be a huge source of growth. Right now, only 21% of total loans are business-related, so by expanding globally this could increase markedly -- and business loans are typically much larger in size because of their higher limits.