Please ensure Javascript is enabled for purposes of website accessibility
Log In Help Join The Motley Fool
Free Article Join Over 1 Million Premium Members And Get More In-Depth Stock Guidance and Research
By Leo Sun - May 11, 2021 at 7:45AM

The tobacco giant is planning for a future without cigarettes.

Philip Morris International's (PM -0.23%) stock recently hit a three-year high after the company posted strong first-quarter numbers and raised its full-year guidance. However, the stock still trades at just 15 times forward earnings, and it pays a high forward dividend yield of 4.9%. Do those numbers indicate PMI is an undervalued income stock? Let's take a fresh look at the tobacco giant's business to find out.

Expanding overseas and evolving beyond cigarettes

PMI was spun off from Altria (MO 0.04%) in 2008. PMI retained the company's overseas business, while Altria remained in the U.S.

PMI initially expanded its flagship and regional brands across countries with higher smoking rates, lower taxes, and fewer tobacco regulations than the U.S. Altria then streamlined its business to offset the secular decline of the domestic tobacco market and rising litigation costs. 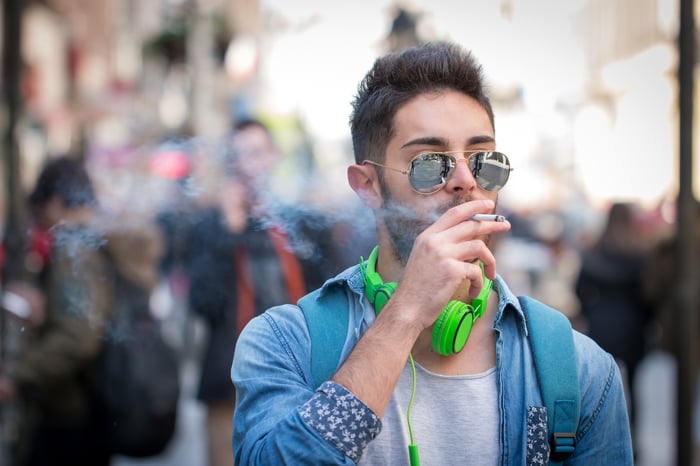 However, PMI still eventually struggled with declining smoking rates, legal challenges, and higher excise taxes in many countries. PMI also suspended its stock buybacks several years ago due to unpredictable exchange rates, while Altria continued buying back shares to boost its earnings per share.

But over the past three years, PMI has easily outperformed Altria in terms of stock price performance and its total return, which factors in reinvested dividends. 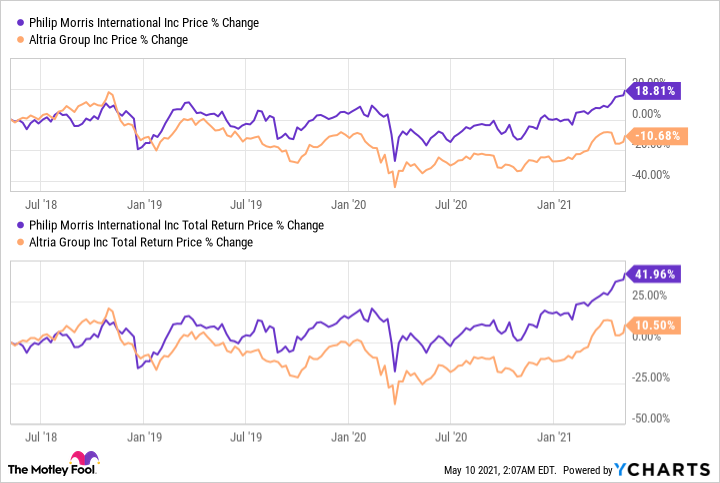 The two stocks diverged because Altria still faced more regulatory hurdles in the U.S. than PMI did overseas. PMI's expansion of its iQOS heated tobacco devices, which heat instead of burn nicotine sticks, also fared better than Altria's haphazard investments in e-cigarettes, cannabis, and nicotine pouches.

How fast is PMI growing?

PMI mainly gauges its growth in organic and like-for-like terms, which exclude currency impacts, excise taxes, divestments, and acquisitions. Its total cigarette and heated tobacco shipments have been declining over the past two years, but the expansion of its heated tobacco business is gradually offsetting the secular softness of its core cigarette business.

PMI generated 28% of its revenue from smoke-free products in the first quarter, and the company believes those devices will eventually replace cigarettes as its core business.

The company plans to halt all cigarette sales in Japan, its top iQOS market, within the next decade, then repeat the process in other markets over the next 10 to 15 years. In the meantime, PMI will likely continue to raise its cigarette prices and cut costs to boost its earnings.

A rosy outlook with resumed buybacks

PMI now expects its organic revenue to rise 5%-7% for the full year, and for its adjusted EPS to increase 11%-13% on an organic basis. Both estimates were higher than the guidance it provided at the end of 2020.

It expects its heated tobacco unit shipments to rise from 76.1 billion in 2020 to 95-100 billion units in 2021. That 25%-31% growth would mark a slowdown from its previous years, but it's a conservative estimate that assumes "no meaningful recovery" in the duty-free channel this year. It also factors in a "limited impact" from the global semiconductor shortage, even though those issues haven't throttled its IQOS shipments yet.

Excluding the U.S., where Altria now sells iQOS products, PMI controlled 7.6% of the global market for heated tobacco products in the first quarter of 2021, up from 5% at the end of 2019. PMI's confident outlook for the rest of the year indicates iQOS' market share could reach double-digit percentages within the next few years.

PMI expects its operating margin to expand again, and it announced it would likely resume its stock buybacks in the second half of the year. It's also raised its dividend every year since its split from Altria, and will likely continue that streak for years to come.

A good (but controversial) value stock

I don't own any tobacco stocks, but PMI is a better overall investment than Altria and British American Tobacco (BTI -0.03%), which are both highly exposed to tightening regulations in the U.S.

PMI's decision to launch iQOS back in 2014, followed by its intentional shift away from traditional cigarettes, indicates it's more forward-thinking than its industry peers. Higher bond yields, which are sparking a rotation from growth to value stocks, could also drive more investors to PMI than Altria or British American Tobacco.

PMI will likely remain a controversial stock, but investors who don't have ethical objections to its core business should consider it a good value right now -- even as its stock price hovers near multi-year highs.