Please ensure Javascript is enabled for purposes of website accessibility
Log In Help Join The Motley Fool
Free Article Join Over 1 Million Premium Members And Get More In-Depth Stock Guidance and Research
By Taylor Carmichael - May 11, 2021 at 6:25AM

Lets take a peek into the portfolios of Cathie Wood and Beth Kindig and see what they're buying.

When I'm researching stocks for my next pick, I often seek inspiration from others. Two of my favorite stock-pickers are Cathie Wood and Beth Kindig. While both are fund managers, they are very generous with their research ideas and share a lot of their thinking for free on the internet.

Wood is the founder and lead investor in a series of managed funds known as ARK Invest. One of her big winners last year was her biotech fund, Genomic Revolution ETF. You could spend weeks investigating all of Wood's research ideas. But one of her stocks that really intrigues me is Butterfly Network (BFLY 28.70%), a company offering a mobile ultrasound device.

Kindig is a former technology consultant who now runs the I/O Fund. She has a deep understanding of technological trends. One of her newest stock ideas is Voyager Digital (VYGV.F -7.57%), a rising upstart in cryptocurrency trading.

Are either of their stock picks right for you? Let's dive in. 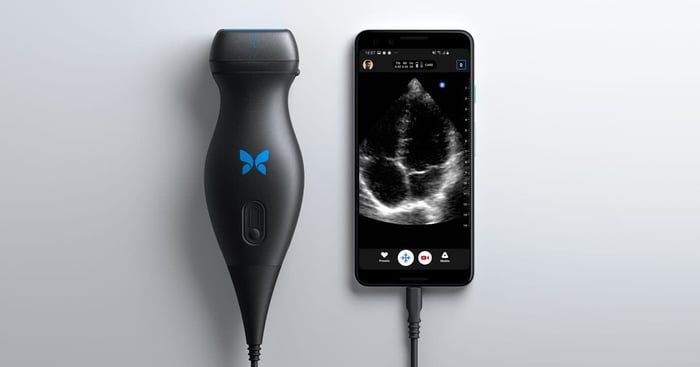 1. Can Butterfly spread ultrasound tech around the world?

Butterfly is a $2.18 billion company that produces handheld ultrasound devices. Anyone can hook up its Butterfly iQ+ device to their iPhone and see inside the human body. The company had $46 million in revenue in 2020, and its quarterly revenue growth was 68% year over year. Right now, ultrasounds are roughly a $7 billion market worldwide, according to Mordor Intelligence.

With its mobile device, Butterfly hopes to dramatically expand the availability of ultrasounds. While ultrasounds can resolve between 70% and 80% of diagnostic issues, as may as two-thirds of the world population does not have access to ultrasound technology. Butterfly's base device costs about $2,000 plus membership costs. That's dramatically cheaper than the traditional ultrasound device, which can run anywhere from $15,000 to $75,000 or more.

The company believes its device can replace the stethoscope at the very basic level of a doctor's tool. Instead of simply listening to a patient's heartbeat or his breathing, a doctor can peek inside the patient's body and see what's going on. The company envisions a future where ultrasounds are used in hospital emergency rooms, ambulances, and on house calls, to diagnose all sorts of medical issues. Butterfly is even marketing its device to veterinarians.

What's particularly exciting is that the device is part of a larger platform, and doctors can subscribe and keep the ultrasound videos of their patients online. This software-as-a-service (SaaS) aspect is wonderful for investors as customers lock in, and Butterly wins recurring revenues streams.

If the company can continue its sales growth, I think it will be a monster stock. But Butterfly is still very early in its story, having just gone public via a SPAC in February. For now, I'm keeping this stock on a watch list, and waiting to see if the company can keep up its rate of growth and cross the chasm from early adapters to more widespread acceptance.

Cryptocurrency stocks have been on fire lately, especially after Square and PayPal made sizable investments in Bitcoin.  Dominant crypto exchange Coinbase (COIN -10.77%) is now a public stock, and it has a massive market cap of $52 billion. While Coinbase has a huge advantage in being top dog and first mover in the crypto markets, Beth Kindig prefers an underdog stock -- the small-cap brokerage, Voyager Digital.

Why does she think this tiny brokerage will upend the massive Coinbase? One main reason is that Voyager offers $0 commission trades. And on top of that, Voyager also has a market-leading 58 cryptocurrencies people can buy. The company even offers up to a 10% interest rate on stable coins (crypto that is tied to a reserve asset). If you want to invest in crypto, Voyager has a strong sales pitch -- this brokerage pays you money, while Coinbase costs you money.

Right now Voyager is in a hyper-growth phase. For most companies, you look at annual sales figures, or quarterly numbers. For Voyager it's a monthly game. At the end of the fourth quarter, Voyager had 43,000 customer accounts, and a tiny $3.6 million in revenue. By January, Voyager had over 100,000 funded accounts, and $8.5 million in revenue for the month. By February, the company had 175,000 customer accounts, and revenue doubled yet again, to $20 million for the month.

Voyager now has $2.4 billion of assets under management (AUM). The company expects to make 10% to 12% annually off its AUM. While crypto is notoriously volatile, I'm convinced these currencies are here to stay. I believe this brokerage is going to continue to take market share from Coinbase and other players, and the opportunity is sizable.

Why Butterfly Network Was Down 15.5% in September