Please ensure Javascript is enabled for purposes of website accessibility
Log In Help Join The Motley Fool
Free Article Join Over 1 Million Premium Members And Get More In-Depth Stock Guidance and Research
By Daniel Foelber and Christy Bieber - Updated May 12, 2021 at 1:03PM

Dividend and value stocks are leading the market to new heights.

On Monday, the Dow Jones Industrial Average (DJIA) hit an intraday high above the 35,000 mark for the first time in history.

America's oldest stock index has produced a total return just shy of 17% for the year, handily outperforming both the S&P 500's 12% gain and the Nasdaq Composite's 4% gain. Here's why the Dow's outperformance is great news for dividend investors and retirees. 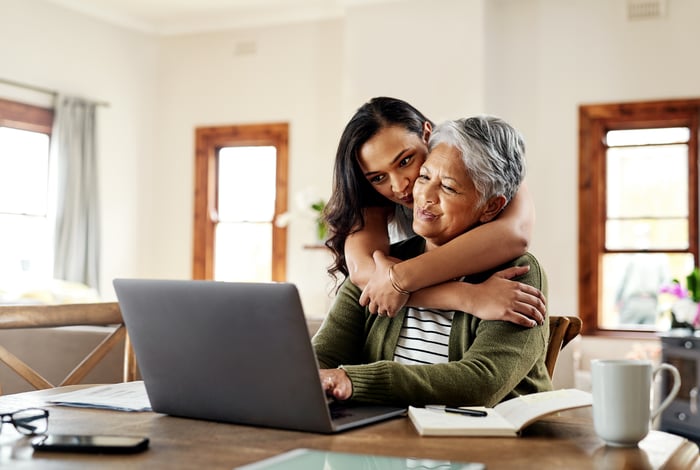 Formed in 1896, the DJIA was originally composed of industrial and materials companies. Today, the Dow is made of a variety of businesses from different sectors. Notable names include mega-cap tech stocks like Apple, Microsoft, and salesforce.com, healthcare giants like Johnson & Johnson, consumer staple kingpins like Procter & Gamble, and of course, industrials like Honeywell International and Caterpillar. Yet despite its newfound diversity, the Dow has lagged the S&P 500 and the Nasdaq. This is partially because the technology sector has been the prime contributor to market gains in recent years. In fact, tech was the No. 1 performing sector in the stock market in 2017, 2019, and 2020. The S&P 500 and the DJIA also lack access to the breakout growth potential of small-cap stocks, whereas the Nasdaq is chock-full of them. 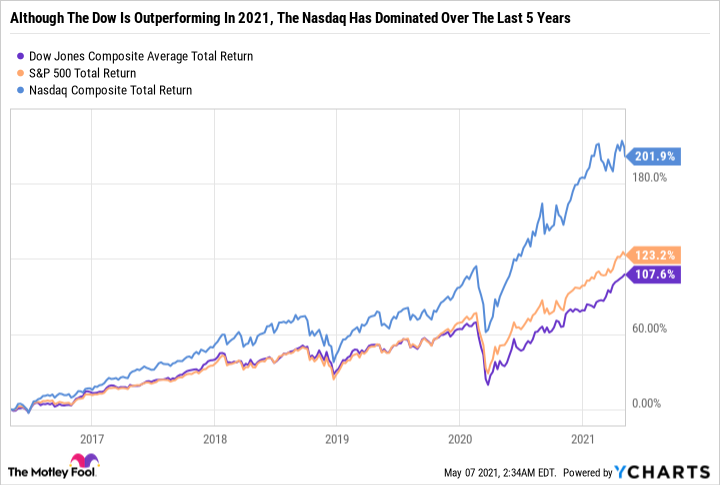 A different kind of rally

But this year is different. After a burst of optimism surrounding growth and stay-at-home stocks, we are now experiencing a sector rotation out of these names and into more traditional value and income stocks. There are plenty of reasons for this, but some of the most important are valuation, cyclicality, and interest rates.

Economic expansions favor cyclical stocks that tend to boom and bust with the broader economy. In the second quarter of 2020, many of these companies posted some of their worst quarterly results in years and took on debt to get through the pandemic. Now, the narrative is flipped. Access to cheap debt (through low interest rates) paired with higher consumer demand for goods and services is leading investors to anticipate a strong earnings season for many of these beaten-down names. That's causing stock prices for companies like Caterpillar to rise before the good earnings have actually happened. Simply put, Wall Street is taking the economic boom for granted and driving up valuations in the process. Meanwhile, many once in favor small-cap tech stocks are plummeting.

The reason the Dow's outperformance is good for retirees has to do with dividends. Although it's unlikely that you own a DJIA index fund or exchange-traded fund, there's a good chance that many retirees own high-yield dividend stocks like Chevron or Coca-Cola -- both DJIA components. Dividend stocks, especially Dividend Aristocrats like Coke and Chevron, provide nearly guaranteed income to retirees no matter what stock prices are doing. Although it's come down because stocks have gone up, the average yield in the DJIA is higher than the S&P 500 and the Nasdaq. 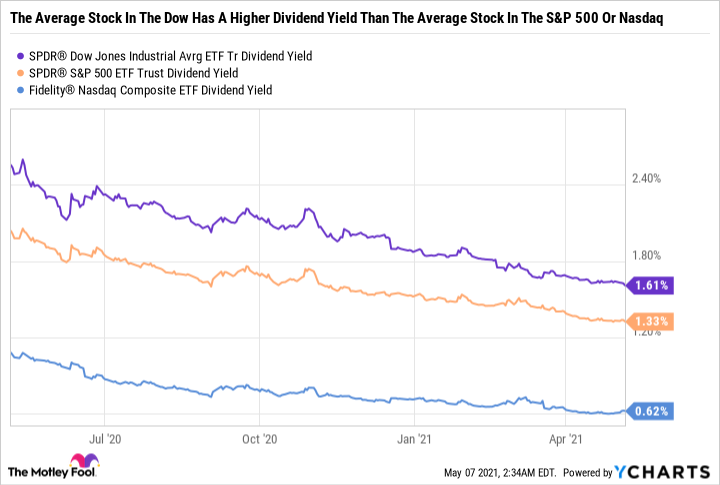 In sum, if the DJIA is outperforming other benchmarks, there's a good chance that income and value stocks are outperforming growth stocks. And considering retirees tend to own traditional titans over speculative SPACs, this is good news.

How should retirees respond to this rally?

For retirees who are seeing their stock portfolio outperform expectations, it may be tempting to change your asset allocation and load up on the stocks that are performing so well for you now.

In most cases, however, responding to a change in market conditions with a major shift in investment dollars isn't a wise choice for seniors. In fact, for investors of any age, it's better to be a proactive investor rather than a reactive one. This means assessing your risk tolerance and investing goals, developing a sound investment strategy, and building a diversified portfolio of investments you plan to hold over the long term.

It's especially important seniors stick to these sound investing principles, rather than letting their decisions be ruled by excitement over a market rally that causes them to experience outsize gains. This means avoiding the temptation to respond to speculative hopes for a market boom by shifting more of your money into the market or changing what you're invested in.

Now, this doesn't mean that it never makes sense to make new investments as a senior. Indeed, you may decide based on a careful assessment of market conditions that it's the right time to buy more shares of a company you believe is poised to outperform expectations.

The key is not to respond to splashy headlines about the Dow's record-breaking gains or other market news, but rather to take a considered, thoughtful approach to your investment choices.

For seniors whose portfolios are currently performing especially well, you'll also need to ensure this financial boon doesn't prompt you to make other decisions you'll regret. Specifically, you don't want to withdraw more than it's safe to from your portfolio because you see the balance growing so much under current market conditions.

Remember, good times may be followed by market downturns and you could just as easily see your investments underperforming next year or beyond. By maintaining a safe withdrawal rate even as your investments do better than expected, you can ensure that your nest egg doesn't run dry while you still need it.