Please ensure Javascript is enabled for purposes of website accessibility
Log In Help Join The Motley Fool
Free Article Join Over 1 Million Premium Members And Get More In-Depth Stock Guidance and Research
By Sushree Mohanty - May 12, 2021 at 6:12AM

This pure-play cannabis company is prepared for another successful year.

The pandemic-induced marijuana boom helped the U.S. cannabis industry sparkle. Florida-based Trulieve Cannabis (TCNNF 0.97%), in particular, impressed investors with its outstanding performance last year. The stock was up a whopping 167%, compared to the industry benchmark Horizons Marijuana Life Sciences ETF's loss of 10%. I am not surprised at this drastic increase. The rate at which the company continued expanding its operations while growing its revenue -- and while showing consistent positive earnings before interest, tax, depreciation, and amortization (EBITDA) -- made its stock soar.

Trulieve's management already has high hopes for 2021. The company will report its first-quarter (ended March 31) results on Thursday. Let's recap its performance last year, look at what's coming this year, and see why it is not too late to include this enticing stock in your portfolio. 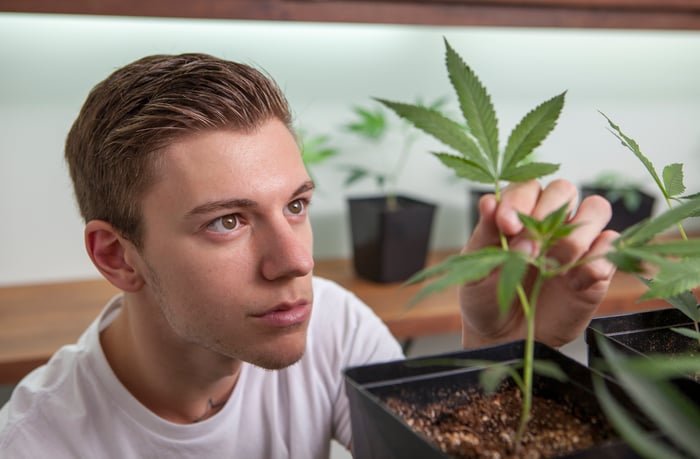 Trulieve had an outstanding 2020

Trulieve Cannabis is a vertically integrated marijuana company, and that allowed it to survive and thrive amid the pandemic while many small companies struggled to keep from going bankrupt. Vertical integration allows a company to control its supply chain, meaning that even amid the crisis of coronavirus, Trulieve saw no disruption in the process from production to sale. The high demand for cannabis was the icing on the cake, and the company produced and sold more in 2020. This is the reason its revenue surged 106% year over year to $521.5 million for the full year 2020.  At the end of 2020, it had a total of 75 dispensaries nationally.

2021 could be even better for this pot stock

Trulieve's management is highly optimistic that 2021 could be another rocking year. They expect the company's sales to grow by about 63% year over year to a range between $815 million and $850 million for 2021. Adjusted EBITDA could come in at around $355 million to $375 million.

Investors used to worry about Trulieve's high dependence on medical cannabis. But I believe it was wise of the company to strengthen its footing in the medical cannabis market in its home state. This dominance in its state market will help it make its mark when Florida legalizes recreational cannabis. Florida's lawmakers filed a bill in January as a step toward legalizing marijuana for adult use.

Trulieve is following the same strategy in West Virginia as it did in its home state. This year, it acquired Mountaineer Holdings and Solevo Wellness West Virginia, which allowed it ownership of nine dispensaries in West Virginia. The state already allows medical marijuana but has seen no developments around recreational use.

Trulieve is also expanding its medical cannabis footprint in Pennsylvania. It acquired three medical dispensaries in the state in April, operating under the name Keystone Shops. Management stated in the Q4 earnings call that investing in the state will be an "essential contributor to our 2021 revenue plan."

Pennsylvania hasn't taken any steps toward recreational pot legalization yet. But neighbors New York and New Jersey have legalized recreational marijuana, which might push lawmakers in the state to do the same. In the meantime, solidifying its position both in West Virginia and Pennsylvania gives Trulieve a competitive advantage over peers when recreational legalization happens and sales begin. As of April, the company now operates 83 stores nationwide -- an addition of eight new stores in just four months.

And there's more good news regarding Trulieve's recent entry into the recreational market: In the third quarter, it launched a few high-margin cannabis derivatives -- including gels, chocolates, cookies, and brownies -- for medical cannabis patients in Florida, so it will be ready with these products when more states legalize recreational pot.

What makes me especially bullish on this pot stock is the mega-merger deal it announced on Monday. The company is acquiring Harvest Health & Recreation in an all-stock deal. This acquisition, valued at $2.1 billion, will make Trulieve the proud owner of a total of 126 dispensaries, operating in 11 states, and owning 3.1 million square feet of cultivation and production facilities. Imagine the powerhouse of a company this pot stock is headed to become in 2021 and beyond.

Higher revenue and lower costs helped the company report consistent positive EBITDA through all quarters of 2020. Positive EBITDA implies the company is good at handling its operating expenses. Meanwhile, net profits are the total earnings of a company after all the deductions. Trulieve has managed to earn profits, which is a rare attribute for marijuana companies. Its adjusted EBITDA grew 99% year over year to $251 million, while it also reported a net profit of $63 million for the full year. It ended the year with a cash balance of $146.7 million and $82 million in debt. Given such consistent profits, I have no doubts the company will manage to clear off its debts.

In its upcoming earnings, investors should watch to see whether profits remained consistent even as costs stayed down and its balance sheet stayed strong. Trulieve looks poised to continue its winning streak in 2021. Its 2020 performance has proved that it has what it takes to be one of the strongest contenders in the marijuana space. Its outstanding revenue growth, expanding national footprint, consistent positive EBITDA, wise growth strategies, and strong balance sheet all give you a strong reason to invest in this cannabis stock right now.