Please ensure Javascript is enabled for purposes of website accessibility
Log In Help Join The Motley Fool
Free Article Join Over 1 Million Premium Members And Get More In-Depth Stock Guidance and Research
By Matthew DiLallo - May 12, 2021 at 3:43PM

Shares of Aemetis (AMTX 1.78%) tumbled more than 21% by 2:30 p.m. EDT on Wednesday. Weighing on the renewable-fuels company was its disappointing first-quarter results.

Aemetis generated $42.8 million of revenue during the first quarter, solely from ethanol sales. While that was up 8.4% year over year, it missed the consensus estimate by $6.3 million. Meanwhile, the company reported a loss of $0.69 per share, which missed analyst expectations by $0.16 per share.

While the company is benefiting from steadily rising ethanol sales volumes and pricing, margins were lower than the prior-year period. On top of that, its sales, general, and administrative expenses increased. 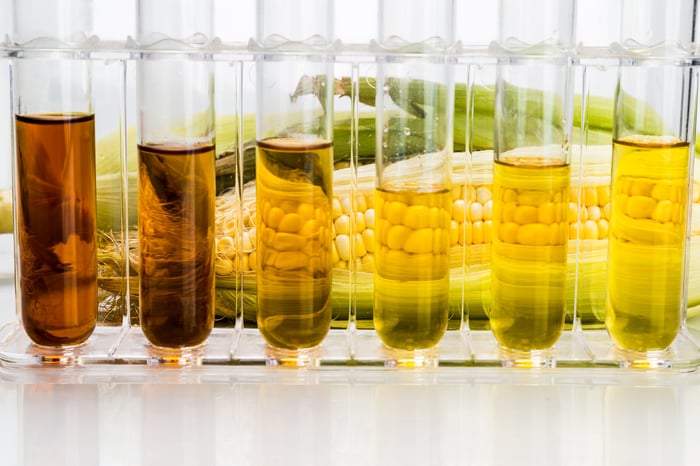 On a more positive note, the company made progress on several strategic initiatives during that quarter. It continues to work toward delivering on its five-year plan of producing carbon-negative products. It recently formed Aemetis Carbon Capture to inject carbon-dioxide emissions into sequestration wells at its two biofuel plants in California. It also won approval for a 32-mile extension of an existing four-mile biogas pipeline as part of its dairy renewable natural gas project in California.

Aemetis is still in the early innings of its five-year plan, which remains on track. The company estimates it can grow revenue at a 35% compound annual rate as it grows its various renewable-fuel businesses over the coming years. That growth potential makes it an interesting stock for those seeking to play the energy transition to lower carbon-alternative fuels.