Please ensure Javascript is enabled for purposes of website accessibility
Log In Help Join The Motley Fool
Free Article Join Over 1 Million Premium Members And Get More In-Depth Stock Guidance and Research
By Jason Hawthorne - Updated May 13, 2021 at 9:39AM

Falling costs are ushering in a new era of screening for a dreaded disease.

Cathie Wood has gained notoriety from making some seemingly outlandish calls on stocks and for being right. Her company's extrapolation of real world data and technological trends has proved to be an incredibly profitable investing strategy, even after some recent turbulence.

One of her less controversial projections is around preventative cancer screening. Specifically, she and her team believe liquid-biopsy screening for cancer could grow to a $150 billion market as the cost of tests drop.

The thinking is that early screening is the best way to save lives, since all solid tumors progress from treatable and local to lethal and metastatic. The falling cost of sequencing the human genome has introduced many new use cases, and the U.S. health system will likely adopt routine screening as costs drop below $1,000. If the projection proves true, three of her portfolio's companies -- Pacific Biosciences (PACB 53.19%), Guardant Health (GH 5.26%), and Exact Sciences (EXAS 0.15%) -- could be big winners. 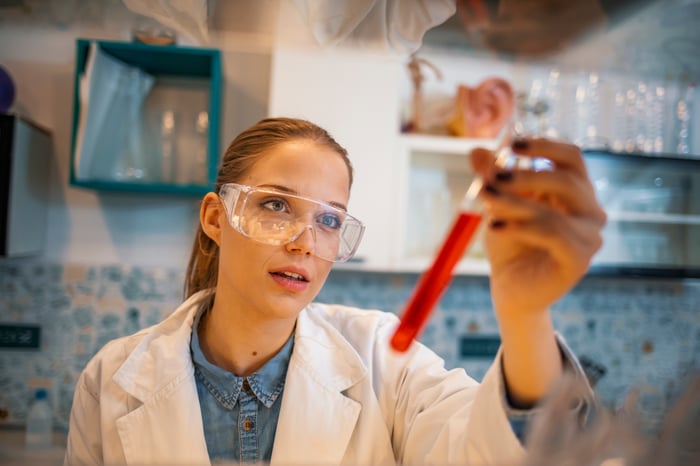 PacBio has long been overshadowed in the genome sequencing market. With a market cap of only $5 billion, the company is dwarfed by Illumina's $55 billion market capitalization.

Historically, Illumina's short read sequencing (SRS) was the standard approach, thanks to its lower cost and higher data reliability. Although long-read sequencing (LRS) could read DNA fragments hundreds of times longer, the lack of accuracy made it difficult to distinguish meaningful genetic variation from sequencing error.

That's changing, thanks to PacBio's HiFi sequencing, which combines the benefits of each approach. Wood's firm, ARK Invest, considers it part of a third generation of sequencing, one that will approach the cost of SRS and unlock the market for cancer screening.

PacBio's Sequel II and IIe systems are on the path to offer the fast, reliable, and cost-effective results Wood envisions. The machines have also expanded the number of uses by increasing the acceptable sample types and reducing DNA input requirements.

PacBio has partnered with another Cathie Wood genetic testing favorite, Invitae (NVTA -47.51%), to develop an ultra-high throughput, whole-genome sequencing platform. The partners hope to open the platform up to many more patients by making it more affordable.

Meanwhile, PacBio just reported its strongest first quarter ever, with revenue of $29 million, 86% higher than the year-ago period. Further, the company has almost doubled its installed base of Sequel II/IIe systems since the end of March 2020.

Although the stock sits more than 50% off its recent high, the numbers show a company whose technology is gaining traction. If Cathie Wood is right, Pacific Biosciences has a lot of growth ahead, and so do shareholders.

Guardant is another Cathie Wood stock that stands to grow into the huge market for preventative cancer screening. The company uses proprietary blood-based tests and advanced analytics to manage cancer across all stages of the disease.

For advanced cancer patients, Guardant tests help oncologists select the appropriate therapy. Cancer survivors are able to undergo continued testing to monitor for recurrence. Finally, the company's tests allow for early cancer screening. Due to the vast volumes, this last category represents the bulk of the financial opportunity.

Although the stock is down 34% from its highs, Guardant's scientific progress continues unabated. In 2020, its 360CDx became the first liquid biopsy for all solid cancers to receive approval from the Food and Drug Administration (FDA). The test will be reimbursed at $5,000 for all Medicare patients.

Finally, the company's Reveal test was launched in February to screen for cancer recurrence in patients who have undergone surgery for colorectal cancer. The test fits into oncologists' existing workflow and offers dramatically improved accuracy.

The progress is helping sales, which continue to be stunted due to COVID-19. While 2020 sales grew 34% compared to the previous year, management expects 26% to 29% growth in 2021. That adds up to $365 million at the midpoint of guidance. It's a far cry from the 137% growth the company put up in 2019, but it's clear Cathie Wood sees the large addressable market and product innovation as proof shareholders will be rewarded over a long enough time horizon.

Exact Sciences is best-known for its Cologuard test for colorectal cancer, but it's gaining a foothold in screening for many other forms of the disease. This broadening of the portfolio was highlighted by Wood's company at an investor day in March. Management has also made recent deals that position it to take advantage as cancer screening goes mainstream.

That same month, Exact obtained the exclusive global license for technology from Translational Genomics Research Institute. That technology, called TARDIS, is highly sensitive to small amounts of tumor in blood. In a published study, it achieved 100-fold improvement in sensitivity for early-stage breast cancer, compared to similar liquid-biopsy tests.

These advances, and the cash generated from the successful Cologuard product, put Exact Sciences in a unique position. It has a strong brand and solid financial footing to launch additional screening products. It generated $136 million in cash flow from operations last year on $1.5 billion in sales. The combination could make it the best bet to revolutionize cancer screening over the coming decade, despite the stock sitting nearly 40% off its recent high.