Please ensure Javascript is enabled for purposes of website accessibility
Log In Help Join The Motley Fool
Free Article Join Over 1 Million Premium Members And Get More In-Depth Stock Guidance and Research
By Jennifer Saibil - May 13, 2021 at 7:40AM

The market's short term mentality is at work again.

Not surprisingly, Etsy was one of the biggest growth stocks, gaining more than 300% in 2020. The stock had been on a similar trajectory this year until the earnings report came out last week. Shares are down nearly 13% since, however the big question is, why did the stock drop?

Business-wise, everything for the first Etsy posted its third consecutive quarter of year-over-year triple-digit sales and gross merchandise sales (GMS) growth, and it's gotten higher each time. 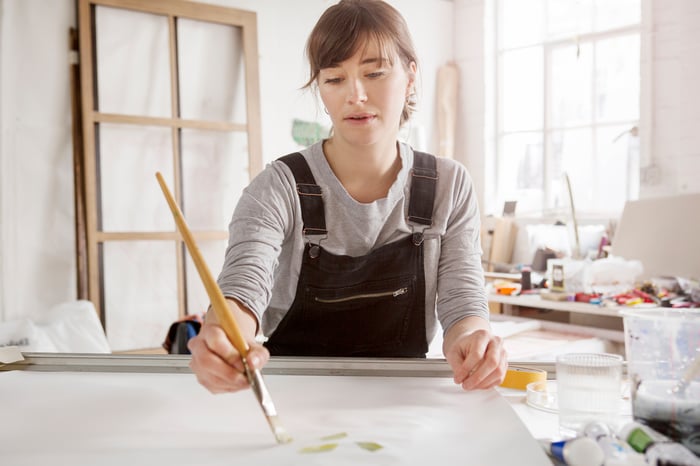 The company released its 2020 sellers census along with the earnings report, which illustrated the effect of the pandemic. 2 million new sellers joined, nearly doubling the total to 4.4 million, and 44% of those who joined did so because of the pandemic. Two-thirds said they maintained or grew sales during the pandemic.

Despite the fantastic results, Etsy stock dropped after the report. That's because CFO Rachel Glaser gave underwhelming guidance for the second quarter.

The company expects 15% to 25% revenue growth over Q2 2020, 5% to 15% GMS growth, and adjusted EBITDA of $129 million to $144 million, which is a decrease year over year. It also expects new customer acquisition to slow down. It faces headwinds from a pickup in non-retail spending, and it won't have the tailwind of stimulus checks, which were a significant factor in the first-quarter sales increase. According to Etsy's estimates, they accounted for 8% of GMS in Q1, and April and May sales already demonstrate the lack of stimulus spending.

Glaser tried to paint a positive picture, noting that the expected increases in sales and GMS keep all of the progress from the pandemic, and that's an important point to keep in mind. But since more than a third of Q2 has already passed, this is more than a prediction, making it likely that the actual numbers will fall in line with expectations.

She also noted that two-year stacked guidance shows a 170% increase in Q2, a slight decrease from 207% in the first quarter. Not too shabby.

Some positive signs for the future

As usual, habitual buyers was the fastest-growing cohort, increasing more than 200% to 8 million. There are shoppers who really love Etsy, and the company is working to convert more shoppers into that cohort. This is especially important as it anticipates new customer count to decelerate.

The company has a strong set of data points that it's using to strategize new ideas, such as improved search results and alerts when a product a customer has looked at goes on sale. It's laser-focused on the user experience, which is the key to unlocking more value from each customer.

CEO Josh Silverman noted that the company has a similar number of unique monthly visitors as online furniture retailer Wayfair, but only a third of the number of eBay, which has a broader product selection, like Etsy. It has work to do, and it's experiencing some growing pains.

But there are still reasons to be optimistic about the future. Despite the slowdown in retail, e-commerce is taking a stronger hold on shopping than was originally anticipated post-pandemic. For example, PayPal Holdings raised its outlook after beating internal guidance for the first quarter.

And Etsy's story hasn't changed. It provides a unique service that reaches millions of customers at all price points, with a lean, platform-based model.

Where does that leave shareholders?

I've been touting Etsy as a top growth stock for the past few months, and I think it still has a lot of future potential. The stock drop was  based on low confidence, not any actual numbers, which is often what drives stock in the short run. But even if growth slows down, there's a lot of opportunity long term. The lower stock price is slightly down year to date, making this a great entry point for investors who have been on the fence.