Please ensure Javascript is enabled for purposes of website accessibility
Log In Help Join The Motley Fool
Free Article Join Over 1 Million Premium Members And Get More In-Depth Stock Guidance and Research
By Royston Yang - Updated May 14, 2021 at 10:08AM

The power of long-term investing can be seen by how much you'd earn if you had invested in the coffee giant's IPO.

The phrase "long-term investing" is often bandied around without investors getting a true sense of what it really means. Those who are new to investing and have not had much time in the market may have a fuzzy notion of how long-term investing can do wonders for growing your wealth.

That's why I use a great example like Starbucks (SBUX 0.62%) to illustrate how long-term investing can make you an astounding amount of money. Of course, the point here is that you need to have the patience and tenacity to hold on to stock in a great company for years or even decades to fully benefit. It's not always easy to do so, as businesses tend to encounter varying economic cycles along the way which can cause an investor's faith to falter.

But if you find a gem of a business like Starbucks and invest early, this is how much money you could make. 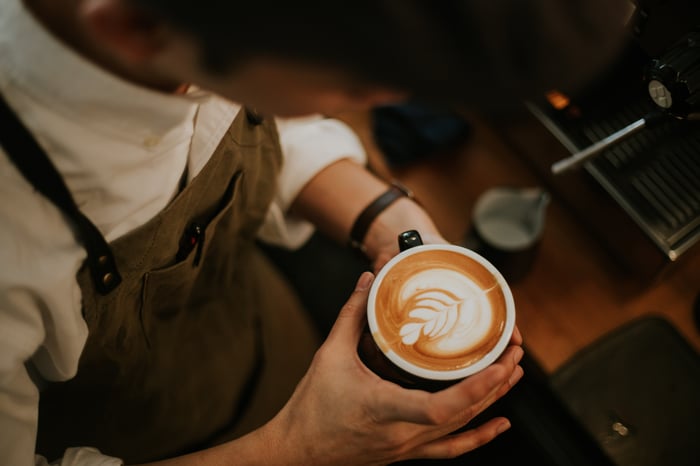 The power of compounding returns

Starbucks went public on June 26, 1992, at a share price of $17. With $10,000, you could have purchased roughly 588 shares of the coffee chain at its IPO. Since that IPO, the company's stock has grown enough that management enacted six 2-for-1 stock splits, multiplying the number of issued shares by a factor of 64. Your initial 588 shares would have grown to become 37,632 shares after the many rounds of splits.

At the recent share price of around $114, this means that the market value of your Starbucks stake would be worth an impressive $4.29 million! In essence, your $10,000 would have grown by a factor of nearly 430 over the last 29 years, a testament to the steady and consistent growth of the company from just a small U.S. chain to an international food and beverage behemoth.

And that total is not even accounting for the quarterly dividends that the company has paid out. Starbucks started paying a quarterly dividend of $0.05 a share in March 2010, and that dividend has grown eight-fold over the last 11 years and now stands at $0.41 a share.

If you're wondering how Starbucks' share price has managed to grow by leaps and bounds, it all started with the company deciding early on that it wanted to build a global brand, along with a determined push for international expansion. Though the company had its roots in the U.S., it recognized that it would soon face a saturated market with little room for further growth.

Starbucks' first non-American store was opened in Tokyo in 1996, and through tweaks and adjustments, the store became a success that could be duplicated in other regions. In 1998, Starbucks opened stores in Taiwan, New Zealand, Thailand, and Malaysia. A year later, it would open its first store in China, which has now grown significantly to form its second-largest market.

By 2000, it entered seven more markets, and in 2001, it added three more countries. By 2019, nearly 23 years after its first international foray, Starbucks had more stores outside the U.S. than within its home country.

Throughout the decades, the coffee giant has demonstrated an ability to weather crises and emerge even stronger. This pandemic has been no exception, as Starbucks managed to pivot to online orders. Its recent fiscal 2021 second-quarter earnings saw global comparable store sales increasing 15% year over year as the U.S. enjoyed full sales recovery after a spate of temporary store closures in the middle of last year. CEO Kevin Johnson highlighted in Starbucks' earnings call that slightly more than a quarter of U.S. company-operated sales came from mobile orders, up from just 16% a year ago.

Starbucks' loyalty program, Starbucks Rewards, has been a resounding success in keeping customers coming back. During the quarter, more than half of U.S. company-operated sales were from members who patronized stores for repeat purchases. The program helps to engender loyalty and keeps customers engaged even as countries implement lockdowns and movement control restrictions. Despite this, Starbucks Rewards membership in the U.S. rose 18% year over year to hit an all-time high of 22.9 million members.

Grand plans for the future

And the company isn't content with just its current crop of 33,000 worldwide stores. During its biennial Investor Day held last year, Johnson mentioned that the coffee addressable market is expected to grow at a compound annual growth rate of 5% to 6% through 2023 to end up with around $450 billion in annual revenue, according to research firm Euromonitor. This steady growth presents enticing opportunities for Starbucks to grow its global presence and penetrate more regions.

The company's "Growth at Scale" strategy seeks to slowly but steadily increase the total number of stores around the world sustainably. Starbucks' target is to reach approximately 55,000 stores across 100 markets by 2030, up from the 80 markets it is in today. With the company firing on all its cylinders, investors can look forward to continued growth ahead.