Please ensure Javascript is enabled for purposes of website accessibility
Log In Help Join The Motley Fool
Free Article Join Over 1 Million Premium Members And Get More In-Depth Stock Guidance and Research
By Alex Carchidi - May 15, 2021 at 6:04AM

Things are changing with this stock, but not for the better.

As the darling of Reddit and Robinhood traders alike, Sundial Growers (SNDL 0.35%) is frequently the butt of investing jokes, and it's no surprise why. The small Canadian cannabis cultivator made a scant $11.7 million in gross cannabis sales last quarter, and its strongly unprofitable operations don't seem to be improving.

Still, the stock's popularity with retail traders led it to grow by roughly 79% over the last 12 months, so it's reasonable to think that there might be something worth investigating further. Is Sundial a diamond in the rough, or another example of a misguided meme stock on the hype train? In my view, it could be both. 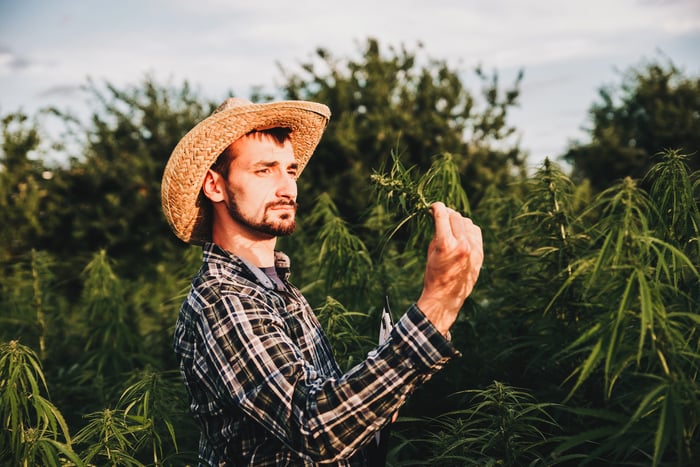 The case in favor of buying soon

There are a few reasons why it might be a good idea to buy Sundial's stock, starting with its latest earnings report from the first quarter of 2021. Last quarter, it reported positive adjusted earnings before interest, taxes, depreciation, and amortization (EBITDA) for the first time ever. While the $3.3 million may not be much, it could be the start of a favorable trend. The same goes for the company's selling, general, and administrative (SG&A) costs, which dropped by 7% compared to the prior quarter.

Acquisitions are also on the horizon. In the third quarter, it plans to purchase Inner Spirit Holdings and the Spiritleaf cannabis network for $131 million in cash and stock. By the end of the summer, the company hopes to have a network of 100 stores distributing its products across all but one of the provinces of Canada, thanks to the purchase. That could easily be a massive catalyst for revenue growth, but the new stores also entail a substantial overhead cost that investors shouldn't discount.

Finally, it's important to recognize that Sundial's cash position of $1.08 billion is outrageously strong, especially considering that it has no outstanding debt. With such a large war chest for the company's size, management has a clear path to continue the massive expansion of the company's retail footprint and cultivation capacity if it chooses to do so. 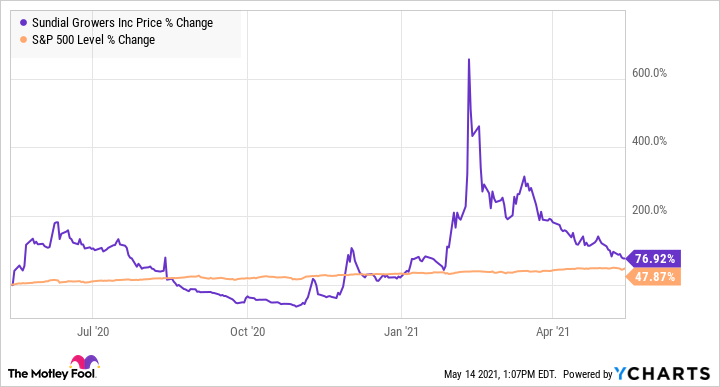 It's preferable to wait for positive trends to strengthen before investing

While it's true that the latest earnings report had a few things for Sundial shareholders to appreciate, it also had a slew of bad news. First and foremost, compared to the prior quarter and compared to the same quarter in 2020, in the first three months of 2021, net cannabis revenue dropped by 29%. That's partially a result of the gross average sales price, which fell by 24% to reach $3.15 per gram. As if that weren't brutal enough, cultivation costs per gram rose by 25% and adjusted gross margin dropped by 39%, taking it to negative 16%.

Its margins may not necessarily improve much without changing its product mix to prioritize goods with higher selling prices, which management has signaled is a work in process. Unlike other companies that focus on high-value-added product segments like concentrates and edibles, 58% of Sundial's revenue comes from dried cannabis flower, where margins are inherently thin.

In closing, it's key to remember that Sundial is still a young and volatile company. At least for the moment, it hasn't shown any clear positive trend of revenue growth or margin growth. Still, its formidable hoard of cash and upcoming retail network acquisition means that investors shouldn't count it out.

If you're willing to make a speculative purchase in which you're comfortable with losing money in the short term, buy Sundial stock this summer. But if you're a bit more cautious as I am, hold off for the moment and keep an eye on the next three or four earnings reports to see if the company establishes a pattern of growth before you make a purchase.