Please ensure Javascript is enabled for purposes of website accessibility
Log In Help Join The Motley Fool
Free Article Join Over 1 Million Premium Members And Get More In-Depth Stock Guidance and Research
By Alex Carchidi – May 15, 2021 at 6:25AM

It isn't easy to stand the test of time.

There isn't much that the best healthcare stocks have in common with firs and pines -- except, of course, being evergreen.

When the seasons change in the market, evergreen healthcare stocks stay as healthy and vibrant as always. While there's no expectation that these stocks will grow like weeds, they're far more hardy, and that makes them excellent investments to anchor your portfolio. Let's take a look at three competitive factors that I've found to be shared by the most consistent and formidable healthcare stocks. 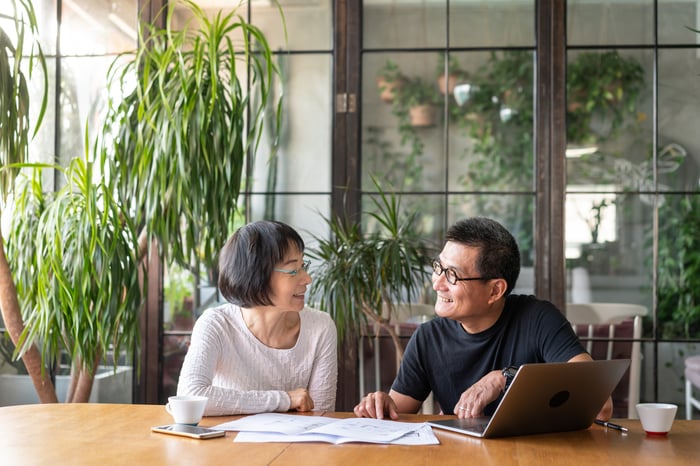 1. Targeting markets that will never disappear

Some healthcare companies make a name for themselves by developing solutions to emergent problems -- like a vaccine or therapeutics to combat the coronavirus pandemic, for instance. As necessary as this type of work might be, the market for coronavirus products isn't going to always be as rapidly growing or as dynamic as it is right now. In fact, the more successful the vaccine manufacturers are at getting their jabs into arms, the faster the market's growth will taper.

In the long run, that's a problem for companies that are still in the process of getting their products through the clinical trials process. By the time their medicines get approved for sale, their addressable market will be smaller than when they started the projects, and it'll also be crowded with competitors.

In contrast, the most enduring healthcare stocks tend to target markets that are relatively timeless. As an example, Abbott Laboratories (ABT 2.85%) makes a plethora of different surgical tools like stents and catheters, all of which are going to be in demand for as long as people need surgeries. It also makes a bunch of different diagnostics that doctors will need to figure out what's going on with patients, which is a permanent feature of their jobs (to say the least).

2. Having a strong competitive moat

Competitive moats are factors that make it harder for a company's competitors to take their market share. So, having more moats and stronger moats results in competitive advantages that drive a stock's growth and viability in the long term. For healthcare companies, moats can be anything from a unique product to intellectual property (IP) protections to high switching costs for customers to defect to a competitor.

Consider Intuitive Surgical (ISRG 3.16%), maker of the da Vinci robotic surgical suite. Intuitive has several different moats, the first of which is that surgeons need to be trained to use the da Vinci system specifically. This means that if hospitals want to switch from Intuitive's product to use another surgical suite, the surgeons will need to be retrained. In other words, there's a substantial time cost associated with switching to a competitor, which makes Intuitive's business more defensible.

Furthermore, Intuitive's robots are covered by intellectual property protection and trade secrets, and its brand is perhaps the most powerful in its market. In sum, its business is well-protected, and it doesn't have any threatening competitors of a similar size. 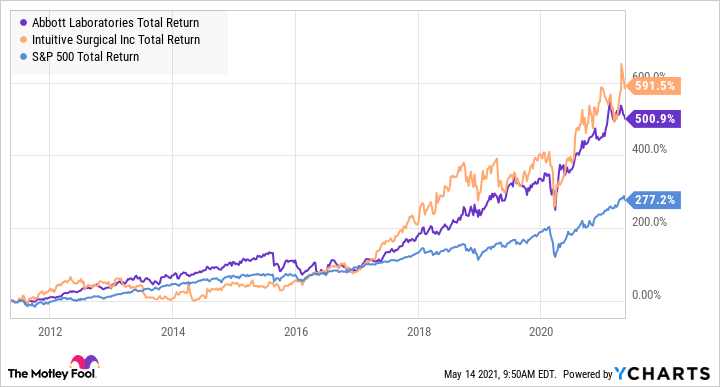 3. Constantly reinvesting in the future of the company

Investors love companies that perform stock buybacks and pay out dividends. But the best healthcare businesses prioritize investing in the company's ability to make more money tomorrow than it makes today. In the long run, reinvestment of earnings makes it easier to reward shareholders too.

Consider Abbott Labs. In 2020, it paid out $2.56 billion in dividends, and spent $173 million on share repurchases. It also spent $2.42 billion on research and development (R&D) in addition to repaying $1.3 billion in long-term debt. Despite spending a significant sum on rewarding its shareholders, Abbott spent even more on investing in future growth opportunities and supporting its future cash flows.

With R&D spending like that, it's no surprise that the company can develop so many new products. More importantly, its commitment to the future is one thing that it has in common with other evergreen healthcare stocks.