Please ensure Javascript is enabled for purposes of website accessibility
Log In Help Join The Motley Fool
Free Article Join Over 1 Million Premium Members And Get More In-Depth Stock Guidance and Research
By Danny Vena - May 19, 2021 at 3:35PM

The plant-based milk unicorn could be the next blockbuster IPO.

Plant-based milk substitutes are all the rage right now and Oatly is leading the charge. The company is a pioneer in the field and the largest seller of oat-based milk in the world. Oatly is also a favorite milk substitute among Starbucks customers, which is at least partially responsible for its popularity.

Oatly has scheduled its initial public offering (IPO) for later this week and will list its American depositary shares (ADS) on the Nasdaq Stock Market using the ticker "OTLY." The stock has been priced in a range of $15 to $17 per share, with each ADS representing one ordinary share. The company will offer 64.89 million shares and raise as much as $1.1 billion from the offering, valuing Oatly at as much as $10 billion. 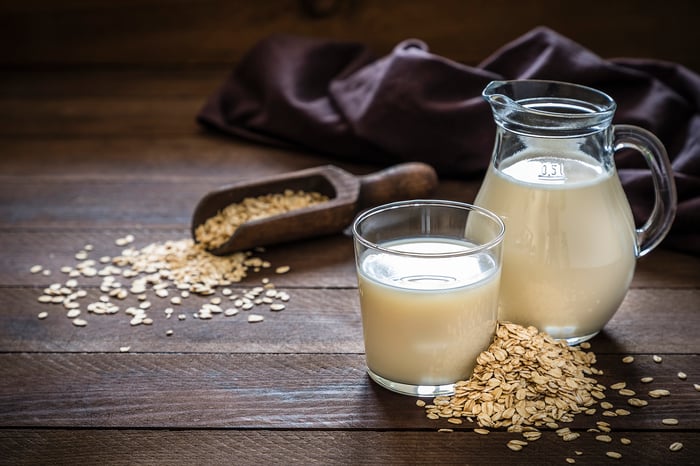 The company was already a big hit in its native Sweden before taking the U.S. market by storm. By joining forces with Starbucks and Dunkin' coffee shops to provide its plant-based milk substitute, Oatly quickly garnered significant name recognition. It offers a wide variety of alternative products for those looking to avoid dairy, including milks, ice creams, yogurts, and spreads.

Oatly has a large and growing customer base, selling in 60,000 retail locations and 32,200 coffee shops across more than 20 countries. The company offers its products at a host of major retailers including Walmart, Target, Amazon's Whole Foods, and Kroger, and continues its aggressive international expansion