Please ensure Javascript is enabled for purposes of website accessibility
Log In Help Join The Motley Fool
Free Article Join Over 1 Million Premium Members And Get More In-Depth Stock Guidance and Research
By Bram Berkowitz - Updated May 21, 2021 at 3:55PM

The digital marketplace bank has a new model and looks very undervalued considering its expected performance -- but it seems to be getting treated as a pure tech stock.

Recent inflation fears have led to a broad sell-off of fast-growing tech stocks and a rotation into more value-oriented stocks or cash. The marketplace bank and online personal lender LendingClub (LC 2.87%) has been grouped into the sell-off, with its stock down nearly 16% this month.

While LendingClub is partially a tech and growth investment, the market is missing a huge side of the story. Here's why. 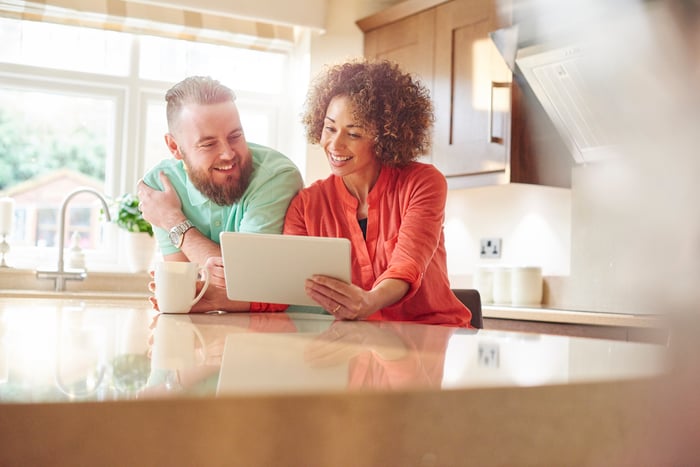 LendingClub is a bank

Earlier this year, LendingClub obtained regulatory approval to acquire the Boston-based digital bank Radius Bank, and the bank charter that came with it, making LendingClub one of the first fintechs to secure a bank charter. This will reduce LendingClub's costs a lot because it can use the cheap deposits brought in from Radius to fund loans instead of higher-cost borrowings.

Additionally, before having the bank charter, LendingClub had to work with third-party banks to help them originate loans, which made the whole supply chain behind originations more complicated and also boosted their costs. These go away with the bank charter.

Banks in general tend to fare better with inflation and rising interest rates. While LendingClub is not a traditional bank, the company now plans to retain as much as a quarter of its loans on its balance sheet. Prior to the bank charter, LendingClub would sell almost all of the loans it originated into the secondary market for a fee. On the balance sheet, these personal loans will generate recurring interest payments and therefore recurring revenue. We saw that strategy begin to unfold in the first quarter:

LendingClub CEO Scott Sanborn said the $344 million of marketplace loans put onto LendingClub's balance sheet in the first quarter are expected to generate $70 million in future revenue. And if you look out even further, you can see why this strategy is compelling. LendingClub has said it plans to retain 15% to 25% of its personal loans on the balance sheet.

If inflation ends up causing the Fed to raise rates, net interest income would benefit and LendingClub would likely be able to charge a higher rate on new loans. LendingClub even says in its recent quarterly filing that if the Fed were to suddenly increase its federal funds rate by 2%, net interest income would grow by 13.3% over the next year, as of March 31, so inflation and higher rates are not as bad for the company as they are for pure tech stocks.

There are many companies now in the digital lending space, but let's compare LendingClub to two popular competitors: Upstart and SoFi, which will soon go public through its merger with the blank-check company Social Capital Hedosophia Holdings V.

LendingClub is currently projected to post a sizable loss this year, but one thing to keep in mind is that most of the company's loss in the first quarter was affected by some one-time, non-recurring costs.

LendingClub's loss of $47 million in the first quarter was mainly attributed to deferred revenue, the transition to new bank accounting requirements associated with holding loans on the balance sheet, and non-recurring acquisition expenses for Radius. There could be some more one-time expenses this year as LendingClub fully completes the transition to its new model, but these are one-time and should be well worth it long term.

Considering most of the loss is not baked into the company's run rate, LendingClub looks pretty cheap trading at a little more than 2 times estimated sales. Now, let's jump ahead and look at estimates for all three companies in 2022.

Things have changed a good deal here. Analysts on average have LendingClub posting a profit in 2022. While Upstart is expected to grow profitability a good deal next year, LendingClub's revenue gets even closer to Upstart's. Based on LendingClub's projected revenue, its forward P/S falls to just 1.63, showing how undervalued it looks right now.

Furthermore, I could certainly see revenue beating expectations. LendingClub beat guidance easily in the first quarter of the year, and consumers are already spending at higher levels than pre-pandemic. Sure, they have some savings built up from stimulus and laying low during the pandemic, but activity could rebound a lot later this year, and LendingClub already has a proven lending machine built into the company -- it did more than $12 billion in originations in 2019.

So why doesn't the market see?

One possible explanation is due to LendingClub's troubled history under previous management. Another reason could be that the digital marketplace bank is a new concept, so investors either don't understand the significance of the bank charter or they really want the company to show them results before giving it another chance.

It's hard to say exactly, but I do believe LendingClub is significantly undervalued and that we will see a rerating if the company hits its projections this year and gets closer to profitability.

CORRECTION: The original version of this article misstated how LendingClub's business practices were allegedly violated under previous management. We're sorry for the error.