Please ensure Javascript is enabled for purposes of website accessibility
Log In Help Join The Motley Fool
Free Article Join Over 1 Million Premium Members And Get More In-Depth Stock Guidance and Research
By Jeff Little - May 20, 2021 at 6:55AM

A little gold panning can go a long way when the elements are favorable.

I was fortunate enough to take a trip to Alaska and experience a gold-panning excursion. There was a lot of dirt and a lot of rinsing and it provided a lot of excitement. That trip also provided me with one investing thought that I keep in mind, especially in times like now when the market is going through down days and a bit of volatility.

The thought wasn't about whether the gold was there. It was more about the process it took to find it, patiently panning and separating out the valuable stuff from other stuff in the water. That's what's happening right now as investors sort out the valuable stocks amid all the options scattered across the stock market riverbed. Sometimes, a dip in value can help reveal the prize.

Let's look at three top stocks that have dipped recently but should still pan out as winners. 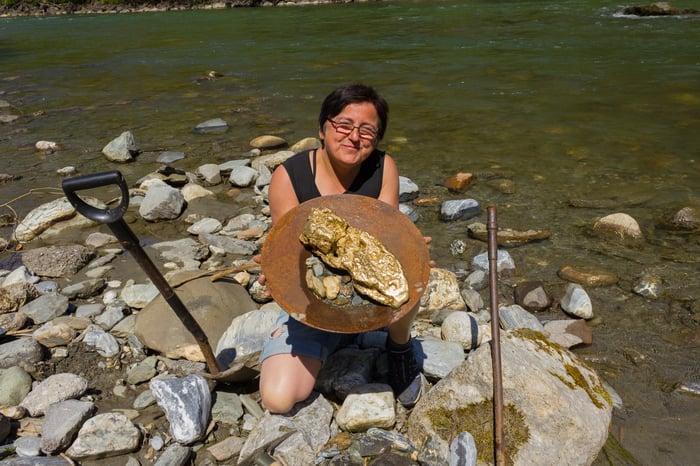 Apple's (AAPL -0.23%) stock was trading around $127 a share two weeks prior to its earnings report release in January before climbing as high as $143 a share by Jan. 26. In the three months since we've seen the following developments:

Currently, the stock is trading around $123. Are we seeing a boredom exodus from Apple stock or just the impact of a confused market? Most likely both factors are at work. The market is down. Technology stocks seem to be taking a hit as a whole. Many investors have made a lot of money off their Apple stock and have maybe been cashing in on some profits. Perhaps investors are wanting something more like a new car or other product?

For me, this spells buying opportunity. There is no news to support any theory that Apple is going away or that the demand for products or services is shrinking. The company is initiating more stock buybacks and analysts have raising price targets to a $158-a-share average. A purchase today would pan out to a 28% gain if that average target is hit. Should it hit the upper target of $185, that's a 50% gain.

Now let's take a look at Walt Disney (DIS -0.11%). Disney parks have been operating at reduced capacity since the fall of 2020 and that has put a strain on the earnings potential for this entertainment giant. But much more recently, Disney parks have been permitted to open more fully and new CDC guidelines have reduced restrictions on mask-wearing around the parks. The parks are getting fully booked weeks, and even months, in advance again. A return of larger crowds at parks is inevitable as capacity restrictions are eased.

Then there's the fact that streaming service Disney+ is crushing it. Don't be fooled by a first-quarter miss on estimates for total Disney+ subscribers, which came in at 103 million (but analysts guessed would be 109 million). The key takeaway here is that when Disney+ launched in November 2019, the company expected to hit 60 million to 80 million subscribers after five years. That number has been crushed by 30%, and three years earlier than anticipated.

Two other Disney details to keep in mind: Disney World celebrates a 50-year anniversary this fall at a time when pent-up demand for travel and vacations is expected to be at a high point, and the movie slate through 2028 calls for 50 new movies (including several potential blockbusters) to be released.

The analyst average share price target over the next 12 months for Disney is $211. The high end of the target, which Disney could push toward, is $230. That's a 25.6% gain if the mid-range target is reached.

Did NVIDIA do something wrong recently? Well, some would say its revenue numbers were a bit flat for data-center sales. But that wouldn't justify such a drop. Oddly, that's really the only bad news for the company recently. NVIDIA reported record fiscal year 2021 fourth-quarter and full-year revenue from the company's gaming and data center platforms, with quarterly company revenue up 61% year over year and full-year revenue up 53%.

NVIDIA has been firing on all cylinders in various markets. Thirty of the 39 analysts covering the company have a "buy" rating. And the average 12-month target price is $630, with a high of $700. That average target represents a $13.5 gain. And if NVIDIA succeeds in its efforts to acquire ARM Holdings -- a chip-design platform -- to pair with NVIDIA's AI, GPUs, and data centers, then hold on tight. That acquisition could generate an additional $3.5 billion in yearly revenue opportunity.

And let's not leave the dividend aspect out. In times of confusing and down markets, it's good to have a stock that pays you cash no matter what the stock price is doing. NVIDIA has been paying dividends quarterly for over eight years running, and the annual dividend was running at $0.64 a share in 2020.

So when the overall market tends to muddy the waters, it takes a bit more panning to find the gold. Companies, like Apple, Disney, and NVIDIA, are likely to see stock prices take a hit. But if investors follow a solid three-to-five-year plan, those companies should shine through in the end, and if a bargain can be grabbed along the way, it could make for a golden opportunity for your portfolio.