Please ensure Javascript is enabled for purposes of website accessibility
Log In Help Join The Motley Fool
Free Article Join Over 1 Million Premium Members And Get More In-Depth Stock Guidance and Research
By Leo Sun - May 21, 2021 at 4:58PM

The Southeast Asian tech giant still has plenty of room to grow.

Sea Limited (SE 0.15%), the Singapore-based tech company that owns the e-commerce platform Shopee and the game publisher Garena, recently posted its first-quarter earnings. Its revenue surged 147% year-over-year to $1.8 billion, beating estimates by $20 million. Its adjusted earnings before interest, taxes, depreciation, and amortization (EBITDA) improved from a loss of $70 million to a profit of $88 million but missed expectations by $85 million.

On a generally accepted accounting principles (GAAP) basis, Sea's net loss widened from $281 million to $422 million, or $0.62 per share, which was seven cents below expectations. Sea's stock rose slightly after that mixed report, but the ongoing tech sell-off has still reduced its value by nearly 20% over the past three months. 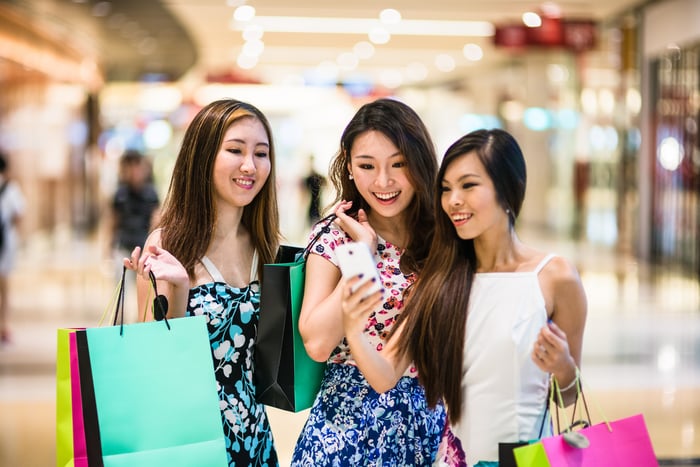 Sea seems out of favor in this market, which favors value over growth stocks amid concerns about rising bond yields, inflation, and unfavorable year-over-year comparisons for high-growth pandemic stocks. Nonetheless, I still bought some more shares of Sea after its latest report for four simple reasons.

During the quarter, Shopee's gross orders rose 153% to 1.1 billion, while its gross merchandise volume (GMV) increased 103% to $12.6 billion. Those numbers put it comfortably ahead of Alibaba's (BABA -0.10%) Lazada as the largest e-commerce company in Southeast Asia and Taiwan.

2. Reduced losses for each Shopee order

The e-commerce segment's adjusted EBITDA loss widened from $264 million to $413 million but most of that loss was caused by the expansion of its marketplace rather than the loss-leading strategies (such as coupons and shipping subsidies) it used in the past to attract new shoppers.

In fact, Shopee only lost $0.38 in adjusted EBITDA per order during the quarter, compared to an average loss of $0.41 in the fourth quarter and a loss of $0.61 a year ago. Shopee won't break even on its orders anytime soon, but those narrowing losses suggest it has a path toward profitability after it cools off its investments and reduces its stock-based compensation.

Sea's digital entertainment unit, Garena, generates most of its revenue from Free Fire, a self-published battle royale game it launched in late 2017.

In the first quarter, its digital entertainment revenue surged 111% year over year to $781 million as its bookings rose 117% to $1.1 billion. Its number of quarterly paying users also increased 124% to 79.8 million, or 12.3% of its quarterly active users, compared to just 8.9% a year earlier.

The bears believe Free Fire will fizzle out and cause Sea's adjusted EBITDA to bleed red ink again. But its rising percentage of paid users indicates it's still gaining momentum, and Garena is already testing out an enhanced successor, Free Fire MAX, to prolong the game's life cycle as it develops new titles.

4. The stock is reasonably valued

Sea didn't offer any guidance, but analysts expect its revenue to rise 89% this year and another 40% next year. They also expect its non-GAAP losses to narrow slightly, but it won't turn profitable anytime soon.

Based on those estimates, Sea's stock trades at 14 times this year's sales and ten times next year's sales. Those price-to-sales ratios aren't cheap, but they're reasonable in a market filled with tech stocks trading at much higher valuations while generating slower growth.

Furthermore, those estimates could still be too conservative since a new wave of COVID-19 infections recently erupted across Southeast Asia and Taiwan. If these countries implement new lockdown measures, Sea's online shopping and mobile-gaming revenue could spike again and easily surpass analysts' average expectations, which would likely bake in slower growth in a post-pandemic world.

But Sea isn't a stock for conservative investors

Sea's e-commerce and gaming businesses have tremendous growth potential, but its entire business still relies on a single hit game to stay profitable on an adjusted EBITDA basis. It will also likely continue to prioritize investments over GAAP profits for the foreseeable future, and its stock could remain out of favor as investors rotate toward more conservative investments.

Therefore, Sea isn't a stock for queasy investors. But if you're looking for a potential multibagger that gives you a lot of exposure to Southeast Asia's booming tech sector, you should consider picking up some shares and ignoring the short-term volatility.