Please ensure Javascript is enabled for purposes of website accessibility
Log In Help Join The Motley Fool
Free Article Join Over 1 Million Premium Members And Get More In-Depth Stock Guidance and Research
By Jeremy Bowman - May 21, 2021 at 6:45AM

Plenty of investors believe there's a cryptocurrency bubble, but it's complicated.

Like beauty, cryptocurrency seems to be in the eye of beholder. Plenty of investors insist that digital coins are a bubble, but there are also millions of true believers in the new asset class who are "HODLing," or holding on for dear life.

Cryptocurrencies have surged since late last year amid widening institutional purchasing and increasing interest among retail investors, who have been stuck at home during the pandemic and looking to put their stimulus checks to good use. In many ways, the rallies of Bitcoin (BTC -0.88%), Ethereum (ETH -3.08%), and Dogecoin (DOGE 7.00%) resemble a bubble, as the assets have moved higher primarily on speculative fervor from investors who believe the coins will keep increasing in value. Essentially, many investors have been buying based on the greater fool theory -- meaning the hope that another investor will come along and pay more.

Crypto bears got some more evidence in their favor when the asset class lost nearly $1 trillion in a week after Tesla CEO Elon Musk said his company would stop accepting bitcoin, China said again that it would crack down on crypto, and stablecoin Tether, which claims to tie its value to the dollar, was found to be holding many fewer dollars than it had claimed.

On Wednesday, bitcoin, the largest cryptocurrency , fell as much as 30%, dropping to $30,000, but then jumped by 25%, showing how volatile cryptocurrency can be. Ethereum and Dogecoin made similar moves. Before discussing whether or not cryptocurrency is a bubble, let's review what the term means. 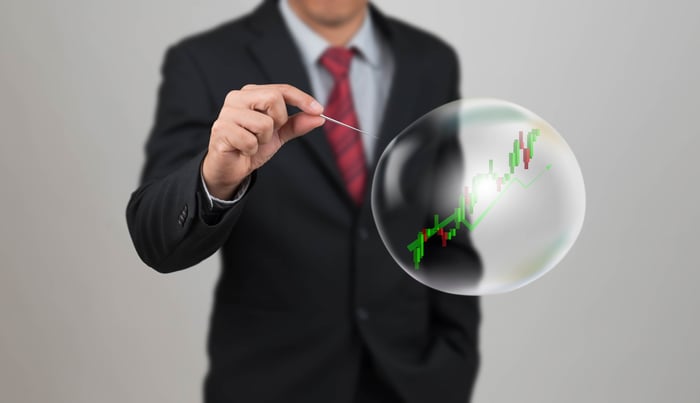 What makes an asset bubble

An asset bubble generally occurs when the price of an asset rises rapidly in a short period of time without a corresponding increase in the value of the asset.

Bubbles tend to have two major factors driving them: speculative interest, which is common with new technologies and products, and easy credit.

Two of the most famous bubbles in recent history were the housing bubble in the late 2000s and the dot-com bubble in the late 1990s and early 2000s. Both were classic bubbles in that they featured a surge in prices that was divorced from the underlying value of the assets in question. In the dot-com bubble, investors were falling over themselves to invest in internet stocks, a new sector at the time. The speculative fervor was so strong that venture capitalists and other investors were willing to fund almost any start-up, focusing on metrics like traffic and impressions rather than the companies' abilities to turn profits. When it became clear that most of these companies would never make a profit, interest dried up among both professional and retail investors, and tech stocks crashed.

The story of the housing bubble was similar. Easy credit in the form of subprime mortgages allowed uncreditworthy Americans to buy new homes, which led to rampant speculation, home flipping, and a boom in home construction under the belief that housing prices would never fall. When those mortgages started to go into default, the housing market went belly-up, and prices declined for several years.

Is cryptocurrency a bubble?

Bubbles are always obvious in hindsight. At the time they're happening, though, things aren't as clear. If they were, the prices in question probably wouldn't be so high.

The rally in cryptocurrency resembles a classic bubble in a number of ways, notably the speculative interest in digital coins and related assets like non-fungible tokens, as well as the cult-like embrace of bitcoin and other cryptos by many across social media. Like the dot-com bubble and more recent stock market bubbles such as 3D-printing stocks and cannabis, cryptocurrency is a new technology and a new product. And as far as the bubble being fueled by credit goes, while some investors are buying cryptocurrency on margin, easy credit doesn't seem to be a major reason for the surge in digital coins.

But because cryptocurrency is a currency, it lacks the fundamentals of productive assets that make it easier to determine whether a stock or real estate asset is a bubble. Like paper money, a currency has value because a group of people agree that it does, and though the primary purpose of cryptocurrency does seem to be speculative at the moment, it can be used to buy and sell things, though generally inefficiently. However, its utility should increase as the technology improves and it becomes more acceptable.

Perhaps the best analog for cryptocurrency is gold, which traditionally backed fiat currency, and has been used as a store of value for millennia. In fact, bitcoin backers often insist that crypto is a form of digital gold, because the number of bitcoins that will ever be created is capped at 21 million.

Though gold has some practical value as jewelry and in industrial uses, the biggest holders of gold are central banks, which consider it a form of currency. In other words, gold only has value because we accept that it does -- since gold is not a productive asset, there's no easy way to value it. Economist Tim Harford told NPR years ago that gold is in a "4,000-year-old bubble."

The situation for crypto seems to be similar, and that explains why there is so much zealousness from bitcoin backers and other crypto bulls. If they can convince a critical mass of people that crypto is a valid form of currency, then it is, and they will be rewarded with a huge payoff. 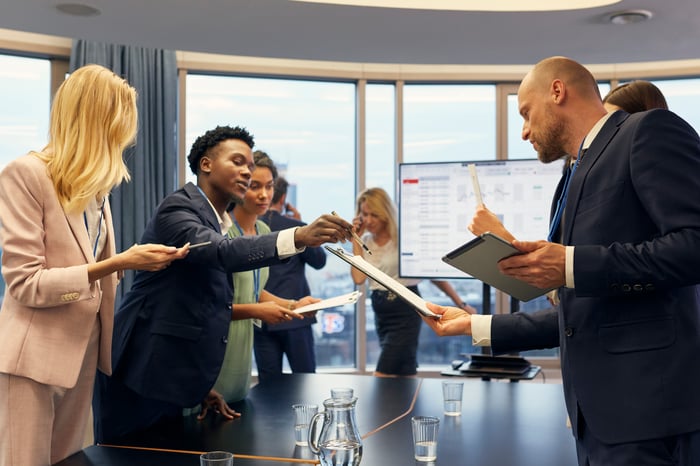 Where crypto goes from here

The bubble in cryptos like bitcoin, Ethereum, and Dogecoin has already been tested several times, and every time the coins fall sharply, bulls rush in to "buy the dip," supporting a rebound in the price. The volatility that has come to characterize the crypto market will almost certainly remain. Lacking fundamentals, the assets tend to trade on emotions, technicals, and statements from business leaders like Elon Musk.

One key test for crypto will come later this year when economies around the world reopen from the pandemic. Interest in investing surged during the crisis as it became a convenient hobby for those forced to stay at home. But the reopening will give an opportunity to those who made big gains in crypto to cash in and spend their winnings the way they would have before the pandemic.

If cryptos like bitcoin, Ethereum, and Dogecoin can hold their current levels through the end of the year, the charge that cryptocurrency is a bubble may start to ring hollow.