Please ensure Javascript is enabled for purposes of website accessibility
Log In Help Join The Motley Fool
Free Article Join Over 1 Million Premium Members And Get More In-Depth Stock Guidance and Research
By Eric Volkman - May 21, 2021 at 7:13PM

Just like its upcoming test flight this weekend, Virgin Galactic Holdings (SPCE -1.48%) stock is positioned for a powerful liftoff. One analyst tracking the stock, UBS' (UBS 0.30%) Myles Walton, upgraded his recommendation on the stock Friday to buy from neutral. That was despite the prognosticator's price target cut; to him, it's now worth $36 per share, instead of $40.

Even with that chop, Virgin Galactic still has significant upside. Walton's new level implies a gain of almost 71% on the most recent closing stock price.

Investors are bullish on Virgin Galactic just now mainly because of that test flight, the scheduling of which was confirmed by the company Thursday. 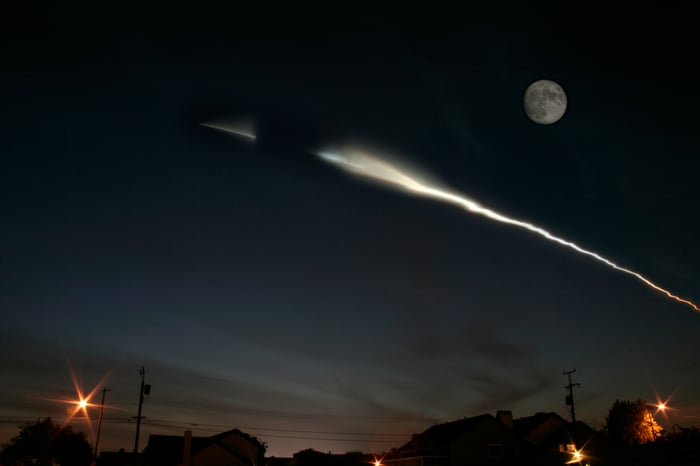 Walton is encouraged by this and finds another key reason to be positive on Virgin Galactic. "We think the faster pace of the Blue Origin offering commercial service merits watching, but we're also encouraged by the care being taken on pricing and price discovery in the near-term (as illustrated by the [roughly] $3 [million] current bid price for the first Blue Origin seat with 3 weeks left of bidding)."

Blue Origin is the commercial space tourism company launched by Amazon.com (AMZN 0.14%) founder and CEO Jeff Bezos. Earlier this week, the Amazon honcho's company unveiled the results of the auction for its first space ticket, and the leading bid was a whopping $2.4 million.

As a result, "We remain positive on the fundamentals of the [Virgin Galactic] offering as well as the scarcity of the experience provided to customers," Walton wrote.

Although it's early days, the twin effects of the new test flight and the robust demand for that space flight ticket are putting some real zip into Virgin Galactic's shares. Walton's hopeful note also helps. On Friday, the company's stock closed 6.4% higher.