Please ensure Javascript is enabled for purposes of website accessibility
Log In Help Join The Motley Fool
Free Article Join Over 1 Million Premium Members And Get More In-Depth Stock Guidance and Research
By Daniel Foelber - May 25, 2021 at 10:03AM

These three value stocks have reliable business models that can support their payouts.

A lumber linchpin, a pipeline powerhouse, and a defense dynamo may not have much in common on the surface. But as investments, Weyerhaeuser (WY 1.26%), Kinder Morgan (KMI 0.54%), and Lockheed Martin (LMT 1.26%) combine financial health and reliable cash flow to support their dividends. These businesses did well during the pandemic and should experience moderate growth this year too.

All three companies have price-to-earnings (P/E) ratios below 25, compared to an average P/E ratio above 40 in the S&P 500. But there is a lot more to each of their values than this simple financial metric. Here's what makes this trio of embarrassingly cheap dividend stocks worth buying now. 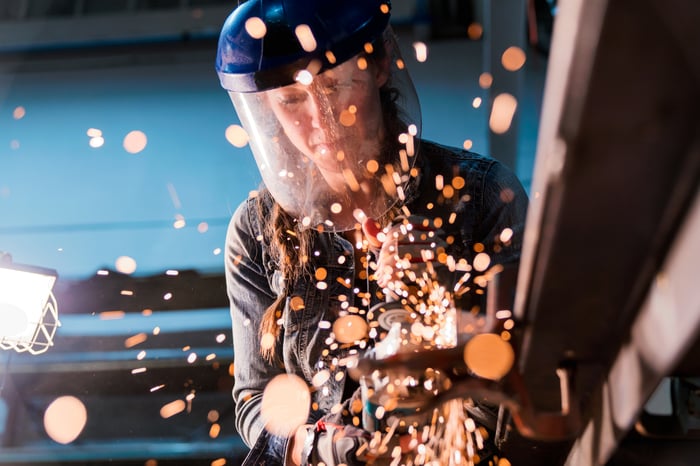 While certainly not a household name, timberland owner and sawmill operator Weyerhaeuser has been one of the best-performing industrial stocks over the past year. Its shares have nearly doubled as demand for lumber to support the U.S. housing boom continues to grow.

Weyerhaeuser offers investors a nice combination of short-term upside from the lumber boom along with a diversified business model that can withstand a decrease in lumber prices. With a Moody's credit rating of Baa2 and an S&P rating of BBB, its credit rating is higher than most of its competitors'.

Weyerhaeuser's balance sheet is in its best shape in five years. Lacking the pressure to pay down debt, Weyerhaeuser should be able to return the bulk of its outsized earnings to shareholders in the form of special dividends.

Weyerhauser hasn't declared a special dividend since converting to a Real Estate Investment Trust (REIT) in 2010. However, the company's new "base plus variable supplemental" dividend framework, which was announced in the fourth quarter of 2020, should lay the groundwork for around one special dividend per year going forward.

Given the strength of the first quarter and management's guidance for a strong second quarter, there's a good chance that Weyerhaeuser could very well top last year's already impressive results.

Kinder Morgan was one of the few companies that actually benefited from the Texas winter storm. The one-off windfall bolstered its first-quarter results to kick off what should be a fairly good year for natural gas stocks.

As good as the first quarter was, Kinder Morgan deserves credit for generating strong operating cash flow throughout 2020. Its full-year adjusted EBITDA fell only 9%, largely thanks to its fee-based contract model that helps protect against commodity price risk. Kinder Morgan's low spending means it's unlikely to be a fast or even moderate grower. But its stable cash flow makes it an ideal and reliable dividend stock.

As we head into summer, oil and natural gas prices should continue to be higher than last year as demand rises for power and transportation fuels. Kinder Morgan doesn't directly benefit from commodity price increases as much as other players. But consumer demand (and high prices) for natural gas is important for Kinder Morgan's long-term stability. Steady or rising demand justifies existing infrastructure and new projects. But declining demand or preference for alternative fuels could make it uneconomical to produce or transport fossil fuels over the coming decades. Declining demand over time is one of the most common bear cases for pipeline stocks. However, natural gas continues to prove itself as a nice complement to renewable energy.

Like Kinder Morgan and Weyerhaeuser, Lockheed Martin's business performed just fine during the pandemic. In fact, it recorded record-high revenue and net income. Lockheed's customers are the U.S. government and its allies, which are known to be reliable buyers. Stable contracts and multi-year projects add consistency to Lockheed's business.

A good yardstick to gauge demand for Lockheed's products and services is the U.S. Department of Defense's national defense budget, which is expected to be just 1.7% higher in fiscal year 2022 than in fiscal year 2021. Sure enough, Lockheed's preliminary guidance called for just a 2% increase in 2021 sales compared to last year. However, the midpoint of the company's latest guidance calls for $68 billion in revenue and $26.55 in diluted earnings per share (EPS). If it meets this new guidance, Lockheed will grow revenue by 4% and diluted EPS by 9.3%, which is all the more impressive considering last year's difficult comps. 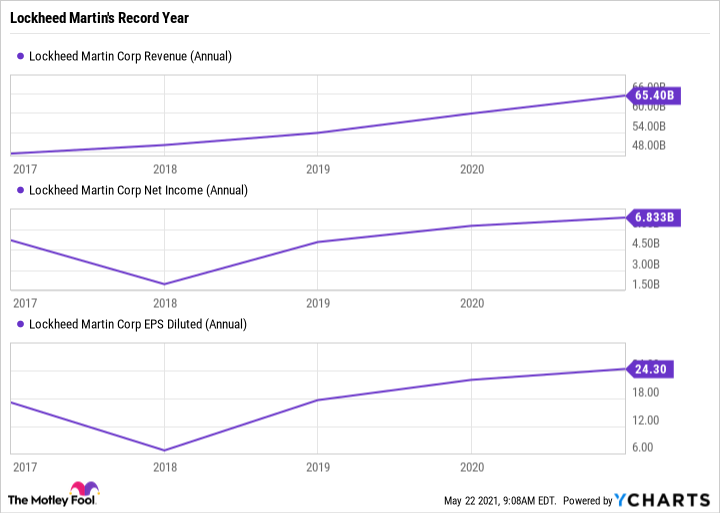 Steady low-single-digit defense spending growth underscores Lockheed Martin's stalwart status as a great dividend stock. In the first quarter, it bought back $1 billion in shares and returned $739 million to shareholders through dividends.

While Lockheed continues to distribute the majority of free cash flow to shareholders through buybacks and dividends, it also offers investors a fair share of upside. So much so that Lockheed Martin is a top 10 holding in two of Cathie Wood's six actively managed funds -- the Autonomous Technology & Robotics ETF (ARKQ 2.75%) and the Space Exploration & Innovation ETF (ARKX 1.90%).

Lockheed Martin's investments into its space segment through satellites, nuclear defense programs, and hypersonic weapons build upon its leading position in aeronautics, giving it growth potential that should pique the Pentagon's interest for years to come.