Please ensure Javascript is enabled for purposes of website accessibility
Log In Help Join The Motley Fool
Free Article Join Over 1 Million Premium Members And Get More In-Depth Stock Guidance and Research
By Billy Duberstein - May 26, 2021 at 6:45AM

Alphabet's self-driving-car unit is further off from a large-scale autonomous driving service than many first thought -- but it may not be all bad news.

Although the stock of Google parent Alphabet (GOOG 0.19%) (GOOGL 0.33%) is up a healthy 34% on the year, its self-driving-car unit, Waymo, has had a bit of a rocky start to 2021. Waymo's former CEO, John Krafcik, just resigned in early April, and six other top executives have followed him out the door.

A few years ago, several self-driving-car executives predicted we would all be riding around in autonomous taxis by now. However, things haven't gone quite as planned. Leading ride-sharing platforms including Uber and Lyft even threw in the towel, selling their autonomous research units over the past few months. Many now say it could be decades before the promise of self-driving tech is realized, if at all.

So, should Alphabet investors chalk up Waymo as a bust? Or is there still hope for it to be a meaningful contributor to Alphabet's future? 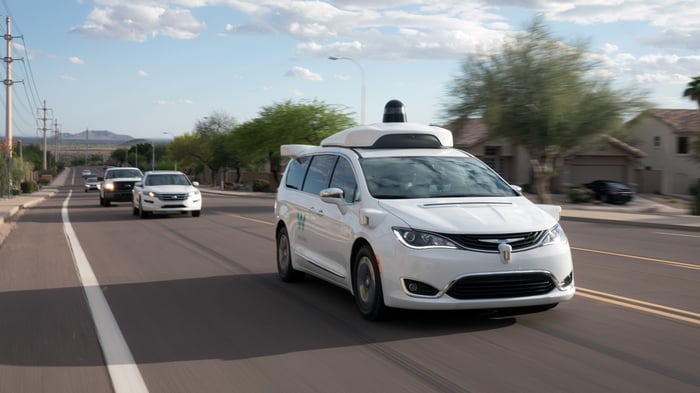 How Waymo got to this point

Krafcik had initially come on board as CEO of Waymo back in 2015, six years after Alphabet's self-driving "moonshot" research project kicked off in 2009. At the time, the higher-ups at Alphabet thought the technology was ready for primetime. That's why the company brought in Krafcik, who isn't a technologist, but rather a former auto executive, to ink partnerships with automobile OEMs and scale the business.

The following year, Alphabet formally spun off the self-driving project into its own autonomous unit within Alphabet, indicating that the unit was ready to stand on its own. At the time, Krafcik said, "Our cars can now handle the most difficult driving tasks, such as detecting and responding to emergency vehicles, mastering multilane four-way stops, and anticipating what unpredictable humans will do on the road."

Krafcik did what he was brought in to do, inking a deal with Fiat Chrysler, now Stellantis (NYSE: STLA), for 500 Pacifica minivans, which the company used initially to do more real-world testing before launching its autonomous ride-hailing trial in the relatively wide, pedestrian-free streets of Phoenix in December 2018 -- albeit with human safety drivers behind the wheel. In December 2020, the Phoenix taxis began operating without human safety drivers, though still monitored by a remote support team. There have also been murmurs that Waymo is expanding to other cities, though no announcement has yet been made.

So, what's been the hold-up?

It's not only Waymo that has fallen well behind targets, of course. All rivals, including Tesla, have badly missed their target dates for an autonomous ride-hailing service.

The culprit? Probably an obvious case of the daunting amount of variables a machine-learning algorithm must master to provide near-100% safety.

In a recent New York Times article on self-driving technology, a current Waymo engineer described the process as akin to peeling back an onion -- only the onion has a massive number of "layers": "You have to peel back every layer before you can see the next layer. ... Your car has to be pretty good at driving before you can really get it into the situations where it handles the next most challenging thing."

Obstacles as basic as merging in heavy traffic or deciphering a flare on the road, or as obscure and rare as identifying flower blossoms and soap bubbles -- which can throw off LiDAR if misinterpreted -- were mentioned in the Times article as the diverse kinds of variables that can throw off current self-driving sensors. When you think about all of the myriad objects a vehicle can encounter, the task of educating even the most advanced AI neural net can seem like an unending task. And it's proving to be just that.

Former Waymo and current Aurora engineer Chris Urmson was even quoted in the Times article as saying, "This is a transformation that is going to happen over 30 years and possibly longer."

Is this a disaster for Alphabet? Maybe, maybe not.

At first glance, the Waymo project may seem like a failure. After all, Alphabet just reported a $1.15 billion loss in its recent quarter on its "Other Bets" segment, which includes Waymo, after burning $4.5 billion on that segment last year. So, it may seem as if Waymo is nothing but a money pit eating shareholder value.

However, the good news is Alphabet's current management, especially its disciplined CFO, Ruth Porat, seems to realize the investment may take longer than expected. In an encouraging sign, Waymo raised $2.25 billion in outside financing from prominent investors last March -- a financing round that was later expanded to $3.25 billion. According to recent press reports, Waymo is discussing another $4 billion financing round today. So at least Alphabet won't be footing this entire bill itself. Meanwhile, prominent venture capitalists such as Silver Lake seem to think Waymo's technology will eventually pay off, since they and others are putting significant money into the unit.

Waymo has also now pivoted to promote longtime technical director Dmitri Dolgov and policy director Tekedra Mawakana to co-CEO positions. A technologist and a policy expert seem like the exact skill-sets the company needs right now to get Waymo closer to the finish line, so their promotion seems like a wise move.

If Waymo does pay off, it could pay off big

The harder a technology is to get right, and the greater the amount of investment required, the higher the barriers to entry are for that service. As an early mover with over $100 billion in cash, Alphabet is bound to be one of the last men standing if the self-driving technology catches up with the hype. If that happens, Alphabet will still own a large portion of what will likely be a highly competitively advantaged service.

In another positive for shareholders, it doesn't appear the market is giving much value to the Waymo unit anyway. Alphabet's core businesses in digital advertising and cloud computing can easily justify its market cap today, at least in this shareholder's humble opinion. And despite the cash burn in the Other Bets segment, Alphabet is still highly profitable and buying back more and more stock.

So, Waymo still appears to be a high-upside but cheap call option today. Given the continuing challenges, it's probably fair for investors to regard it as such, rather than something that will pay off anytime soon. But it doesn't mean that option won't pay off handsomely 10, 20, or even more years down the (very long) road.