Please ensure Javascript is enabled for purposes of website accessibility
Log In Help Join The Motley Fool
Free Article Join Over 1 Million Premium Members And Get More In-Depth Stock Guidance and Research
By Jason Hawthorne - May 27, 2021 at 5:47AM

It's easy if you have time, patience, and these companies in your portfolio.

Many investors say the best advice is to buy great companies and then do nothing. It isn't exciting, but it is the easiest way to retire rich. Costco Wholesale (COST 0.94%) and Rollins (ROL 0.87%) are perfect candidates for that approach thanks to a few characteristics they share.

Both have businesses that are incredibly stable, demonstrating the ability to thrive during all economic conditions. Another characteristic is sustainability. The companies have shown an aversion to debt, which has made them bulletproof even during the scariest financial crises. Finally, neither management team has been afraid to return excess cash to shareholders when it didn't have a better use for it. Let's dig deeper to show how each of these traits plays a role in rewarding shareholders over time. 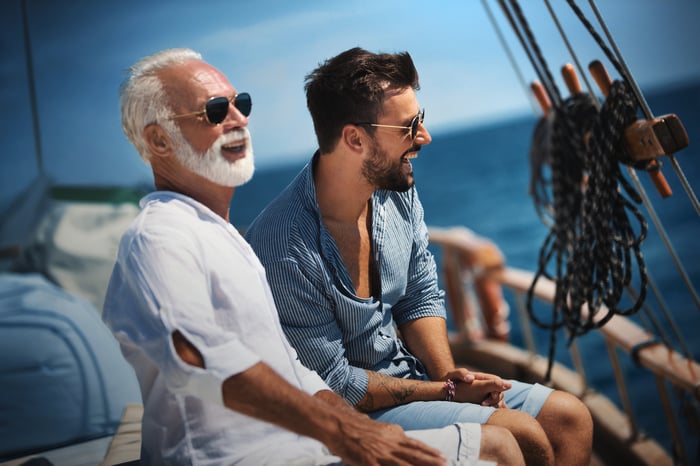 Both companies have shown consistency through all economic conditions

Costco's stability is a testament to its membership model, where customers must pay an annual fee to shop at the store. The company actually works to lower prices on everything it sells, essentially making no money on them. One thing consumers love is low prices. That strategy has driven membership from 21.1 million in 2001 to 105 million in 2020. Those low prices and membership fees have resulted in an operating margin that has hovered between 2.5% and 3.3% for each of the past 20 years. That's remarkable consistency even through three recessions.

Rollins, a global leader in pest control, has shown similar consistency. It has posted annual revenue growth of at least 4% for the past 15 years. It turns out, even in tough times, people want to be pest-free. Given the recent disruption from the pandemic, the value of an unwavering stream of sales is more apparent than ever.

Neither company relies on debt to fund operations

Costco's debt has increased in the past few years, from $6.5 billion in 2018 to $10.3 billion today. That may sound like a lot, but it's only one-fiftieth of annual earnings before interest and taxes (EBIT). In fact, the company's net debt -- cash and equivalents minus total debt -- is negative, almost -$6 billion to be precise. Management would be justified in taking on a lot more debt but the company has always shied away from leverage.

Over the years, Rollins has been willing to take on a little debt to make strategic acquisitions. The company's practice has been to then turn around and use free cash flow to promptly pay off its borrowings. It was debt-free in 2018 prior to acquiring Clark Pest Control for $361 million. Since then, the company has followed its game plan of paying it off. Its net debt is currently about $100 million with interest of less than one one-hundredth of annual EBIT.

Costco has been a frequent issuer of special dividends. Although the company pays a quarterly dividend of $0.79 and yields about 0.8%, it has issued several one-time payouts over the years. Last year, shareholders got an early holiday gift of $10 per share in December. Previous payouts had been $5 per share in 2015 and $7 per share in 2012. Not accounting for the special dividends, the regular payout has climbed from $0.40 to $2.89 since being initiated in 2004.

Rollins also has a long history of special dividends. The company handed out an extra distribution in December 2020, just as it has at the end of every year since 2012. Like Costco, Rollins currently yields about 0.8%. The annual payout has climbed from less than $0.02 in 2001 to almost $0.50 in 2020.

It may be surprising to find out that neither company has ever yielded above roughly 1.6%. That's the power of an ever-increasing payout. Those who bought shares of Rollins a decade ago are getting an annual yield of 5.5% on the money they originally invested. For Costco, it's 3.5%. Those numbers don't even include the special dividends. Adding those in makes it 7.5% and 15.4%, respectively. 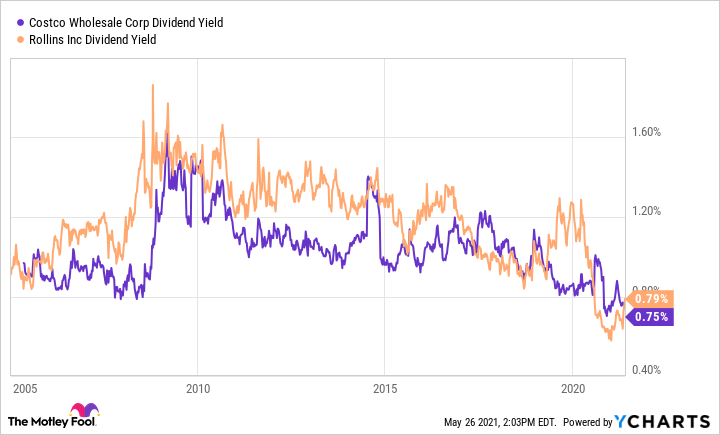 The easiest path to wealth is often the least exciting one

The rare combination of consistency, aversion to debt, and shareholder-friendly capital allocation make Rollins and Costco two perfect businesses to buy and never sell. Those who bought shares of each at the beginning of 2000 have seen their investments grow 5,680% and 746%, respectively. That may seem like forever, but the long term is what investing to become a millionaire is all about.