Please ensure Javascript is enabled for purposes of website accessibility
Log In Help Join The Motley Fool
Free Article Join Over 1 Million Premium Members And Get More In-Depth Stock Guidance and Research
By Parkev Tatevosian - May 27, 2021 at 3:57PM

The worldwide coffee chain sees a growing opportunity outside of the U.S.

While the effects of the coronavirus pandemic were not devastating for Starbucks (SBUX -0.01%), they were definitely a headwind. Many of its popular coffee shops were closed at least temporarily for in-person seating -- turning away a lucrative source of revenue. The combined effects of the pandemic slashed operating profits by more than half year over year in 2020. And COVID-19 is not finished disrupting the lives of people worldwide.

At the onset of the pandemic, millions of workers worldwide shifted to remote working. That left office buildings in downtown business districts virtually empty. Since Starbucks has plenty of locations in and near business districts, the remote working trend has hurt sales in those areas. That gave Starbucks the opportunity to close many of its stores in dense locations. Those closures led to year-over-year declines in store counts in the U.S. 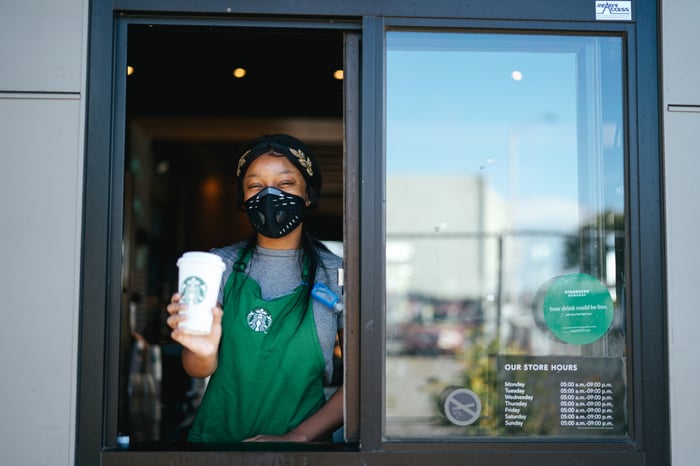 In its battle to bounce back from the effects of the coronavirus pandemic, it appears that Starbucks is now prioritizing international markets for growth. In its most recent quarter, Starbucks reported opening a net of five new stores. When you break down the change in store count, you see that in the Americas, Starbucks has 151 fewer stores year over year. In its international segment, it has 1,044 more locations than the same quarter last year.

What's more, for the fiscal year 2021, Starbucks is guiding investors that it will open a net of 1,100 new locations. And again, it will emphasize international growth by opening 1,050 of the 1,100 internationally (approximately 600 of that total will be in China). That's a signal that Starbucks potentially sees better economics for its stores outside of the U.S. Certainly, its international stores operate at a better profit margin at the store level, 55.2% versus 48.4% domestically.

The emphasis on international markets may be accelerating because of the pandemic, but it was not started because of it. Starbucks had started this shift several years ago as it anticipated reaching saturation in the U.S. market.

International markets are generally characterized with higher growth potential, especially developing markets, but they also come with higher risk. Starbucks' increasing concentration of locations internationally could boost revenue growth above its previous 10-year compounded annual growth rate of 8.2%, but it may become a moderately riskier stock. For example, because as international revenue increases as a portion of overall revenue, the risk from foreign exchange rate fluctuations increases.

I say only moderately riskier because the heightened risk of international markets will provide diversification benefits by reducing the concentration risk of the Americas segment. Overall, it should be a net positive for shareholders in the long run.

Starbucks shares are not cheap, trading at 37 times forward earnings. Still, shareholders who add the stock today are likely to find out that the shares are worth more 10 or 20 years from now. However, keep in mind that plenty of uncertainty remains in its recovery from the effects of the pandemic.