Please ensure Javascript is enabled for purposes of website accessibility
Log In Help Join The Motley Fool
Free Article Join Over 1 Million Premium Members And Get More In-Depth Stock Guidance and Research
By Keith Speights - May 29, 2021 at 6:04AM

You definitely don't want to overlook their growth prospects.

Some stocks receive a lot of attention. You know the ones I'm talking about. They're the stocks you see covered heavily by financial publications and TV shows.

However, there are plenty of less-publicized stocks that, in many cases, are even better picks than the ones that are frequently in the limelight. You can find such companies in nearly every sector, but these three overlooked healthcare stocks stand out to me as great buys right now. 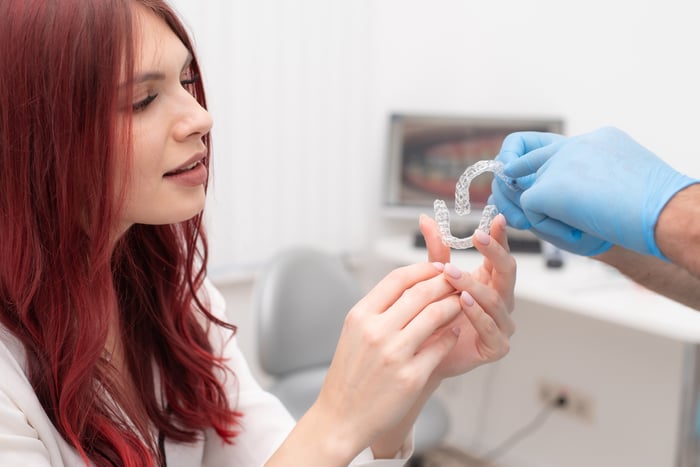 Back in 2017, Align Technology (ALGN 0.56%) ranked as the best-performing stock in the S&P 500 index. Since then, though, the orthodontic-device maker hasn't been in the spotlight all that much. However, it's not because the company's growth prospects have evaporated.

Granted, those year-over-year comparisons were helped by Align's dismal performance in the prior-year period, when sales plunged due to the COVID-19 shutdowns. Still, the company is clearly on a roll with demand increasing for its Invisalign clear aligners and iTero intraoral scanners.

Align should be able to keep its momentum going. It's aggressively marketing Invisalign in the U.S., and is also expanding into additional international markets. This often-overlooked stock appears to be in a great position to keep smiles on the faces of orthodontic patients and investors for a long time to come.

How many times have you heard about the Pfizer COVID-19 vaccine in recent months? I suspect a lot. But some people forget that the vaccine was actually developed by Pfizer's German partner, BioNTech (BNTX 1.11%).

There's never been a better time in BioNTech's history than right now. The company reported blowout Q1 results earlier this month. Revenue skyrocketed nearly 7,300% year over year to 2.05 billion euros (roughly $2.5 billion), and it posted its first-ever profit -- 1.1 billion euros (in the ballpark of $1.3 billion).

As great as those Q1 numbers are, the future looks even brighter for BioNTech. The company, along with its more famous partner, recently signed a deal with the European Union to supply it with up to 1.8 billion more doses of their COVID-19 vaccine through 2023.

BioNTech now has a hefty cash stockpile to invest in its pipeline. The drugmaker expects to report at least four updates from clinical studies in 2021. CEO Ugur Sahin predicts that BioNTech will launch several new products over the next five years. Chances are that you'll be hearing a lot more about this up-and-coming biotech.

You can get a feel for how far under the radar a given stock is flying by looking at its search engine trends. DermTech (DMTK 8.45%) barely registers in online searches. However, the company is quietly revolutionizing one of the most critical healthcare markets.

More Americans are diagnosed with skin cancer each year than all other types of cancer combined. The current standard approach for diagnosing one of the worst types of skin cancer, melanoma, is to perform a visual assessment, cut out tissue to get a biopsy, then send the biopsy to a lab for histological examination under a microscope. Out of every 25 biopsies, only one case of melanoma is diagnosed.

DermTech offers a better and cheaper alternative. With its Pigmented Lesion Assay (PLA) product, an adhesive patch is placed over the suspect area of skin. The patch is removed and sent to DermTech's lab where a genomic analysis is performed on the cells that have adhered to it. PLA is 17 times less likely to miss a diagnosis of melanoma than the biopsy and histology approach. It's also around 24% less expensive per lesion tested.

Melanoma testing is just the start for Dermtech. The company is applying its skin genomics platform to diagnosing other types of skin cancer, as well as evaluating ultraviolet ray damage and skin cancer risk. It estimates the total addressable market for these services to be around $10 billion annually. With DermTech's market cap at around $1.2 billion right now, the stock should have a huge growth runway ahead of it. And maybe a lot more online searches.