Please ensure Javascript is enabled for purposes of website accessibility
Log In Help Join The Motley Fool
Free Article Join Over 1 Million Premium Members And Get More In-Depth Stock Guidance and Research
By Keith Speights - Apr 29, 2021 at 6:10AM

There was a lot to like with the orthodontic device maker's latest quarterly performance.

The last time Align Technology (ALGN 4.51%) reported its earnings, the company posted record results. The stock has been on a roll as well, soaring 16% year to date. That momentum seems likely to continue.

Align announced its first-quarter results after the market closed Wednesday. The healthcare stock jumped nearly 5% in after-hours trading. Here are the highlights from Align's Q1 update. 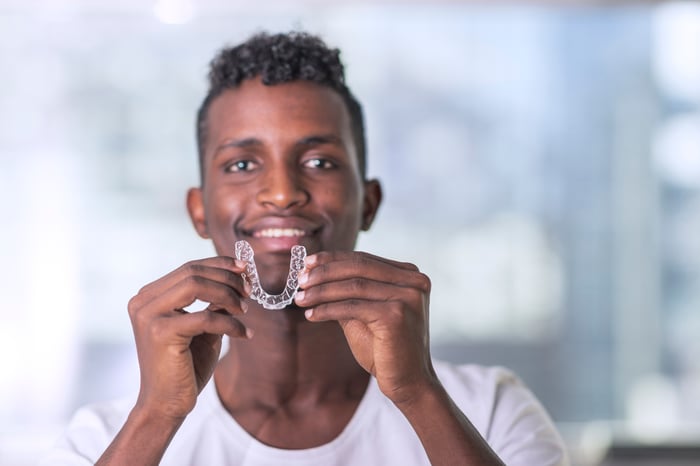 Align reported revenue in the first quarter of $894.8 million, a huge 62% year-over-year jump. This result trounced the average analysts' revenue estimate of $816.1 million.

How did Align's bottom line look in the first quarter? The orthodontic device maker announced net income of $200.4 million, or $2.51 per share, based on generally accepted accounting principles (GAAP). In the prior-year period, Align generated GAAP earnings of $1.5 billion, or $19.21 per share.

In case you were wondering, Align yet again set a record with its Q1 revenue. The strong year-over-year comparisons aren't surprising, considering that the COVID-19 pandemic negatively impacted the company's performance in the first quarter of 2020. However, Align also delivered impressive quarter-over-quarter growth.

Align benefited from higher utilization rates in North America in the first quarter with orthodontists and general practitioner dentists. Its total cases shipped increased 2.4% quarter over quarter to 78,605, with especially strong growth in international markets. The company's imaging systems and CAD/CAM services revenue also jumped 5.8% sequentially to an all-time high of $141.5 million.

Align expects the good times to keep on rolling. The company projects full-year 2021 net revenue of between $3.7 billion and $3.9 billion. The midpoint of that range reflects a 54% year-over-year increase. As usual, Align anticipates that it will generate more revenue in the second half of the year than it will in the first half.

The company ended the first quarter with cash and cash equivalents totaling $1.1 billion. Look for it to put some of this money to use buying back shares. Align stated that it expects to repurchase $100 million of its stock during the second quarter, which will round out the $600 million buyback program announced in May 2018.

After its impressive Q1 performance and solid guidance, Align appears to be in a good position to continue delivering for investors. It arguably ranks as one of the best frequently overlooked healthcare stocks on the market.