Please ensure Javascript is enabled for purposes of website accessibility
Log In Help Join The Motley Fool
Free Article Join Over 1 Million Premium Members And Get More In-Depth Stock Guidance and Research
By Sean Williams - May 31, 2021 at 5:51AM

Investing in great businesses over the long run is an unrivaled path to financial independence.

Today, as we gather with friends and family, or simply enjoy a day off from work, let's not forget about the millions of people who've fought valiantly for our country since it declared its independence 245 years ago. On Memorial Day, we honor those more than 1.2 million people who've made the ultimate sacrifice throughout history to preserve the freedoms we have today, including the freedom of speech, the right to vote, and the right to chart our own financial course.

For more than a century, the stock market has offered the opportunity for John and Jane Q. Public to buy stakes in great businesses and build their wealth over time. Although stocks haven't always been the top-performing asset year in and year out, they've run circles around other investment vehicles, such as housing, bonds, and gold.

If you're looking to chart your path to financial independence, the following five superior stocks should be instrumental in helping you achieve your goal. 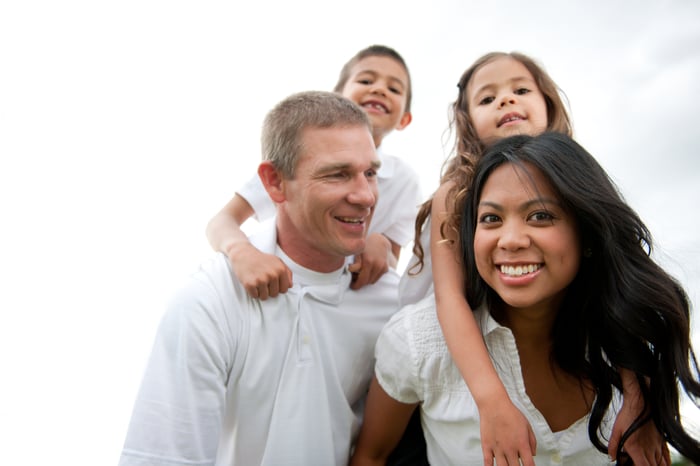 Don't let market cap be a deterrent. Great companies have large market caps precisely because they've been executing at a higher level than their competition. Even with a $1.65 trillion market cap, Amazon.com (AMZN -1.69%) could easily double in value over the next couple of years.

Most people are probably familiar with Amazon's dominant online marketplace. I mean, who hasn't purchased something within the past year on Amazon? According to an April report from eMarketer, Amazon now controls 40.4% of all online sales in the United States, the largest economy in the world by gross domestic product. This online success has encouraged more than 200 million people to sign up for a Prime membership, which only cements the loyalty of these shoppers to Amazon's ecosystem of products and services.

Equally important is Amazon's cloud infrastructure platform, Amazon Web Services (AWS). Last year, with the U.S. economy navigating its way through the worst economic downturn in decades, AWS grew sales by 30% and now has an annual run-rate of $54 billion in revenue. Since the margins from AWS are substantially higher than Amazon's other operating segments, AWS will be the company's key to explosive cash flow growth in the years that lie ahead. 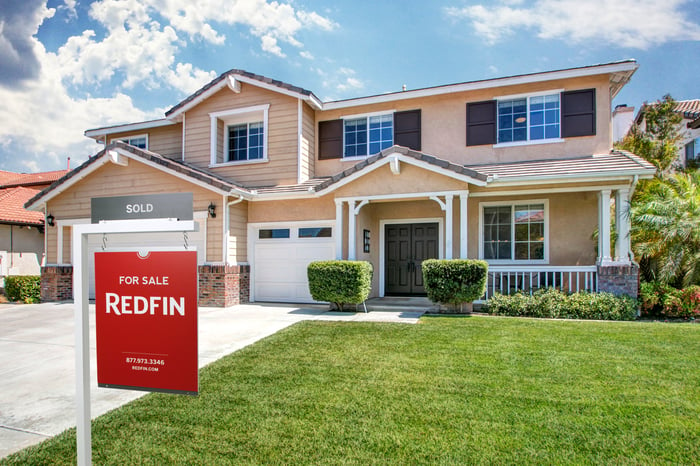 Another transformative stock that can help you achieve financial freedom over time is technology-driven real estate company Redfin (RDFN -6.70%). Although it's been clearly benefiting from historically low mortgage rates, and those rates won't stay near record lows forever, Redfin's combination of cost-savings and innovation are what'll make this company a major real estate player for decades to come.

One the biggest differences between Redfin and traditional real estate companies can be found in the listing fees. Traditional realtors charge around 3% of the selling value of a home when representing a client. Redfin charges either 1% or 1.5%, depending on how much buying and selling activity the buyer or seller has done with Redfin. An up to 2-percentage-point difference in listing fees might not sound like much, but when home prices are soaring as a result of low mortgage rates, the cost-savings Redfin can provide buyers and sellers is eye-popping. Not surprisingly, Redfin's share of the U.S. existing home sales has nearly tripled from 0.44% in 2015 to 1.14%, as of the first quarter of 2021.

Redfin also provides a level of personalization not seen with traditional realty firms. For instance, the RedfinNow service is offered in select cities and involves the company purchasing homes for cash without the hassles of showings and price haggling. Meanwhile, Redfin Concierge helps homeowners with staging and improvements that'll help them get top-dollar for their residence. 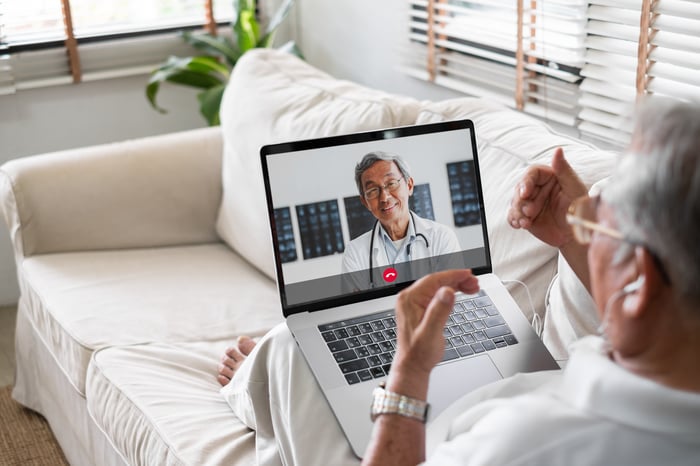 Healthcare stocks are known for their innovation, with possibly the biggest growth trend over the next decade being telemedicine. That's why telehealth kingpin Teladoc Health (TDOC -3.94%) can play a big role in helping you to reach financial independence.

Similar to Redfin and Amazon, the pandemic created near-perfect conditions for Teladoc to thrive. With high-risk and potentially infected people stuck in their homes, physicians turned to virtual visits to keep up with patients. Teladoc handled almost 10.6 million virtual visits in 2020 after just 4.14 million in the previous year.

But what folks are probably overlooking is how transformative telehealth can be. It's far more convenient for patients to stay home and consult with their doctor, and it's arguably easier for doctors to touch base with high-risk patients. The ease of communication should help lead to better patient outcomes, which health insurers will love. It also doesn't hurt that virtual visits are billed at a cheaper rate than office visits.

The icing on the cake for Teladoc is its purchase of applied health signals company Livongo Health last year. Livongo is known for using artificial intelligence to send tips and nudges to chronically ill subscribers to help them lead healthier lives. It was a profitable company when purchased by Teladoc and its subscriber count has soared. 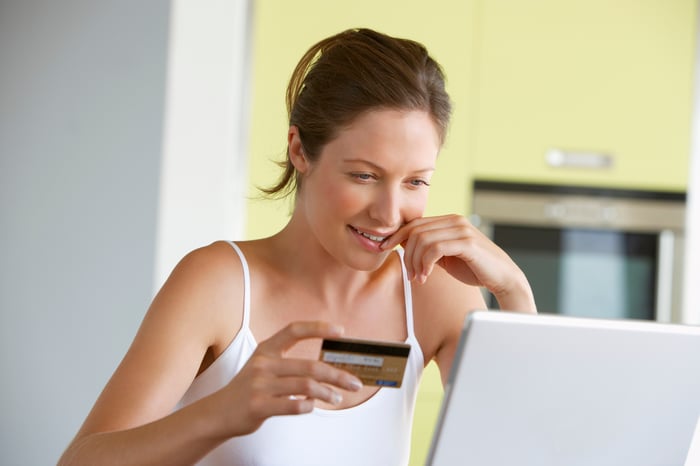 Yet another storied business that can help you charge forward to financial freedom is payment processor Mastercard (MA -1.11%). I'll once again remind you that just because a company has a sizable market cap does not mean it can't deliver big-time long-term returns.

One of the things that makes Mastercard such a great company is that it's cyclical. This means it thrives when the U.S. and global economy are expanding and it struggles when navigating a recession or economic contraction. The secret is that recessions often last just a few quarters, while periods of expansion last many, many years.

What's more, Mastercard has shunned lending in favor of payment processing. Though it is giving up interest income and fee-earning potential during periods of expansion, this decision also means Mastercard isn't hit with credit delinquencies during recessions. Thus, it's able to bounce back from downturns much quicker than other financial stocks because it doesn't have to set capital aside for potential losses.

And have I mentioned that much of the world still conducts its purchases in cash? There's a multi-decade runway for Mastercard to expand its infrastructure to underbanked regions of the world. 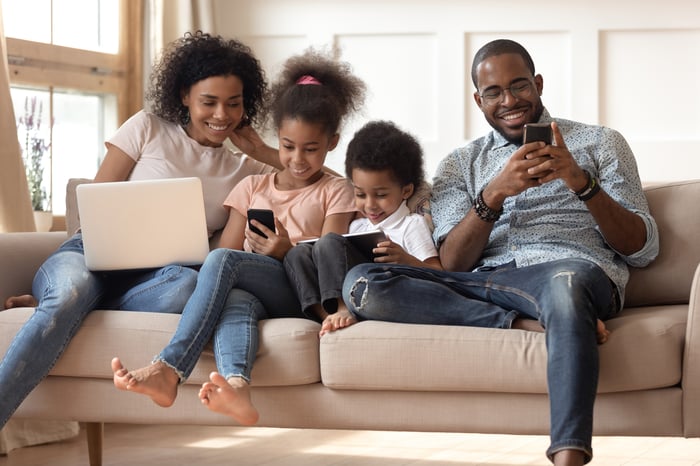 A fifth and final superb stock that'll put you on the path to financial independence is social media behemoth Facebook (META -1.79%).

When the curtain closed on the first quarter, Facebook claimed 3.45 billon unique monthly visitors to its owned social platforms. Approximately 2.85 billion visited its namesake site monthly, with another 600 million going to Instagram and WhatsApp. Put in another light, that's 44% of the world's entire population interacting with a Facebook asset each month -- and you wonder why advertisers are champing at the bit to place their message on the platform?

Here's something else to consider: Of the $84.2 billion in ad revenue generated in 2020, almost all of it came from Facebook and Instagram. Neither WhatsApp nor Facebook Messenger have been meaningfully monetized as of yet. If the company is growing by 20%-plus without running on all cylinders, imagine what it'll be capable of when these assets are monetized.

Facebook has ample opportunity delve beyond ads, too. Sales of its Oculus virtual reality devices are soaring, and the company could generate significant growth from online/digital payments in the future.