Please ensure Javascript is enabled for purposes of website accessibility
Log In Help Join The Motley Fool
Free Article Join Over 1 Million Premium Members And Get More In-Depth Stock Guidance and Research
By Dave Kovaleski - Jun 1, 2021 at 7:32AM

When you look at the stellar long-term track record of this ETF, you can see how it's possible.

It is never too late to start investing for your kids' college education, but the earlier you start, the much better off you will be. If college is just a few years away and you haven't saved much, your strategy will be much different than if your kids are still small, or perhaps not even born yet.

But for argument's sake, let's say your child is just starting preschool and your first college payment is 15 years away. Here's how you can save enough to pay for all four years with a single investment: the Invesco QQQ (QQQ -1.17%) exchange-traded fund (ETF).

College Planning 101: How much will you need?

The average cost for in-state tuition in 2021 is about $10,000 per year at a public college, according to the college cost specialists US News and World report and Education Data. . The average cost for room and board is about the same, so you're looking at $20,000 per year. Note, this is a national average for in-state tuition. In some states, it is going to be higher, in some cases much higher. And if you're looking at private institutions, cost will be higher still. But these calculations will give you a baseline to work off of. 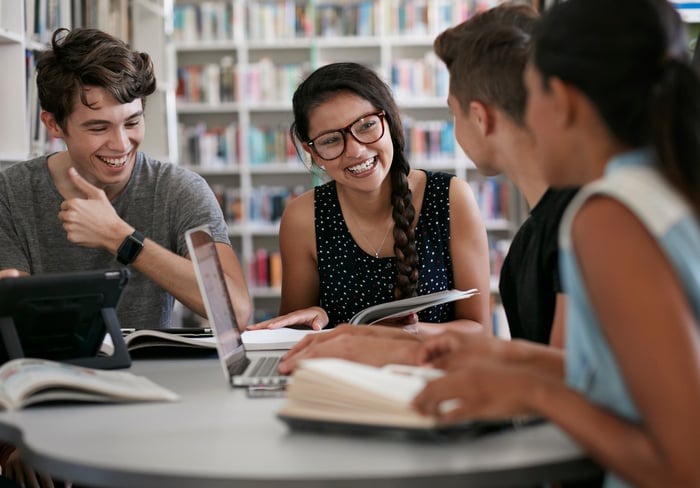 College Planning 201: How do I get there?

To make it simple, let's say your college costs in 2036 are right in the middle of the two projections above -- $200,000 for four years. Now, there's a good chance your brilliant kids will get scholarships or financial aid to offset those costs, but for the sake of this exercise, we'll take the worst-case scenario and say no aid or scholarships -- and we'll do this without taking out loans.

The Invesco QQQ is the fifth-largest ETF, with $160 billion in assets under management. It tracks the Nasdaq 100 index, which includes the 100 largest nonfinancial stocks on the market. It is heavily weighted toward the technology sector, as those companies have been the fastest growing over the years. So, this fund gives you access to the biggest and best technology stocks, including Apple (10.9%), Microsoft (9.5%), and Amazon  (8.3%) -- the three largest holdings.

This ETF has been a stellar long-term performer, generating an average annual return of 19.9% over the past 10 years through March 31, 2021. But since you're looking at college 15 years out, let's consider its returns over the past 15 years, which includes the Great Recession. In May 2006, the ETF was trading at about $34 per share; today it is trading at about $334 per share. Annualized over 15 years, that comes out to an annual return of about 16.5%.

Now throw in some scholarships and financial aid and you're there, hypothetically speaking.

Please note, however, that a 16.5% return over the next 15 years for the Invesco QQQ is simply based on the last 15 years. Past performance is no guarantee of future results, as the disclaimer goes. There are certainly rolling 15 year periods where the returns aren't that high. But this ETF has proven to be among the very best performers in its class over time -- and the most popular, so it's a great choice.

The key is to start as early as possible so reaching those goals will be much more manageable.