Please ensure Javascript is enabled for purposes of website accessibility
Log In Help Join The Motley Fool
Free Article Join Over 1 Million Premium Members And Get More In-Depth Stock Guidance and Research
By Parkev Tatevosian - Jun 2, 2021 at 8:34AM

Lowe's (LOW 0.37%) reported fantastic fiscal first-quarter results on May 19. While overall revenue for the period ending April 30 was nearly $5 billion higher year on year, net profits shot up by a massive 73.6%. The home improvement retailer rode the coattails of the economic stimulus-induced spending boom to another solid quarter.

Still, investors should be aware that, eventually, the home-spending tailwind will subside and Lowe's will likely return to revenue growth rates in the mid-single-digit percentages. So, let's consider what this excellent quarter means in the overall scheme of things for Lowe's stock. 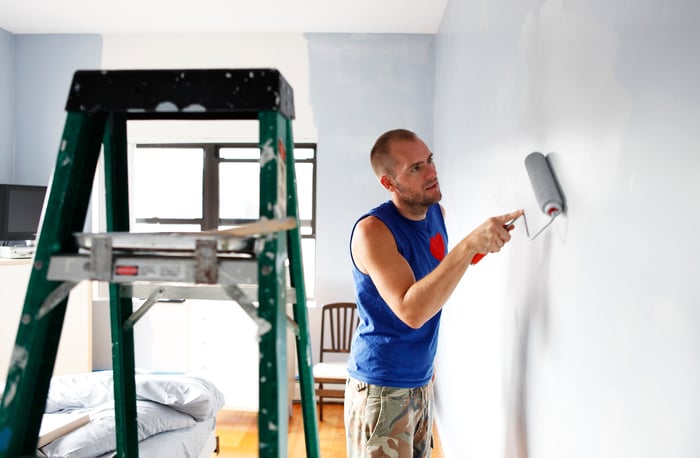 For its fiscal Q1, Lowe's reported comparable-store sales growth of 25.9% year over year. Overall revenue increased to $24.4 billion, up from $19.7 billion last year. That's an increase of 23.9% being driven by customers spending more on each visit they make to Lowe's.

Robust sales growth increased its profits -- the company reported Q1 earnings per share of $3.21, 82% higher than the EPS of $1.76 it reported in the same quarter last year. Sometimes a surge in sales comes at the expense of profits as companies slash prices or beef up promotions in order to get products out the door. That was not the case for Lowe's this time.

Here's what Lowe's management had to say about the company's excellent first quarter:

The Company delivered very strong financial results in the first quarter of 2021, with sales momentum continuing into May. The Company is currently tracking ahead of the Robust Market scenario provided at its December 9, 2020 Investor Update, which assumed fiscal 2021 sales of $86 billion. Better-than-expected year-to-date results and a supportive macroeconomic backdrop build the Company's confidence in its ability to deliver strong results for the fiscal year, including continued market share gains and the achievement of a 12% operating margin.

Is Lowe's stock a buy?

According to Statista, the home improvement market generated $450 billion in sales in the U.S. in 2020 and is projected to grow to $510 billion by 2024. That's a compound annual growth rate of 3.2%. It's not a fast-growing industry, to be sure.

However, Lowe's over the last decade has grown revenue at a compound annual rate of 6.3%. Further, it is confident it can gain market share in 2021 -- as it did in its first quarter. The confidence in increasing market shares is a result of investments made to capture more business from professional customers and investments to accelerate online sales. 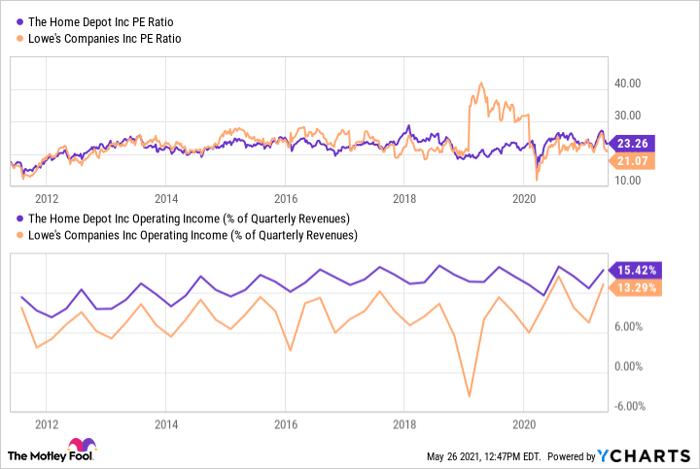 Lowe's is trading at a price-to-earnings ratio of 21 -- right around its historical average, and a roughly 10% discount compared to its main competitor, Home Depot (HD -0.29%). The discount may be justified considering that Home Depot consistently generates higher operating profit margins.

Still, given that Lowe's is likely to grow revenue in the mid-single-digit percentages, generate a double-digit percentage operating profit margin over the longer term, and is trading at a reasonable P/E ratio, investors can consider buying Lowe's stock.

Keep in mind, however, that economies around the world are in the middle of rebounding from a pandemic-generated recession unlike any experienced in modern times, so plenty of uncertainty remains about what's to come. That could be one reason why the market is reacting poorly to Lowe's fantastic first-quarter results -- shares are down 0.6% in the last month. Consumers are recovering from a once-in-a-lifetime event and that could be a recipe for disruption in shopping habits.

Therefore, it may be prudent for investors wishing to open a position in Lowe's to spread their stock purchases out over several months.