Please ensure Javascript is enabled for purposes of website accessibility
Log In Help Join The Motley Fool
Free Article Join Over 1 Million Premium Members And Get More In-Depth Stock Guidance and Research
By Anders Bylund - Jun 2, 2021 at 8:53AM

Management says that there's a turnaround going on. This Fool doesn't see it.

At first glance, digital coupon service Groupon (GRPN -2.74%) might look like a good investment today. The stock is down 18% over the last three months, including a 10% drop in May. Shares are changing hands at the bargain-bin valuation of 14.4 times forward earnings or 1.1 times trailing sales. At the same time, Groupon's bottom line swung to a modest profit in last month's first-quarter report. That must be a setup for a solid rebound, right?

Unfortunately, it's not that simple. You shouldn't fall into Groupon's value trap. Let me show you what I mean.

Like every other company, Groupon is wrestling with the fallout from the COVID-19 pandemic and navigating the return to normal market conditions. The global health crisis has certainly not been kind to this company, whose business model depends on putting consumers together with retailers and local experiences. Lockdowns and social distancing policies are painful for Groupon.

But Groupon has been suffering poor sales for a very long time, and the company rarely reports positive pre-tax profits. In other words, Groupon was in trouble long before the coronavirus came along. The stock has lost 63% of its value over the last six years and here's why: 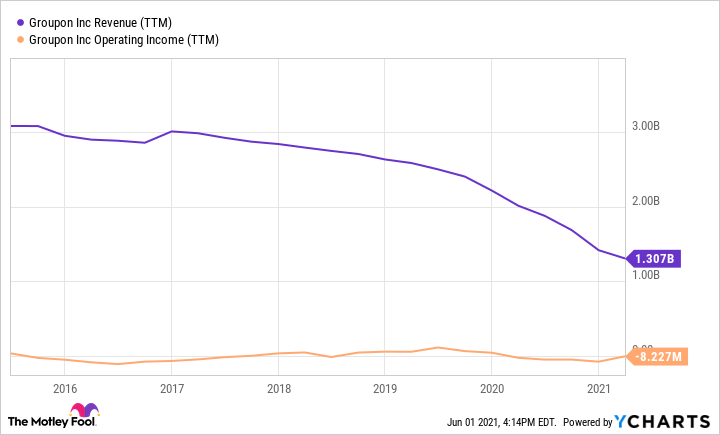 But the turnaround has started, right?

Groupon's first-quarter results showed some improvement, particularly on the bottom line. You saw the trailing operating income line nearly reaching the breakeven level. Net income landed at $14.4 million, up from a net loss of $210.9 million in the year-ago period. All is not lost, according to interim CEO Aaron Cooper.

On the earnings call, Cooper highlighted the ongoing cost-cutting efforts that should result in positive profits in 2022.

"We believe that we are well-positioned to deliver value to all of our stakeholders over the coming quarters and continue to benefit from the macro recovery," he said. "We have a plan for growth and we're executing on two strategic priorities: Expanding our inventory, and modernizing our marketplace."

The service's homepage has been revamped to reflect seasonal inventory changes and each user's personal preferences.

Cooper's turnaround plan sounds great on paper but he faces a daunting task. Groupon lost 40% of its active customers in North America over the last year while the international customer count decreased by 36%. The company dropped 3.8 million active accounts in the first quarter alone. Stemming that tide looks like a herculean task.

Furthermore, I'm not terribly impressed by Groupon's recent uptick in various profit metrics. Earnings would have remained negative if Groupon hadn't liquidated its operations in Japan during this reporting period. That's a one-time event that really doesn't count as a business improvement. 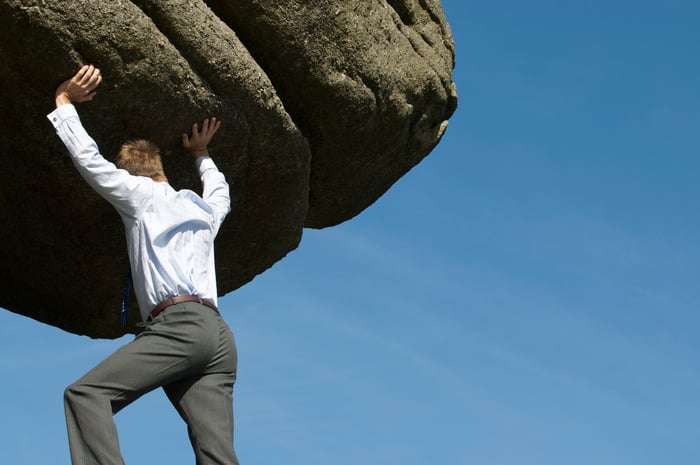 This turnaround is a sisyphean task. Image source: Getty Images.

In the end, Groupon's business model never made sense to me and a couple of tweaks to the web experience won't change that. The company must deliver value both to its coupon-clipping shoppers and to the businesses that issued the coupon deals in the first place. Adding value to that exchange was always a difficult task and it's only made harder by the cost-cutting turnaround effort.

The stock is cheap and only getting cheaper. I'm still not a Groupon buyer because I expect the price drop to continue for the foreseeable future. I wish the company well but there's no true turnaround going on here.