Please ensure Javascript is enabled for purposes of website accessibility
Log In Help Join The Motley Fool
Free Article Join Over 1 Million Premium Members And Get More In-Depth Stock Guidance and Research
By Keith Speights - Jun 4, 2021 at 5:55AM

Each of them has nearly tripled or more over the last 12 months and could deliver even greater returns over the long term.

Some stock prices are too high for many investors. That's unfortunate because there are quite a few great stocks with lofty share prices.

There's good news, though, if you're interested in profiting from the fast-growing cannabis industry. The share prices of most cannabis companies are affordable for nearly any investor's budget. Some of these inexpensive pot stocks also offer tremendous growth prospects and strong track records. Here are three winning cannabis stocks you can buy for less than $50. 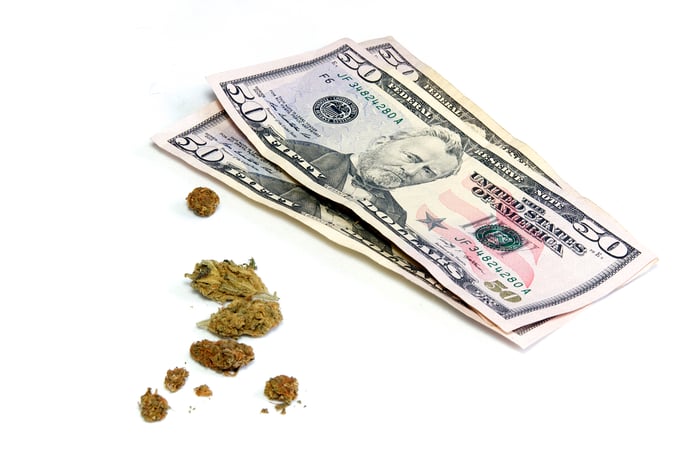 You can buy a share of Green Thumb Industries (GTBIF 2.50%) right now for around $30. The stock is up more than 20% year to date and has nearly tripled over the last 12 months.

The company already operates in several of the top recreational cannabis markets in the U.S., including California, Illinois, Nevada, and New Jersey. New York's legalization of recreational marijuana opens up a new growth opportunity. In addition, Green Thumb has operations in key medical cannabis markets, such as Florida, Ohio, and Pennsylvania.

We'll soon be able to add Virginia to the list. Green Thumb expects to close its acquisition of Dharma Pharmaceuticals in the second half of 2021. The deal will give it one of five vertical licenses in the state's medical cannabis market. Buying Dharma could also put Green Thumb in a good position to succeed in Virginia's recreational market, which opens in 2024.

Fifty dollars will go a long way if you want to invest in Jushi Holdings (JUSHF -0.53%). The stock currently trades below $6. So far this year, Jushi hasn't delivered a sizzling return with shares barely in positive territory. Over the last 12 months, though, the marijuana stock has almost quintupled. Jushi could also be a stock that could make you rich over the long term.

The company reported revenue of $41.7 million in the first quarter of 2021, up 29% from the previous quarter. Jushi isn't profitable yet. However, it generated positive adjusted earnings before interest, taxes, depreciation, and amortization (EBITDA) in Q1 of $3 million.

Like Green Thumb, Jushi is poised to win in the Virginia market as well. The company holds a license to serve the potentially lucrative medical cannabis market in northern Virginia, home to almost 30% of the state's population.

You aren't limited to just up-and-coming cannabis stocks like Jushi with a $50 budget, though. One share of Trulieve Cannabis (TCNNF 1.23%) will set you back less than $40. Trulieve stock has jumped more than 20% year to date and has more than tripled over the last 12 months.

Trulieve ranks as the 800-pound gorilla in Florida's medical cannabis market. The company operates 82 dispensaries in the Sunshine State and claims a market share of nearly 50%.

In addition to Florida, Trulieve currently operates in four other states -- California, Connecticut, Pennsylvania, and Massachusetts. It also received approval to operate in West Virginia.

The biggest story for Trulieve going forward, though, is its pending acquisition of Harvest Health & Recreation. This deal will give Trulieve a presence in 11 states. The combination of the two companies will create the largest and most profitable U.S. multistate operator.

Keith Speights has no position in any of the stocks mentioned. The Motley Fool owns shares of and recommends Green Thumb Industries, Jushi Holdings, and Trulieve Cannabis Corp. The Motley Fool has a disclosure policy.