HubSpot (HUBS -5.64%) started in 2006 with a focus on inbound marketing and created its first "hub" for small and medium-sized businesses. Since then, it's grown considerably and has made its shareholders richer along the way. On a Fool Live episode recorded on May 12, Fool contributors Brian Stoffel and Toby Bordelon discuss the company's latest results and how its efforts to expand its ecosystem will continue to drive growth long into the future.

Brian Stoffel: HubSpot is your big umbrella for small and medium-sized companies to handle all of their, basically, their content, their marketing. But they are focused on companies that have between 2 and 2,000 employees. They're shooting for super small, and now they got their start by focusing on inbound marketing. All inbound marketing is is instead of annoying ads, you draw people in with things like videos, by showing up at the top of a Google search, by visiting a blog. It's much more enjoyable from a customer standpoint.

Anyway, on to the results. Revenue was up 41%. The amount of customers they had was up 46%. Free cash flow was up 600%. But take that with a grain of salt too, because we're talking about a company that's just at the stages where it's free cash flow positive. Their outlook calls for 45% growth in the current quarter that we're in right now. So it's actually accelerating.

This is a company that for a long time, their dollar-based net retention would be slightly below 100%, and part of the reason for that is because they are working with these small, small companies. In a healthy economy, most small companies will fold up and cease to exist, and that's not HubSpot's fault. So because of that, it's under 100%. But recently, it's been over 100%. Again, all in all, I think, a very strong quarter for HubSpot.

Toby Bordelon: Cool. Focusing on that revenue growth. It looks to me when I look back at this, if you go back to their IPO in 2015, I think, their earning revenue growth has been slowly declining since then. They had a 57% and they declined to get into the low 30s. But now, we're seeing 40%, so it's turning around.

My question is, do you think this reversal here, is this sustainable, or is this just a pandemic-induced growth spurt that's going to go back to that steady decline again?

Brian Stoffel: I don't think it can continue accelerating ad infinitum. There's no way it's going to keep growing by 40% every quarter for the next five years. I just don't think that that's possible. At the same time, I do think it can have steady growth rates at least above 20% for the foreseeable future, and here's why.

When they went public, they just had one hub, and it was marketing. It was for companies [that] had between 20 and 200 employees. That's it. Today, they've got five hubs. These three [marketing, sales, and service] have been here for most of it. CMS, which is content management system, they introduced the last year, and they just announced a fifth hub in operations for smaller companies starting later this year. 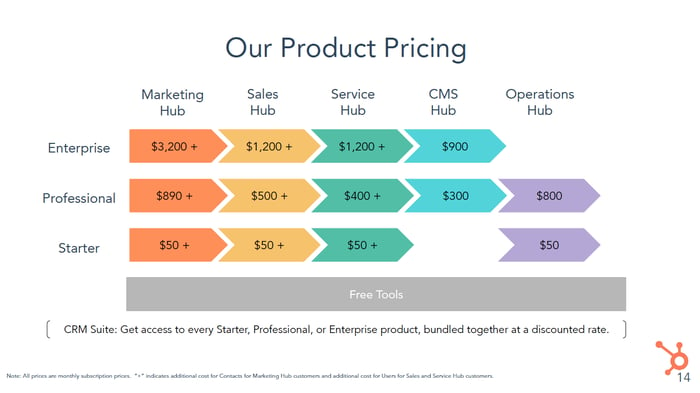 You can see here [image above] how much the company gets per month for each one of these hubs, depending upon which level they get. As those small companies do well, they're going to upgrade from starter to professional, from professional to enterprise and one company might start right here with the starter marketing hub, and as time goes on, expand in this direction to have more and more.

While I don't think that we're going to see, again, 45% growth -- I would be shocked if it was still at that level three years from now -- there's still a lot of room for it here, given the way that they've set their company up.

Toby Bordelon: Cool. We're looking for potentially some growth here in the existing customer, like adding on.