Please ensure Javascript is enabled for purposes of website accessibility
Log In Help Join The Motley Fool
Free Article Join Over 1 Million Premium Members And Get More In-Depth Stock Guidance and Research
By Will Healy – Jun 8, 2021 at 9:15AM

Comparing the potential of the social media giant with that of a niche player.

Facebook (META -1.69%) and Twitter (TWTR 0.43%) control two of the most widely visited social media sites in the world. Facebook has emerged as the choice for general social media, while Twitter has developed a successful niche in microblogging. Nonetheless, this dominance will not make Facebook a more lucrative investment by itself, so investors need to look at both companies and their financials more closely to decide which of the two media stocks is the better buy.

About 24% of the world's population, or 1.88 billion users, log onto a Facebook-owned website every day. Despite the potential to run out of new users, the massive growth continues. Digital ads drive the majority of its revenue, and the growth appears unlikely to stop anytime soon. As Facebook and its apps reach over 1 billion downloads on mobile devices, Facebook is building a trillion-dollar empire that includes a virtual reality (VR) segment and an increased e-commerce presence. 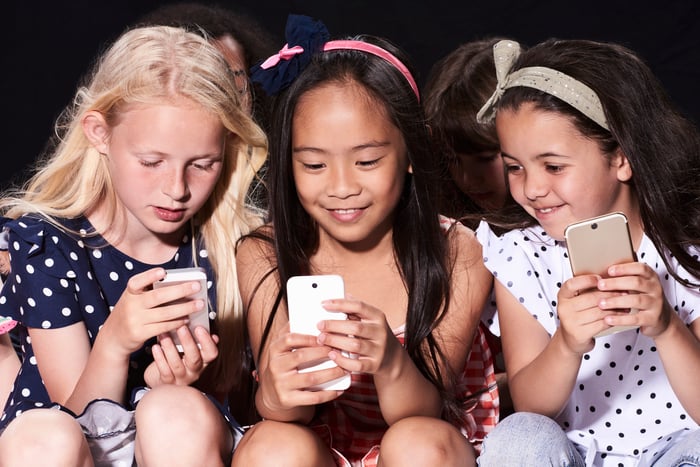 However, like with current offerings, Facebook's opportunity looks geared to a general audience compared with the more niche appeal of Twitter's subscription service. Additionally, Jack Dorsey runs two companies, and sharing his management time with Square makes it unclear whether Twitter is a priority for Dorsey.

A singular focus may have helped the more robust performance of Facebook. In the first quarter of 2021, Facebook's revenue of $26.2 billion climbed 48% compared with the same quarter the previous year. Thanks to slower growth in operating expenses, net income surged 94% over the same period to $9.5 billion. This exceeded the fiscal 2020 performance, where the company delivered 22% higher revenue and increased net income by 58% compared to 2019.

Other metrics appear to support these increases. Facebook's free cash flow of $7.8 billion for the quarter came in 6.5% from year-ago levels. Higher spending on share-based compensation and property along with paying expenses before they accrue reduced cash flows.

Still, it maintains a stockholders' equity (the value of Facebook after subtracting liabilities from assets) of about $133.7 billion. Also, with liquidity standing at approximately $64.2 billion, it maintains one of the more stable balance sheets in corporate America.

Twitter did not quite match this performance. Revenue in the first quarter increased by 28% year over year to just over $1 billion. The company also reported a net income of $68 million. Higher revenue, slower growth in operating expenses, and an $18 million income tax benefit contributed to the profitable quarter. Twitter reported a loss in the year-ago quarter despite receiving a $7 million income tax benefit.

In 2020, revenue increased 7% compared with 2019 levels. During the period, it also lost over $1.1 billion versus a profit of nearly $1.5 billion in 2019 as the cost of revenue and operating expenses grew at a faster pace than revenue. Twitter also paid $1.1 billion in income taxes in 2020. This was in stark contrast to 2019 when it received a $1.1 billion tax benefit.

In Q1 2021, quarterly free cash flow also spiked 67% during that period to $211 million. Unlike Facebook, it holds about $5.2 billion in debt. Nonetheless, with about $8.8 billion in liquidity and $7.7 billion in stockholders' equity, it maintains a solid balance sheet.

The debt burden also did not stop Twitter from outperforming Facebook over the last 12 months. During that time, Twitter's stock price has increased by more than 80%, compared with a surge of slightly above 40% for Facebook's stock. Despite the faster increase, Twitter remained the cheaper stock. It maintains a P/E ratio of 18, coming in well below the 28 earnings multiple for Facebook. 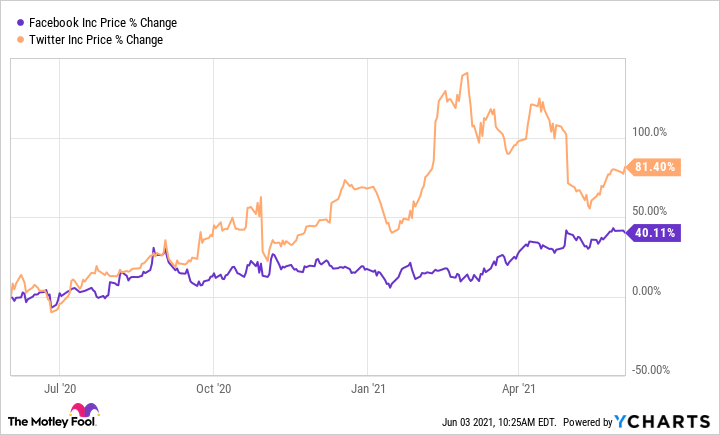 Facebook's higher valuation and its slower stock price increases over the last year should not deter investors from choosing it. Time will tell if Twitter can succeed with a subscription version or whether Facebook's VR headsets will become a hit with users. Nonetheless, Facebook delivers consistently faster earnings growth and holds more appeal to a generalized user base, increasing the chances that it will offer higher returns over time.