Rumors are the company is going to launch physical stores next.

Tech giant Amazon (AMZN -2.86%) has been slowly moving into the healthcare sector. In 2018 it acquired PillPack, which helps customers stay on top of their prescriptions by pre-sorting them and delivering them right to their homes. Then, late last year, it built off that and officially launched its Amazon Pharmacy business, which allows Prime members to save up to 80% off generic medication.

However, there could be an even bigger move on the horizon for the company. And it could make pharmaceutical retailers like Walgreens (WBA -0.05%) even more nervous. 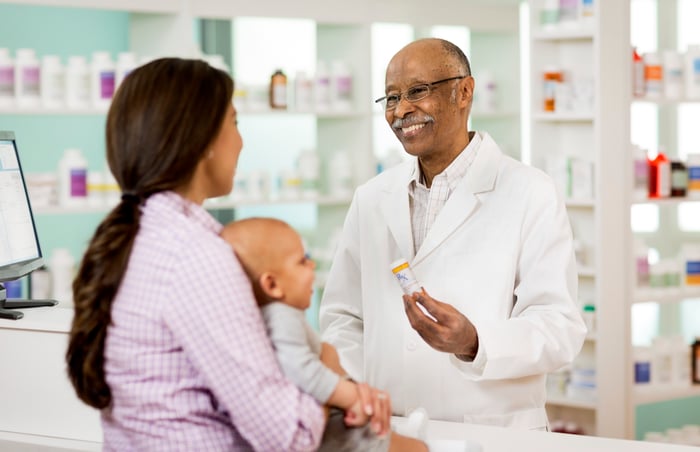 Are physical pharmacies next for Amazon?

According to a report from Business Insider last month, multiple sources claim that the tech company is looking into launching physical retail pharmacies. It isn't something that Amazon has confirmed and the sources say that even if it does happen, it could take more than a year before there is a significant rollout. The company is supposedly looking at setting up stand-alone stores and possibly even putting them inside its Whole Foods locations. If it decides to make the move, it would put Amazon in even more direct competition with not just pharmacy retailers but also Walmart, which has pharmacies within its stores.

Is this a good move for the business?

Amazon has shown in the past that it isn't afraid of getting into a new sector for the sake of growth opportunities, such as when it acquired Whole Foods back in 2017. The addition of more services to complement its existing offerings is something customers and investors have become accustomed to with the tech company.

But it won't be easy to get into the pharmacy retail business. Unless Amazon is looking to acquire an existing company, it will take time for it to become a major competitor. And even then, it's not an extremely lucrative business to be in; Walgreens hasn't posted a profit margin of more than 4% in any of its past five fiscal years. Its gross margin is razor-thin, normally hovering at around 20% of revenue.

And both Walgreens and CVS have also been remodeling their stores in an effort to draw in more consumers. CVS is turning its stores into HealthHubs that help patients with chronic conditions, including diabetes. It also offers wellness rooms, yoga, and more health-related products in its stores. Walgreens is taking it a step further and will have doctor's offices at many of its locations. In 2020, it announced it was investing $1 billion in VillageMD to launch up to 700 primary clinics within five years.

For Amazon, getting into a healthcare business where margin isn't great and it may need to spend even more resources than just a few years ago before all these remodels began could make this an undesirable move for the tech company. While having physical locations could draw in more customers and improve its shipping speeds, it's a strategy that could prove to be costly and not even profitable, at least not in the near term.

If Amazon does launch physical stores, it could take multiple years before it's in a position to wrestle away much market share from the big players in the sector. And even if it does, that's still not a guarantee that it will lead to much revenue growth for the company. Revenue from Amazon's physical stores, which includes Whole Foods, totaled just $16.2 billion last year, accounting for 4.2% of its top line. And sales from that segment are down by $1 billion from the $17.2 billion Amazon reported in 2018. Data from Numerator also suggests that the company hasn't penetrated much of the market, either. For the year ending March 31, Amazon and Whole Foods combined for just a 2.6% share of the grocery spend in the U.S.

That's why moving into physical pharmacies isn't a possibility that should excite Amazon investors, nor should it worry you if you have shares of Walgreens or CVS in your portfolio. While it's an intriguing opportunity for Amazon, I'm not convinced this is something that it will pursue aggressively, nor that it will become a major part of Amazon's business given the slim margin and uphill battle the company would face. For now, this is something investors should be aware of but it shouldn't guide any investment-related decisions, especially since there are much better growth opportunities to consider.