Please ensure Javascript is enabled for purposes of website accessibility
Log In Help Join The Motley Fool
Free Article Join Over 1 Million Premium Members And Get More In-Depth Stock Guidance and Research
By Reuben Gregg Brewer - Jun 10, 2021 at 7:31AM

Ironically, my top oil stock is increasingly looking to move beyond oil. But that is a big piece of its appeal, given the industry trends.

The oil industry is facing an existential crisis as the world looks to reduce the amount of carbon it generates. The dirty image has been hard to shed, even for an industry giant like TotalEnergies (TTE -4.00%), which has been working to shift gears along with the rest of the world. But for dividend investors, that's an opportunity, given that the stock is offering a huge 6.3% yield. Here's why, despite the oil industry's image problems, you should be looking at TotalEnergies right now.

It would be nice if the world could simply flip a switch and move to new, cleaner energy sources. But the last energy transition, from coal to oil, took 100 years. While it's entirely possible that electricity will replace oil more quickly, there is a huge amount of infrastructure to replace before that can happen. So, in the end, it is highly likely that oil and natural gas will be important parts of the world's energy pie for decades to come.

That's why TotalEnergies isn't giving up on these energy sources. In fact, it even expects to grow its carbon energy business over the next few years. That said, the goal is to shift the focus from oil to natural gas, which is viewed as a transition fuel between coal and renewable power. Oil is expected to fall from 55% of its business to 35% between 2019 and 2030, while natural gas will expand from 40% to 50%. Making up the difference will be TotalEnergies' "electrons" business, which is expected to triple in size from 5% in 2019 to 15% in 2030.

That may not sound like much, but TotalEnergies is a business with a $125 billion market cap, so we are talking about a very big shift. It's so important to the company's future that it changed its name from just Total to TotalEnergies in an effort to highlight that it is more than just an oil driller. And its shareholders seem to like this decision, strongly backing the company's plans in a recent proxy vote. So TotalEnergies is offering investors a mix of the new and the old, and the highest dividend yield of the energy majors.

The line in the sand

That last point is key here, given that TotalEnergies isn't the only energy major looking to transition along with the world toward cleaner alternatives. The other big names going down a similar path, BP (BP -2.24%) and Shell (RDS.B), both cut their dividends at roughly the same time that they announced their clean energy shifts. Sure, that will free up cash flow that can be put toward capital investments in the renewable power space (and debt reduction efforts), but dividend investors took a painful hit. Only TotalEnergies has so far made the commitment to both its dividend and a clean energy transition.

Notably, in 2020, TotalEnergies was very clear about its ability to sustain its dividend. Several times management stated explicitly that as long as oil averaged around $40 a barrel, it would be able to keep paying the dividend. The reason for this commitment was simple -- it understood the importance of dividends to its shareholders. That was reassuring when oil prices were low, but shouldn't be forgotten now that oil prices are back at pre-pandemic levels. 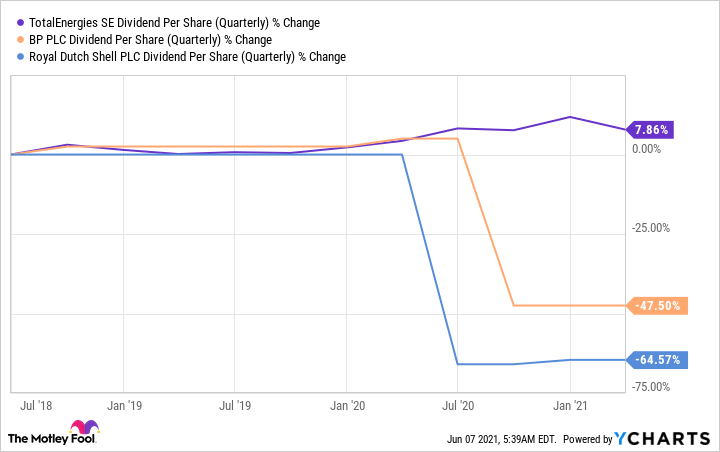 Yes, the dividend is more secure today than it was at the nadir in 2020. Of course, TotalEnergies will be able to use the extra cash flow it's benefiting from now to solidify its balance sheet and fund its energy transition. But the commitment to shareholders sets it apart, providing a better outcome for dividend investors than what transpired at BP and Shell. That commitment to shareholders is more than just a nicety. It also shows that TotalEnergies has a strong grasp on the highly cyclical nature of the oil industry and can ride the entire cycle while still rewarding investors (and not panicking or using an industry downturn to justify drastic changes that investors might find unappealing). Slow and steady is clearly TotalEnergies' long-term goal with its energy transition.

Let's be clear: Investing in the energy sector is not for the faint of heart today. There are very real issues that have to be addressed. However, the world can't simply abandon carbon fuels; they are too important. And, at this point, TotalEnergies is the only oil major that is addressing the long-term industry shift while still remaining committed to rewarding investors with consistent dividend payments. Factor in a peer-leading yield, and that sounds like a win for any investor looking at the energy sector today.