Please ensure Javascript is enabled for purposes of website accessibility
Log In Help Join The Motley Fool
Free Article Join Over 1 Million Premium Members And Get More In-Depth Stock Guidance and Research
By Parkev Tatevosian - Jun 15, 2021 at 9:36AM

These two companies are in a position to thrive as the world begins to recover from COVID-19.

During the early stages of the COVID-19 pandemic, economies around the world entered into various degrees of lockdown as part of efforts to stem the spread of the virus. Nonessential businesses were forced to temporarily close their doors to in-person patrons, many schools moved classes online, and millions of workers adjusted their commutes to work by going from their bedrooms to their home offices rather than their actual offices.

Fortunately for humanity, several vaccines have been proved to be effective in reducing the health dangers caused by COVID-19. As a result, many economies worldwide have begun a phased reopening and companies that were affected have begun their recovery.

Starbucks (SBUX -1.17%) and Chipotle Mexican Grill (CMG -0.54%) are two companies that managed the pandemic well. But these restaurants could actually do even better as a wave of customers leave their homes regularly again to actually dine out. Let's take a closer look at these two growth stocks. 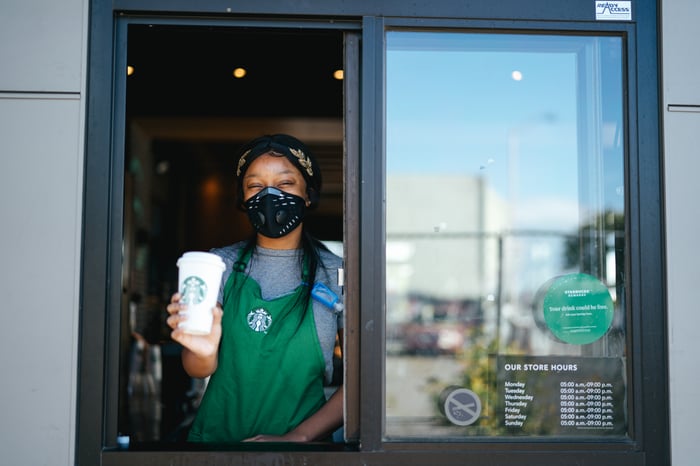 Starbucks didn't sit still during the pandemic. It took the opportunity to shuffle its physical store presence in preparation for a post-pandemic economy. The way some people work looks to be permanently changed by the pandemic. Some companies have found that many of their workers can be just as effective working from home as in the office. In response to this, Starbucks understood that its locations in downtown office centers might not be as lucrative. So it moved to close some of these stores, saving on expenses as these tended to be in areas demanding higher lease payments.

Already some of these changes are starting to bear fruit. The company's most recent quarterly report beat estimates and raised expectations for the rest of 2021. It's likely that in the aftermath of the pandemic, Starbucks could be a more profitable company. 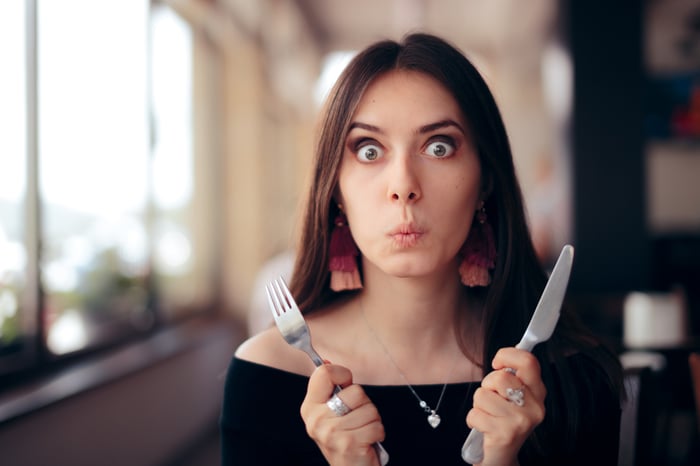 Surprisingly, sales held up pretty well for Chipotle during the pandemic. That's even though nearly all its restaurants had to close inside dining for extended periods. Credit has to be given to management for quickly adapting the business for digital orders. That side of sales surged during the pandemic as folks took to ordering meals for delivery and ordering online, then picking up food to go.

Still, that somewhat negatively affected profits as the costs of fulfilling delivery orders was not as efficient as carryout or in-store dining. Moreover, when folks order for delivery, they order less of the higher-margin drinks as they do when they dine inside. Chipotle recently introduced menu price increases to offset the costs of rising wages. As its restaurants open to diners, Chipotle's profits are likely to expand.

Moreover, Chipotle is planning on adding 200 new locations this year. The increase would be 7.1% of its current store count of 2,800. Folks have clearly taken a liking to Chipotle's products. Over the last decade, Chipotle has earned revenue at a compound annual rate of 12.5%. 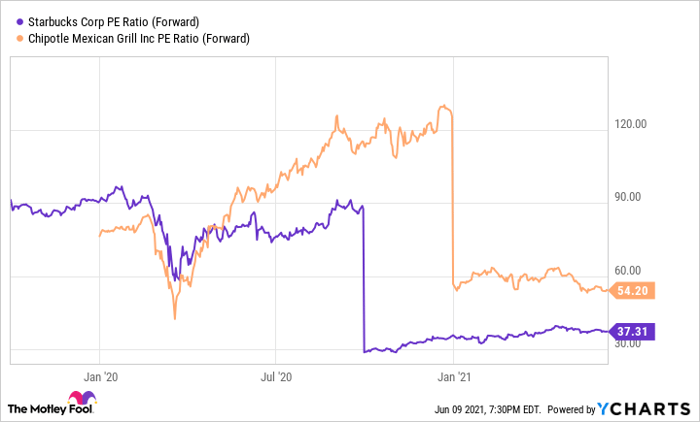 Starbucks and Chipotle have excellent near-term and long-term prospects as world economies reopen. And they're both trading at forward price-to-earnings ratios at their lowest levels since early 2020 (see chart). As a result, investors can pick up shares of these two growth stocks at a reasonable price and take advantage of the reopening growth to come.